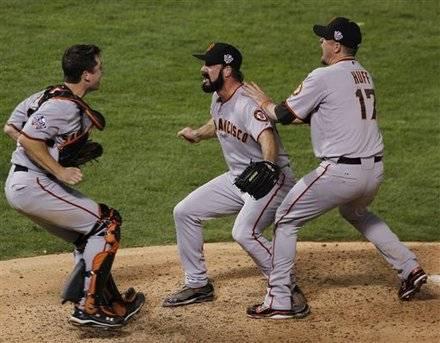 BATON ROUGE, La. – Former LSU pitcher  Brian Wilson earned the save Tuesday night for the National League in its 5-1 win over the American League at the 82nd MLB All-Star Game in Phoenix.

Wilson, the San Francisco Giants’ closer, made his third All-Star Game appearance since 2008.

With runners at second and third and one out in the top of the ninth inning, NL manager Bruce Bochy summoned Wilson, who retired Michael Cuddyer and Paul Konerko to end the game.

Wilson, who pitched at LSU from 2001-03, helped lead the Giants to the World Series title last season, recording 48 saves in the regular season and six in the postseason. The native of Londonderry, N.H. has a 6-2 record this season with 26 saves.

Wilson’s participation in the All-Star Game marks the fourth straight year a former LSU player has competed in the mid-summer classic. Wilson represented the Giants in the 2008 game at Yankee Stadium and in the 2010 game in Anaheim, Calif., and infielder Aaron Hill of the Toronto Blue Jays (AL) and outfielder Brad Hawpe of the Colorado Rockies (NL) played in the 2009 game in St. Louis.