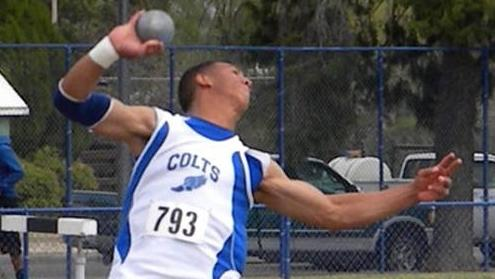 BATON ROUGE – As one of the premier prep track and field recruits in the state of Arizona for the Class of 2011, Sierra Vista native and Buena High School product Jeremy Tuttle was recently honored for his performance during his senior season as the 2011 Tucson Citizen Boys Arizona Athlete of the Year.

Tuttle, who wrapped up his prep career this season with a second-straight Arizona Interscholastic Association Division I state title in the discus, has set personal bests in four different throws in 2011.

For perhaps the most impressive individual performance by an LSU recruit at this year’s Great Southwest Track & Field Classic held June 1-4 in Albuquerque, Tuttle set three personal bests in one weekend while competing in the discus, hammer and javelin throws at the University of New Mexico.

Tuttle won the hammer throw title at the Great Southwest Classic with a personal-best mark of 198 feet, 6 inches on June 3, before taking a pair of runner-up finishes with throws of 186-10 in the discus and 201-4 in the javelin on June 4. Tuttle also set a personal best in the shot put early in the 2011 season as he threw 56-1 at Arizona’s Willie Williams Invitational held in Tucson in March.

Tuttle then returned to Albuquerque this past weekend to compete at the Region 10 Junior Olympic Track & Field Championships, where he established a new meet record in the hammer throw competition with a winning mark of 193-4. That performance broke the previous regional record by 21 feet.