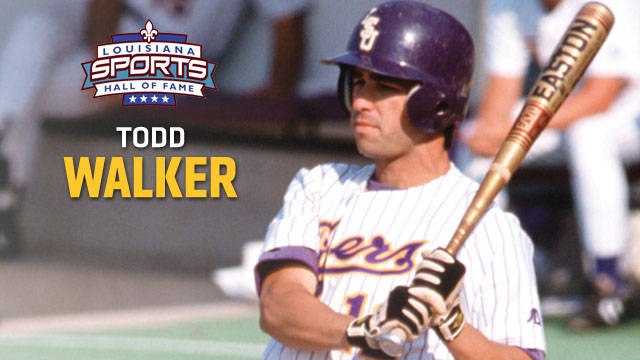 NATCHITOCHES – Todd Walker remembered the long hours of practice and dedication to baseball here Thursday in the Louisiana Sports Hall of Fame press conference that kicked off induction weekend for the class of 2011.

But at that time he didn’t dream or even think about a career that would include national championships at LSU or a 12-year major league career.

“I love to play baseball,” he said. “When I went to the cages at Alex Box Stadium until 4 a.m. after a game it wasn’t because I wanted or would be in the Hall of Fame or be in the big leagues. It was just because I love the sport.”

The induction ceremonies are scheduled for the Natchitoches Events Center at 6 p.m. Saturday evening. The ceremonies will be televised on a tape-delay basis on CST July 13.

After Coach Shows talked about the West Monroe fans that will probably bring cowbells to welcome their coach into the hall, Walker joked that he would also have a large contingent from the Shreveport-Bossier City area on hand and they will bring “something that’s louder” than cowbells for the occasion.

Walker, who will be presented Saturday night by his former college coach, Skip Bertman, is also getting into coaching these days.

“I have started my coaching career in machine-pitch baseball with my eight-year-old son,” he said. “We have our All-Star Tournament on Saturday so there will be a lot of back-and-forth between here and Shreveport, but Saturday is going to be a good day.”

Heard, who will have his Hall of Fame acceptance presented by his grandson, Will Wilton, a former director of the Pete Maravich Assembly Center.

Peter Finney wrote that Heard, the LSU Athletic Director from 1933-54, “might well be considered the father of the tremendous sports plan on today’s Baton Rouge campus.”

Heard was the one, who prior to his AD tenure while serving as graduate manager of athletics, had the idea to put up lights in Tiger Stadium and forever changed the culture of Tiger Football. He also used and beat the political system to have two major expansions of Tiger Stadium go through.

HOF NOTES – The Hall of Famers will take part in a visit ot the local Boys and Girls Club in Natchitoches before many will head to Alexandria’s Oak Wing Golf Club for the annual Hall of Fame scramble … A future Hall of Fame candidate, the recently retired Yvette Girouard, will present her former Louisiana-Lafayette player, Kyla Hall Holas, for induction at the Saturday ceremony … At times the press conference turned into a roast of kicker Anderson, especially from his two Saints teammates … Of his first game he ever saw in Indianapolis, the native of Denmark said: “It was 22 guys, and once in a while a stretcher would come in and wheel one of the guys out. Then another guy would go in seemingly content and happy to get in there” … This year’s ceremony is presented by Chesapeake Energy.