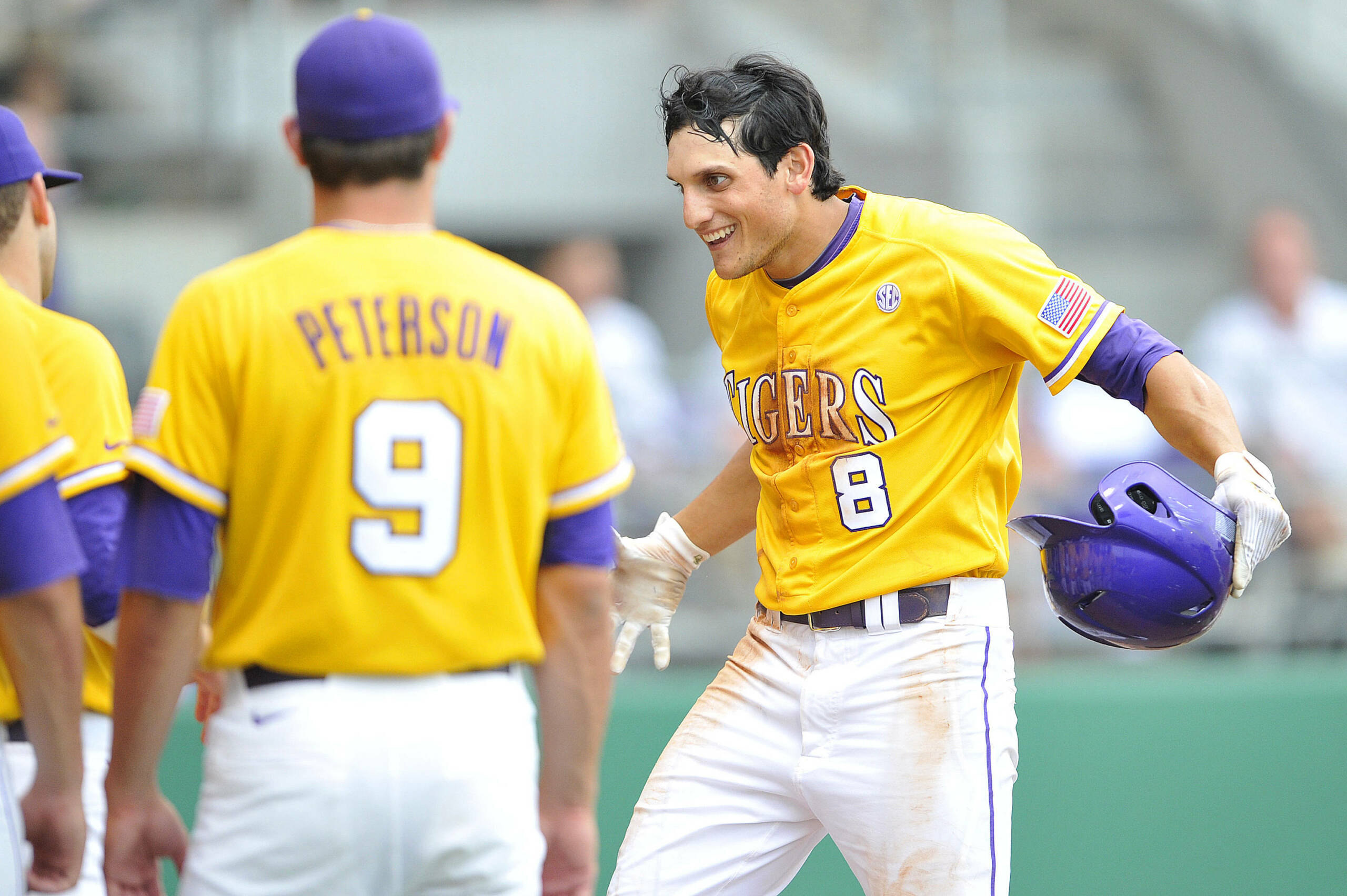 The Tigers will return to action Tuesday at 6:30 p.m. CDT when they welcome in-state foe Tulane to Alex Box Stadium. Live video, audio and stats can be accessed in the Geaux Zone at www.LSUsports.net. It can also be heard on the affiliates of the LSU Sports Radio Network.

In addition, the contest will be televised by Cox Sports Television.

Katz’s series will certainly be one to remember for the sophomore as he finished 8-for-11 with six extra-base hits — including five doubles — six RBI and six runs scored against Kentucky. Mahtook batted 2-for-4 Saturday, connecting on his 11th dinger of the season.

Designated hitter Raph Rhymes and third baseman Tyler Hanover also contributed with an RBI apiece, and the Tiger batters took advantage of numerous defensive miscues by Kentucky as the Wildcats committed five more errors Saturday and 10 for the series.

LSU starter Ben Alsup (6-4) earned the victory after giving up four earned runs off six hits in 5.2 innings. Right-handers Kevin Berry and Matty Ott provided solid work out of the bullpen as the duo limited the Wildcats to only one hit in the final 3.1 innings.

“I didn’t think we played particularly well today, but we did enough to win the game,” said LSU coach Paul Mainieri. “Mason Katz was remarkable at the plate again today, and our pitching with Alsup, Berry and Ott was very effective. It was great to get the sweep, which we really needed because we’ve dug a hole for ourselves in the SEC. I’m not proud of being 7-14 in the league right now, I wish we were 14-7, but this is where we are and we’re still fighting for significant goals. I’m very proud of our team for keeping everything we want to accomplish alive with the three wins this weekend.

“We want to be in a position where going into the last weekend of the season we’re playing for something — a division title, an SEC tournament bid, an NCAA tournament bid. That’s where our focus will continue to be, and we’re going to do everything we can to be in that position.”

LSU jumped on the Wildcats early with three runs in the first to take a 3-0 advantage. Following a lead-off walk by left fielder Trey Watkins, Katz brought him home on an RBI double. Rhymes and Hanover also drove in runs on RBI singles.

Katz launched a solo shot in the third to put the Tigers ahead, 4-0.

Kentucky cut the deficit to 4-2 in the top of the fourth. Right fielder Neiko Johnson plated a run on an RBI double, and catcher Luke Maile followed with an RBI base hit. However, LSU came right back with another run in the bottom of the frame when Katz reached on an error with two outs, allowing right fielder Alex Edward to score.

Another defensive miscue from Kentucky in the fifth gave the Tigers a run and a 6-2 lead. Second baseman J.T. Riddle, who was inserted into the game prior to the half inning, failed to turn an inning-ending double play and permitted shortstop Austin Nola to score with an errant throw to first.

The Wildcats added a pair of runs in the sixth to reduce the deficit to 6-4 with back-to-back RBI doubles from Johnson and Maile.

Mahtook drilled a two-run shot over the left field wall in the eighth to give the Tigers some breathing room and an 8-4 lead.

Ott retired the side in the ninth to close out the game.

Kentucky starter Taylor Rogers (2-6) was charged with the loss after surrendering five runs (four earned) on four hits and three walks in 3.2 innings.