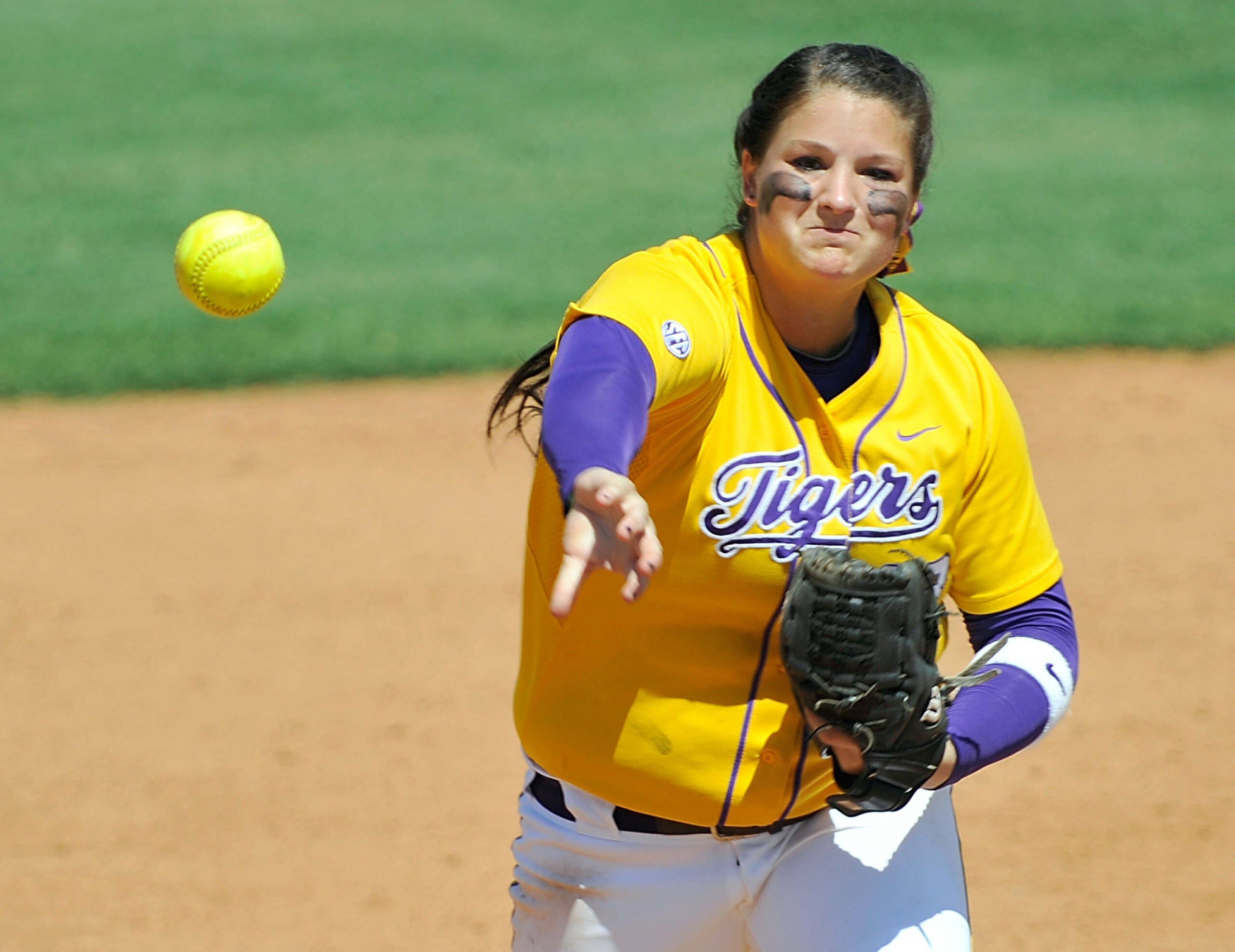 STARKVILLE, Miss. – Tammy Wray cranked a RBI double with two on and two out during the sixth inning, while Brittany Mack retired seven on the last eight batters she faced to vault the No. 21 LSU softball team to a 7-6 comeback victory over Mississippi State Saturday at the MSU Softball Field.

Ahead of Wray, Anissa Young and Ashley Langoni drew back-to-back walks to extend the frame. The Somers, N.Y., native put a 0-for-3 day in the rearview mirror and belted a 2-1 offering down the left field line to plate Young for the go-ahead run.

“I told Tammy that she had to keep battling at the plate,” head coach Yvette Girouard said. “It certainly was a team effort today. Offensively, I thought we did a lot of things well. We pushed runners into scoring position, got timely hits and the slappers were on-base to manufacture a lot of runs. It’s been the pitching that has carried us for most of the season, but we ran into a buzz saw today. There were times where we couldn’t find the plate, but kudos to the offense for coming through.”

Mack tossed 3.2 frames of two-hit relief sparked by six strikeouts. She struck out the side around a one-out single during the seventh inning to secure the 7-6 triumph and notch her 15th win of the season.

LSU carried a 5-1 advantage into the fourth inning before Mississippi State turned the tables. Jessica Cooley opened the rally with a solo home run to right field. After Brittany Gates coaxed a walk, the Tigers lifted starter Rachele Fico from the game in favor of Meghan Patterson.

A hit batter and three walks later, MSU pulled back to 5-4. Mack entered the game and Heidi Shape knocked a two-run single past a diving Juliana Santos and Jacee Blades through the middle to hand the Bulldogs a 6-5 edge. The Tigers alertly cut a runner down behind the play at second base and received a ground out to escape the inning.

“Mack did a phenomenal job of shutting the door,” Girouard said. “She came in under a tough situation. After a ground ball that had eyes against a drawn in infield, she mowed them down and did an excellent job of matching the pitch counts that I gave her before each inning.”

LSU immediately fired back with the equalizer in the fifth inning. Lauren Houston collected a one-out single to right field and moved into scoring position on a Morgan Russell ground ball. On the first pitch of the at-bat, Blades slapped an infield single. Houston scampered home on a throwing error by MSU third baseman Chelsea Raines to even the tally at 6-6.

“I wanted to get the win for my teammates, and I knew I had to step up to make sure that happened,” Mack said. “Thank goodness our offense picked me up after that hit [in the fourth inning] put them ahead. I’m proud of our hitters for making the necessary adjustments, and our team for winning a tight game like this on the road.”

The Tigers manufactured a run to open the scoring during the first inning. Simone Heyward dropped a leadoff bunt single and advanced to second base on a Santos sacrifice bunt. Young ripped a RBI double into the left centerfield gap to stake LSU to a 1-0 edge.

LSU tacked on an unearned run in the third inning and took advantage of a pair of MSU errors to make it 2-0. The Bulldogs dented the scoreboard during the home half of the frame via a Courtney Nesbit RBI single to make it 2-1.

The Tigers struck for three additional runs in the fourth inning. LSU put runners on the corners with one out and Tiffany Shaw knocked a ground ball to MSU shortstop Ali Bainbridge. She elected to throw home, but pinch runner Alex Boulet used some nifty base running to slide around the tag.

A Bainbridge fielding error scored Shaw before Young connected for a RBI single to plate Heyward after she reached on the miscue for the 5-1 lead.

“We talk about execution and playing Tiger softball,” Girouard said. “It’s been a great series so far. We know we’ll have to continue our strong hitting and pitch better if we want to earn a sweep tomorrow.”

The series finale is scheduled for Sunday at 1:30 p.m. with live audio and live stats available in the Geaux Zone on LSUsports.net. The contest also will be carried live on ESPN 104.5 FM with Patrick Wright and Matt Dunaway calling the action.

Fans are encouraged to check their local television listings as Fox Sports Network has regional coverage of the game. Leah Secondo and Cheri Kempf will serve as the announcing team.