Fico Slams Door to Push No. 21 Softball Past MSU 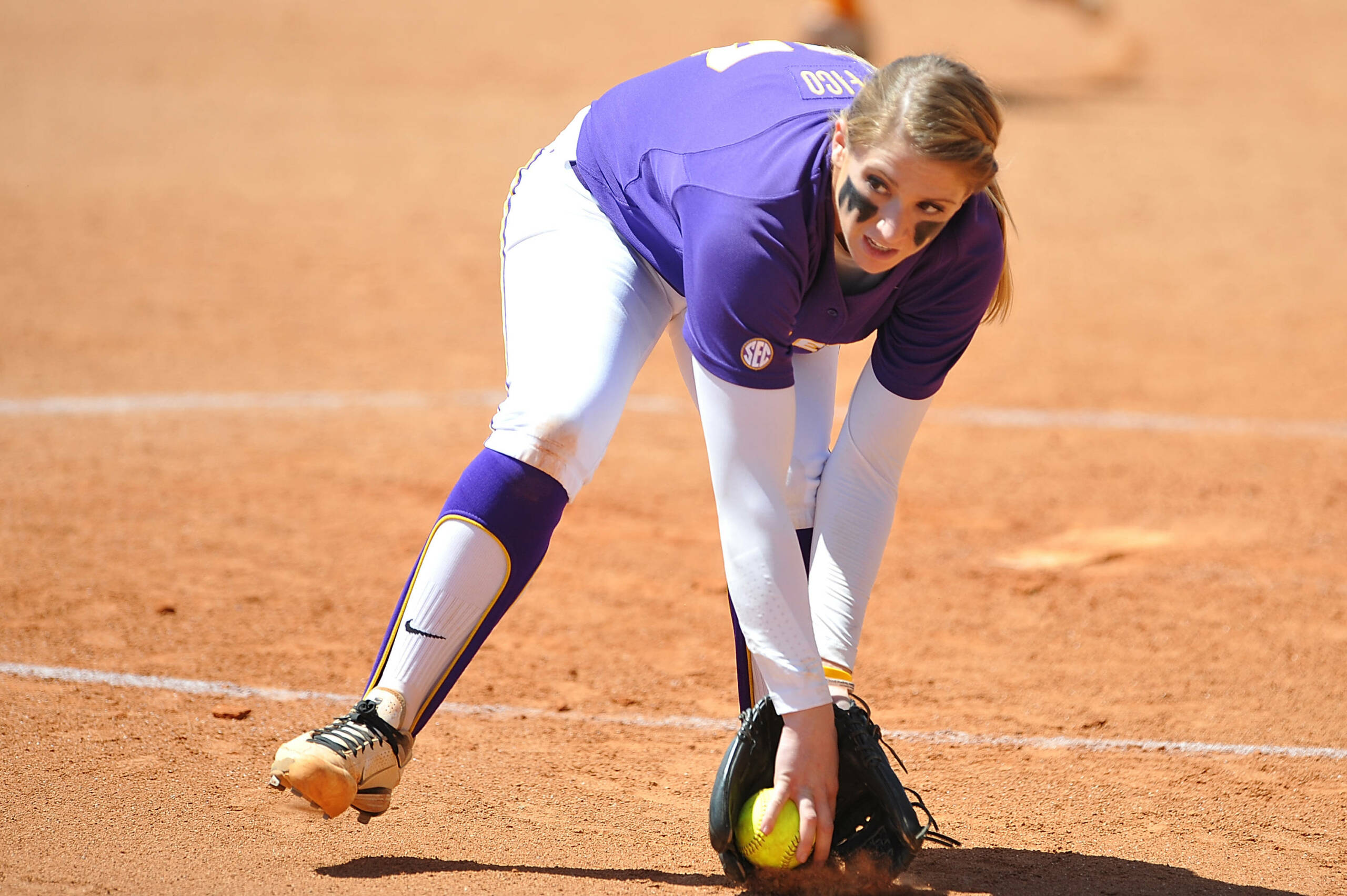 STARKVILLE, Miss. -With two runners on and no outs, Rachele Fico mowed down three consecutive batters as the No. 21 LSU softball team notched a dramatic 4-2 victory over Mississippi State Friday to open a SEC series at the MSU Softball Field.

Fico struck out Heidi Shape, Chelsea Raines and Jessica Cooley in succession to strand the tying run in scoring position. It was Fico’s first save of the season and sixth of her career.

Brittany Mack fired the first six-plus frames and sprayed two runs on eight hits. The junior right-hander racked up 11 strikeouts against three walks to move to 14-5. It was the fifth time this season that Mack reached double-digit Ks. She started the seventh with a hit batter and a walk before giving way to Fico.

“We’re very fortunate and a little lucky to escape with this road win,” head coach Yvette Girouard said. “Mack held on long enough. Although she had 11 Ks, I didn’t think she was as sharp as she’s been, but credit her for making big pitches when they had scoring opportunities. It’s a great change-of-pace because Mack is such an off-speed pitcher and then Fico comes in throwing BB’s out of the pen. The two of them are a phenomenal tandem.”

LSU manufactured a pair of runs during the third and fourth innings to grab a 2-0 edge. In the third, Jacee Blades coaxed a leadoff walk followed by consecutive infield singles by Tiffany Shaw and Simone Heyward to fill the bases. Juliana Santos picked up the first of two sacrifice flies for the game’s first run.

The Tigers struck for some two-out lightning in the fourth. Morgan Russell was hit-by-a-pitch, while Blades and Shaw loaded the bags with back-to-back infield base knocks. LSU took advantage of a Raines fielding error at third base to make it 2-0.

“Coach Girouard keeps telling us that every game counts,” Heyward said “We know we have to have focused at-bats to win games. We swung at good pitchers and for the most part we were able to stay off the junk. That’s why we were successful tonight.”

Mack worked her way out of trouble and stranded multiple runners on the base paths during the first four frames. The Bulldogs (23-27, 9-14 SEC) had a bases loaded threat of their own in the fourth, but Santos made a spectacular play on a slow ground ball off the bat of Kaili Smith to extinguish the threat.

MSU broke through for two runs in the fifth inning to tie the score. With two outs and a runner on second, Raines collected a bloop RBI double to left field. The next batter, Jessica Cooley, cranked a RBI triple off the right field wall for the equalizer.

Mack fired back and received a pop out to keep the tally at 2-2. The runs ended LSU’s stretch of 41 consecutive innings without allowing a run.

LSU seized the momentum right back during the sixth inning. Once again, the bottom of the lineup set the table as Lauren Houston smacked a single, Russell was plunked and Shaw drew a walk. On a 0-1 offering, Heyward slapped an infield single to vault the Tigers back to a 3-2 lead. Santos knocked another sacrifice fly for the final margin of 4-2.

“It’s a statement when you can come back and answer,” Girouard said. “When you don’t answer, you worry about your team losing the momentum. It was big for us to get the momentum right back after they scored.”

LSU finished the contest with 10 hits sparked by a trio of two-hit efforts from Heyward, Shaw and Anissa Young. It marked the seventh time this season that the Tigers have belted double figure hits.

“We got on, ran and had fun at times,” Girouard said. “I kept telling the slappers that we could take advantage of our speed. However, we left way too many runners on-base where we could have busted the game wide open. We had the right people at the plate, and we couldn’t deliver.”

Game two of the series is slated for Saturday at 1 p.m. with live audio and live stats available in the Geaux Zone on LSUsports.net. The contest also will be carried live on ESPN 104.5 FM with Patrick Wright and Matt Dunaway calling the action.