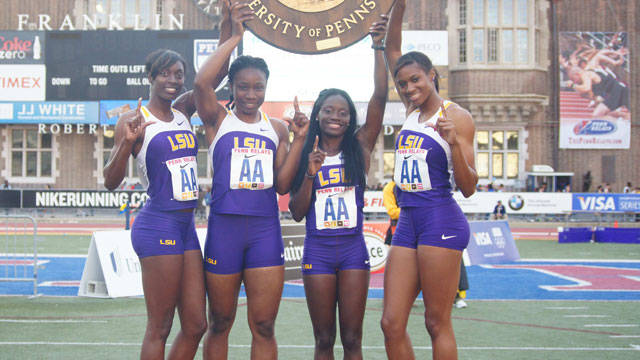 PHILADELPHIA – The No. 1-ranked Lady Tigers continued their domination of the sprint medley relay at the Penn Relays Carnival with their fifth-straight Championship of America victory, while seniors Walter Henning and Melissa Ogbourne each took home individual event championships to guide the LSU track and field teams during Friday’s action at Franklin Field.

LSU has now secured at least one Championship of America relay wagon wheel in 21-straight trips to the Penn Relays dating back to the 1991 season as the Lady Tigers have captured each of the last five titles in the women’s 1,600-meter sprint medley relay championship from 2007-11.

Not only that, but LSU athletes have won at least one individual title in the championship division for six-straight years dating back to the 2006 campaign as Henning took home his third-straight title in the men’s hammer throw and Ogbourne captured her first career Penn Relays victory in the women’s triple jump.

With Friday’s haul of three championship victories, LSU has now captured 61 Championship of America relay titles and 60 individual event titles in the 117-year history of the Penn Relays.

“We’ve enjoyed some tremendous success over the years competing at the Penn Relays. It’s special when someone comes away from this meet with a championship,” said LSU head coach Dennis Shaver. “We’re not looking to stop with just three wins. Both of our teams are still in great position to compete on the last day of the meet tomorrow. They’ve earned that with their performance these first two days.”

LSU wrapped up Friday’s action on the women’s side with its seventh Penn Relays sprint medley victory as junior Semoy Hackett (200 meters), sophomore Kimberlyn Duncan (200 meters), junior Cassandra Tate (400 meters) and senior Brittany Hall (800 meters) combined for a winning time of 3 minutes, 48.45 seconds to finish well ahead of second-place Florida (3:50.50) for the crown.

Hackett and Duncan gave the Lady Tigers a lead they would never relinquish as Tate split 54.5 on the 400 leg and Hall anchored with a 2:07.83 split on the 800 leg to give LSU its seventh Penn Relays title for the women’s 1,600-meter sprint medley relay and its fifth in as many seasons.

Henning entered Friday’s competition as the two-time defending Penn Relays hammer throw champion as he dominated the event with wins as both a sophomore in 2009 and as a junior in 2010.

And after posting a top throw of 208 feet, 3 inches on Friday, Henning became the first athlete in 51 years to win three-straight Penn Relays hammer throw championships as he finished just over two inches ahead of junior teammate Michael Lauro (206-0) for the victory. Boston’s John Lawlor was the last to win three Penn Relays hammer titles in a row when competing in 1958, 1959 and 1960.

Not only has Henning won each of the last three Penn Relays titles in the event, but he extends the Tigers’ winning streak to four in the men’s hammer throw championship as former LSU standout Rabun Fox was the first Tiger to win the event at the Penn Relays with his victory in 2008.

“The thing that I’m most proud about is that this is the fourth year in a row that LSU has won the hammer throw, so we’re hoping to keep that going,” Henning said. “It’s great to come here with LSU and come out with the win. It’s definitely special to me to finish my career with a win at the Penn Relays. I just love the atmosphere here. It’s not something that a lot of people can experience.”

Ogbourne took home the gold medal in the championship division of the women’s triple jump for the first time in her collegiate career with a  winning wind-aided jump of 42 feet, 10 ¾ inches on her third jump of the event. She finished more than four inches clear of Texas A&M’s Sasha-Kay Matthias (42-6 ¼).

“I’m very happy with my win. I was barely holding on, but I got the win today and am very happy today,” Ogbourne said. “I got second place last year, so it feels great to get the win in my last Penn Relays.”

With their performance in qualifying Friday afternoon, the Tigers provided themselves three opportunities to compete for Championships of America relay titles during Saturday’s finale of 117th Penn Relays when they line up in the finals of the 4×100-meter, 4×200-meter and 4×400-meter relays.

The Tigers will compete as the No. 1 seed in the 4×200-meter relay championship after winning their heat with the fastest time in Friday’s qualifying round.

After running the leadoff leg on LSU’s 4×200-meter relay team that qualified for the final with the fastest time, Hylton anchored the Tigers to a narrow win over Texas A&M in the second preliminary heat during the 4×400-meter relay as the Tigers (3:07.22) edged the Aggies (3:07.29) by the slimmest of margins.

The Tigers were also impressive in the qualifying for the 4×100-meter relay final as they won their prelim heat with a time of 39.81. Talley, junior Horatio Williams, Walker and Mvumvure combined for the third-fastest time of the day to finish behind only TCU (39.51) and Florida (39.79) in qualifying.

Mvumvure then led the Tigers in event qualifying as he won his preliminary heat of the men’s 100 meters with the top time of the day at 10.36 (+0.4). He will be joined in Saturday’s 100-meter dash final by freshman Rynell Parson (10.65), who secured the eighth and final qualifying spot on time.

Junior Barrett Nugent will also have the opportunity to defend the Penn Relays championship he captured in the 110-meter hurdles last season after winning his qualifying heat in 13.82 (-0.5) with the third-best of the afternoon. Nugent became the first Tiger in the 117-year history of the Penn Relay Carnival to win the men’s 110-meter hurdles championship after running 13.58 in the final a year ago.

The Lady Tigers were also outstanding in event qualifying on Friday while advancing five athletes into an individual final to run Saturday between the 100-meter dash and 100-meter hurdles.

Hackett (11.38) and Wilson (11.43) each won their qualifying heat with the two fastest times of the day in the women’s preliminaries, while freshman Toshika Sylvester (11.70) also earned a spot in the final as the eighth qualifier. Freshman Jasmin Stowers won her heat of the 100-meter hurdles with the third-fastest of the day at 13.39, while senior Tenaya Jones (13.52) will join her teammate in Saturday’s hurdle final.

Saturday’s action at the 117th Penn Relays will continue for the Tigers and Lady Tigers at 10 a.m. CDT in the field events followed by the first events on the track at noon. Live results and live streaming video this weekend can be found online at the official site of the Penn Relays at www.thepennrelays.com.