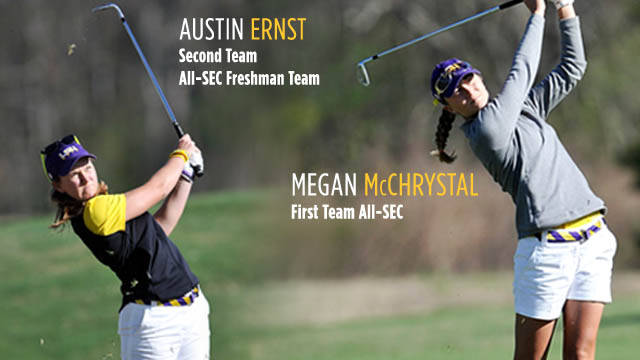 McChrystal was named first team All-SEC and Ernst was named to the All-SEC Second Team and the league’s All-Freshman team.

McChrystal, who had the second lowest stroke average in the SEC at 71.88, posted six top-five finishes in eight events, including a win in the Mason Rudolph Championship in Nashville. The Stuart, Fla., native made the All-SEC first team for the third time in her four years at LSU, just the third LSU golfer to make the first team three times (2009, 2010, 2011).

McChrystal has a chance to break her own record for single season stroke average which she set in 2009 of 72.69. The Mason Rudolph Championship win was her fourth of her career, putting her third all-time in individual wins at LSU.

Ernst won her first collegiate tournament in the spring and was second on the team in stroke average at 73.8 with three top 10s to earn not-only second team honors but freshman All-SEC honors as well. Ernst had the 14th best stroke average in the league this season and is ranked 34th in the Golfweek/Sagarin rankings.

Both McChrystal and Ernst will be in the LSU lineup when the nationally-ranked Lady Tigers open play Thursday in the NCAA Central Regional at the Warren Golf Course at the University of Notre Dame. LSU is the third seed in the field of 24 which will advance eight teams to the NCAA Division I Women’s National Championships in Bryan, Texas, May 18-21.