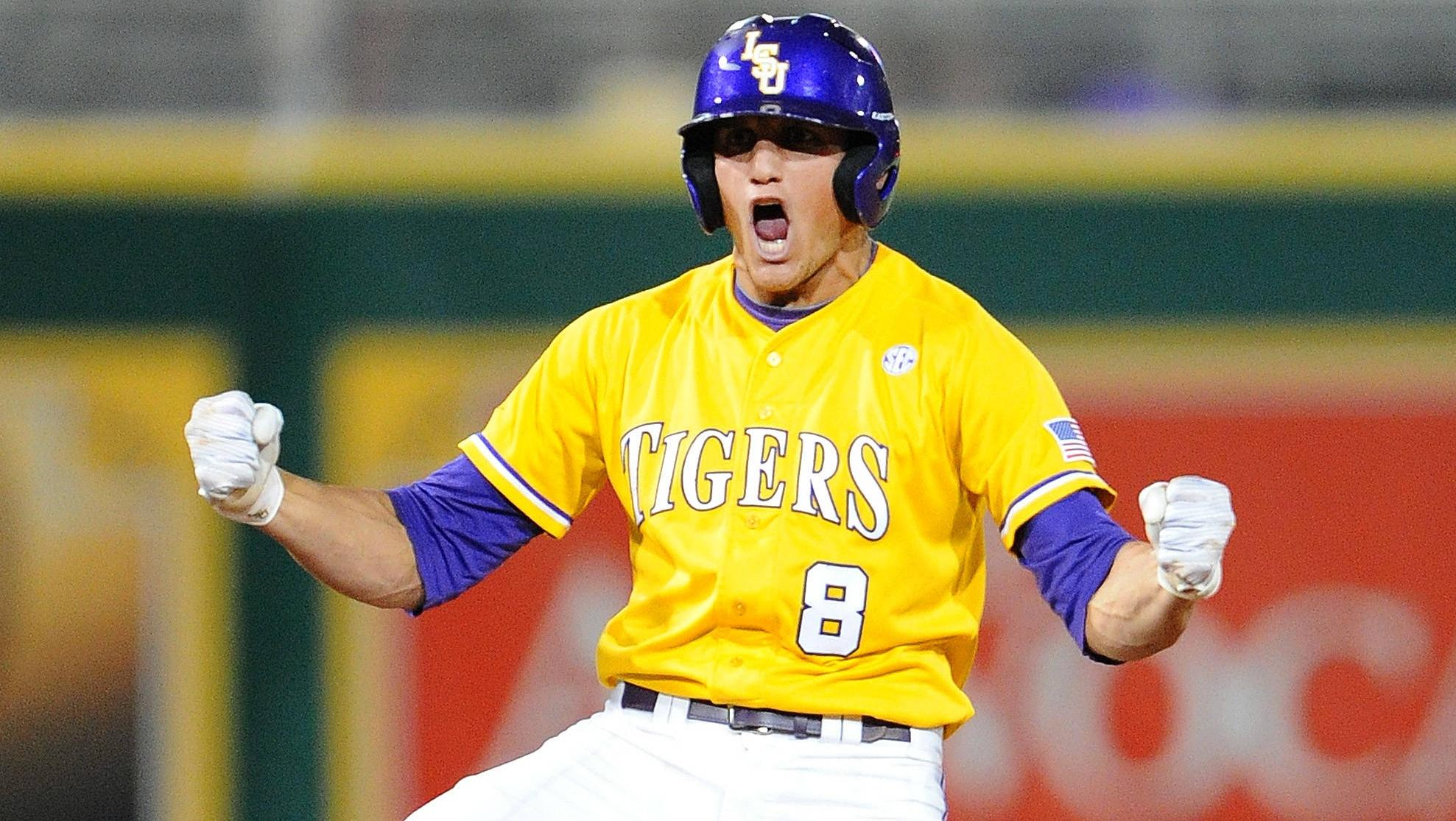 BATON ROUGE — LSU (26-17, 5-14 SEC) stormed back from four-run deficit with an enormous eight-run eighth inning to rally past Kentucky, 9-5, in Game 1 of the series Thursday night in Alex Box Stadium.

The Wildcats fell to 20-23 overall and 4-15 in Southeastern Conference play for the season.

Game 2 will begin Friday at 7 p.m. CDT. Live video, audio and stats can be accessed in the Geaux Zone at www.LSUsports.net. It can also be heard on the affiliates of the LSU Sports Radio Network.

In addition, the game will be televised by Cox Sports Television.

Trailing 5-1 in the bottom of the eighth inning, the Tigers erupted for eight runs off six hits and capitalized on several mistakes by Kentucky to surge past the Wildcats.

Catcher Ty Ross, who singled twice and drove in a run in the eighth, finished 3-for-4 with an RBI to lead the Tigers at the plate. Center fielder Mikie Mahtook also delivered a momentum-changing double in the eighth, and pinch-hitter Mason Katz provided a two-run single with LSU up, 6-5, to give the Tigers a three-run cushion.

LSU right-hander Nick Rumbelow (2-0) was credited with the victory as he pitched the top of the eighth inning for the Tigers, giving up two runs off two hits and a walk. Starter Kurt McCune kept the Tigers in the game with a solid effort, limiting the Wildcats to only two earned runs off seven hits and two walks and striking out seven in 6.1 innings.

“It was an amazing comeback and a tribute to the remarkable attitude of our team,” said LSU coach Paul Mainieri. “Our players continued to battle after we were down by four runs, and the result was a huge victory for our team. I can’t say enough about the resolve of our players and the way they overcame adversity tonight.”

LSU took the lead, 1-0, in the bottom of the third. First baseman Grant Dozar doubled, and Ross moved him to third on a single. Second baseman JaCoby Jones then grounded into a double play, but Dozar scored from third.

The Wildcats tied it at 1-1 in the top of the fourth when catcher Michael Williams drove in third baseman Thomas McCarthy on an RBI single.

Kentucky captured the lead, 3-1, in the top of the seventh. With two outs and runners in scoring position, shortstop Taylor Black came through with a clutch, two-run single into center field.

LSU threatened in the bottom of the seventh as third baseman Tyler Hanover drilled a deep fly to right with two outs and designated hitter Raph Rhymes on third, but Kentucky right fielder J.T. Riddle denied Hanover of an RBI, extra-base hit with a sensational diving catch.

Kentucky went up, 5-1, in the top of the eighth after Williams launched a two-run shot to left, but the Tiger bats came alive in the bottom of the frame with eight runs to seize a 9-5 advantage.

Dozar scored on a wild pitch, Ross came home on an RBI grounder from outfielder Trey Watkins and Jones crossed the plate when pinch-hitter Mike Lowery singled to cut the deficit to 5-4.

Mahtook then doubled to deep right center to put runners in scoring position, Nola walked to load the bases two at-bats later and third baseman Tyler Hanover plated pinch-runner Ryan Eades to tie the game when the junior was hit by a pitch. A wild pitch in the next at-bat brought home Mahtook for the go-ahead run before Katz notched a two-run single, and Ross capped the inning with an RBI base hit.

Right-hander Matty Ott closed out the game with a scoreless ninth inning.

Kentucky right-hander Braden Kapteyn (0-3), who started the game as the Wildcats’ designated hitter, was charged with the loss after surrendering three earned runs off one hit and a walk in the eighth.