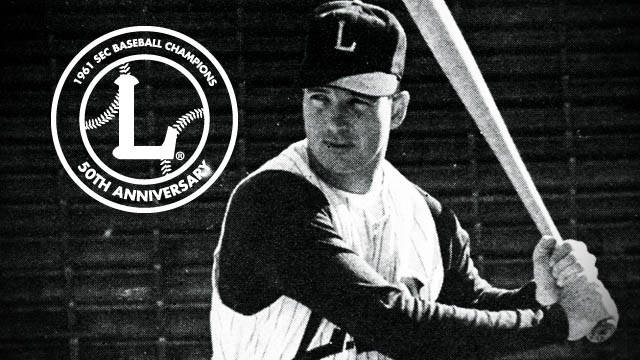 Editor’s Note:  LSU’s 1961 SEC championship baseball team is holding a 50-year reunion this weekend. Members of the team will be recognized on the field of Alex Box Stadium prior to Saturday’s game versus Kentucky.

A crowd of 2,500 LSU fans proudly cheered on the Tigers for 11 heart-pounding innings. This was not just another night in Alex Box Stadium. This was the contest for the 1961 SEC title, and LSU fought to the end.

When the season started, the young LSU team had no expectations. They simply wanted to play ball.

“The furthest thing from our minds was winning a conference championship,” said catcher Morris Summers.

Summers, a junior the year the Tigers earned the SEC crown, played alongside centerfielder John Bailey.

“We were pretty much a new team in a lot of ways,” Bailey recalled. “We just wanted to win as many ball games as we could.”

The Tigers finished the 1961 season as SEC Champions with a 20-5 record, their best record at the time since 1939.

It wasn’t until the eighth and ninth innings that the possibility of defeat started to come into play. Auburn scored two runs in the eighth, and tied the game at the top of the ninth as Plainsman catcher Joe Woods hit one of Auburn’s three home runs of the game.

LSU missed opportunities to score in the eighth and ninth innings. The Tigers’ faith, however, kept them going.

“We wanted to win that ball game so badly,” Summers said.

Then, in the bottom of the 11th inning with the score tied at 5-5, Bobby Theriot stepped up to the plate. The sophomore hit a single to score Bailey from third base.

There was confusion, however, as Auburn players congregated on the field. They claimed Theriot hadn’t touched first base. After deliberation, the umpire dismissed Auburn’s appeal.

The Bayou Bengals rejoiced, and the stadium exploded as the largest crowd to attend an LSU baseball game at the time celebrated the team’s first SEC title since 1946. Bailey said “The Box” erupted with joy like never before.

“It was the loudest roar I had heard all year,” Bailey said.

Left fielder Hadley Smith led the Tigers with a .333 average and 17 RBI on the year.  The team also possessed the talents of first baseman Jim Poche, shortstop John Thomas and third baseman Tommy Demont. Sophomore Lynn Amedee pitched all 11 innings in the final game against Auburn after All-American Allen Smith pitched for the Tigers in the previous contest.

Unfortunately, the Tigers did not travel to the NCAA playoffs that year, although they had earned the right to represent the Southeastern Conference. University policy at the time stated that the team was not permitted to play against African-Americans or teams that had African-American players.

Although they did not participate in the NCAA playoffs, the Tigers had a lot of which to be proud. Twenty-one team members received letter awards, and four players were named to the All-SEC Western Division team. MVP Allen Smith finished with a 10-2 record that season, and was also a member of the 1961 All-SEC team with Bailey. Each member of the team went on to obtain a college degree.

Summers said playing baseball gave him a goal, and served as motivation to focus on school while at LSU. He is very proud to say he is a member of the 1961 team.

“I wear my SEC championship ring every day,” he said. “It was one of the happiest times in my life.”