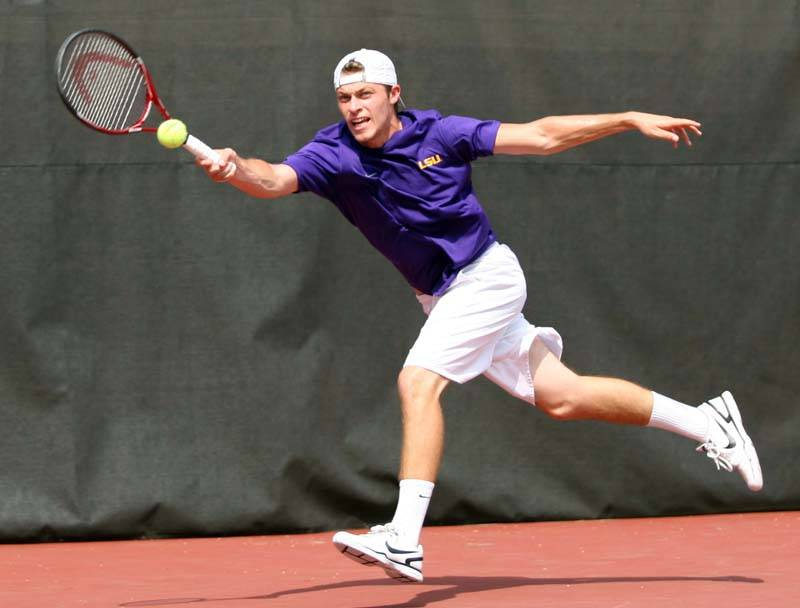 BATON ROUGE – A pair of LSU men’s tennis players were honored by the Southeastern Conference for their hard work both on and off the courts, as Neal Skupski earned Second-Team All-SEC honors and David Roberts was named to the SEC Community Service Team, the league announced recently.

Skupski, a junior from Liverpool, England, has anchored the Tigers on the top courts in both singles and doubles action this year.

In doubles, he and partner Sebastian Carlsson are currently rated as the ninth-best doubles pair in the nation by the Intercollegiate Tennis Association. The duo have been a dominant force for the Tigers at the top doubles spot, holding an 18-5 dual-match record and a 7-3 mark in conference play.  In singles, Skupski’s notched nine dual-match victories this Spring while playing on Courts 1 and 2, and is currently ranked 88th in the nation by the ITA.

This marks the third straight year Skupski has earned second-team All-SEC honors. In addition, he was named to the 2009 SEC All-Freshman team and was a 2009 ITA Doubles All-American.

Roberts, a junior from Lafayette, Louisiana, was named to SEC Community Service Team for the second year in a row for his dedication to giving back to the community.

Roberts handed out candy and took pictures with children as part of the annual Halloween BOOzar, a free event held on LSU’s campus for local children before Halloween. He also helped raise money to buy toys for the annual Thanksgiving with the Tigers event, where needy children and their families were provided a Thanksgiving meal and the kids were given several toys to take home for the holidays.

In addition, Roberts volunteers with the Big Buddy program, and participated in the “Day of the Mentor” which allowed members of the Big Buddy program to shadow LSU student-athletes in their daily campus routine. He’s also made multiple visits to Our Lady of the Lake Children’s Hospital in Baton Rouge to visit, take pictures with and spread cheer to children and their families.

In November, Roberts helped do landscaping work and construct a house in conjunction with Habitat for Humanity. Recently, he served as a volunteer leader for the Tiger Athletic Foundation’s Mike’s Kids Club Day, and also participated in LSU’s annual Spring Greening Day, where he helped plant flowers and other plants in order to beautify the campus.