In Focus: Bradshaw Excels as a Scholar-Athlete 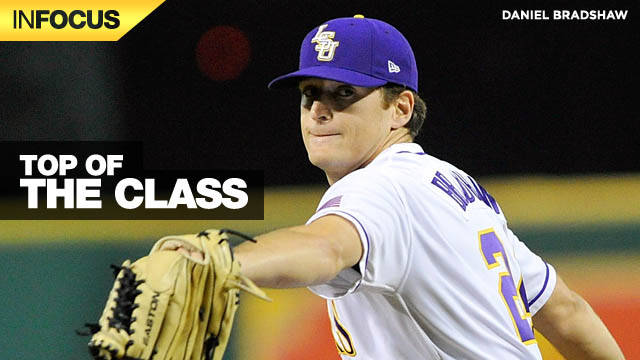 Many athletes today are accused of not being well-rounded individuals and having their priorities out of order. That cannot be said of LSU senior pitcher Daniel Bradshaw. The West Monroe, La. native finds satisfaction in many hobbies including golf and playing the guitar, and he values three things above all else.

“God, family and friends are the most important things to me,” he said.

While Bradshaw may not put baseball at the top of his priority list, there is no questioning his passion for the sport.

“Baseball has always been my first love when it comes to sports,” he said. “I’ve had so many great experiences and met so many great people playing baseball, from playing in my neighborhood when I was six years old to playing in Omaha.”

A two-time All-state selection at Ouachita Christian School, Bradshaw came to LSU as part of the stellar 2007 recruiting class which was ranked No. 1 by Collegiate Baseball magazine.

Bradshaw struggled early in his freshman season while attempting to adjust to the college game. The latter part of the season, however, is when he found his stride, notching a 3-0 record with a 2.49 ERA over his last eight appearances. Two of those appearances came in the postseason, a time of the year that the right-hander has come to enjoy.

“It becomes a do-or-die situation in the postseason,” he said. “As a team, we do really well because our backs are up against the wall. People expect much out of us and we perform very well under pressure.”

As a sophomore, Bradshaw posted a 4-0 clip with a 3.04 ERA in 50.1 innings pitched. Once again, though, the postseason is where he made his mark. In the SEC Tournament, he collected a seven-inning shutout of Georgia en route to earning an SEC All-Tournament team selection. He then tossed five shutout innings in Omaha, helping the Tigers earn the school’s six national championship.

After a bit of a disappointing regular season in 2010, the former Louisiana High School Pitcher of the Year once again found his groove when late May rolled around. For the second time in his career, he was given the ball in the SEC Tournament Championship Game. As expected, he did not disappoint, firing 6.1 innings while yielding only one run on six hits as LSU claimed its third consecutive SEC Tournament crown.

“I have always done pretty well in the SEC Tournament,” he said. “I really enjoy playing in that environment, especially in the championship game. I think a lot of my success is due to knowing that I have to step up because it is a big situation for us.”

“I feel I am a student first and an athlete second,” he said. “Sports are a big deal here at LSU, but you have to realize they are not everything.”

Planning on attending law school after graduation, the finance major credits his family for much of his success on and off the diamond.

“My family plays a big part in my life,” he said. “They have been very supportive of me since I began playing tee-ball as a little kid. They are with me every step of the way.”

Even though he appears to have his post-baseball career mapped out, Bradshaw still has things left to accomplish as a Tiger hurler. He entered this season as one of only two seniors on the Tigers’ roster. While he continues to focus on becoming a better pitcher, his leadership qualities have become vital to the young squad.

“I think of myself as a person that leads by example,” he said. “I’ve never been a very vocal person, and I find that this has been the best way for me to help the team. As a senior, though, there are times when I feel it’s necessary to speak up to the younger guys along the way.”

Following a rough few weeks of play, Bradshaw nonetheless believes this team is capable of big things. After all, the Tigers have proven to be capable of making a postseason run a time or two in the past.

“We have a very good team this year,” he said. “We have lots of freshmen pitchers that have stepped up and done really well and we have also hit the ball really well. It is just a matter of putting it all together.”

For Bradshaw personally, while the postseason cannot get here soon enough, he hopes people remember him for more than just his late-season heroics.

“My main goal ever since I began college has been for people to remember me as a great, well-rounded person first and an athlete second,” he said. “I believe that if I keep my priorities in order, people will remember me that way.”