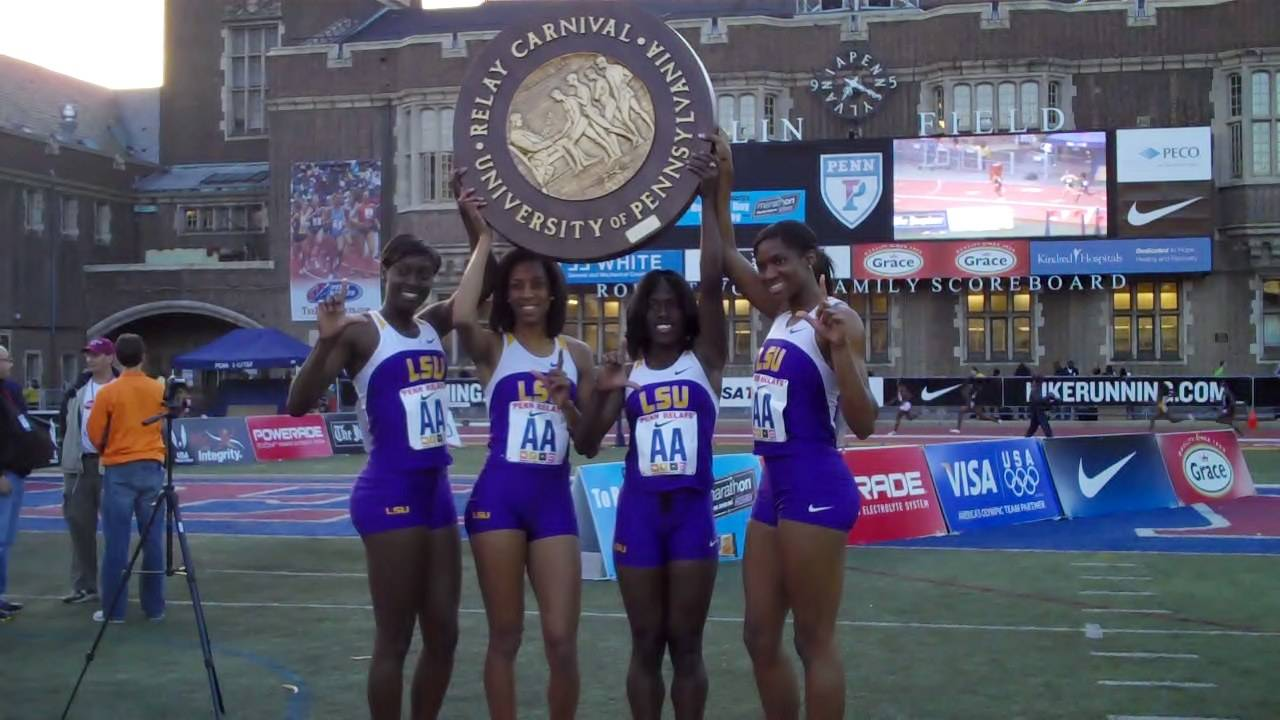 BATON ROUGE – The LSU track and field teams anticipate the last weekend in April each year as they make their annual trip to historic Franklin Field in Philadelphia to compete as part of the world’s premier relays carnival with their appearance at the Penn Relays held at the University of Pennsylvania.

This weekend will feature the 117th running of the Penn Relays Carnival as LSU will compete for the first time on Thursday. The three-day meet will come to an end with the exciting “USA vs. The World” events during Saturday’s competition at Pennsylvania’s Franklin Field.

ESPN2 will air tape-delay coverage of the “USA vs. The World” portion of the meet from 7-9 p.m. CT on Saturday night, which also includes LSU’s participation in the 4×200 and 4×800 relays.

The final event of this year’s meet will run Saturday at 5 p.m. CT as the nation’s premier men’s collegiate 4×400-meter relay teams will line up in the Championship of America final.

This weekend marks the last time the Tigers and Lady Tigers will have the chance to compete before they kick off the championship season at the 2011 SEC Outdoor Track & Field Championships, which will run from May 12-15 at Spec Towns Track at the University of Georgia in Athens.

Fans can receive live updates from the Penn Relays by becoming a fan of the LSU Track & Field page on Facebook and by following @LSUTrackField on Twitter. Exclusive interviews with LSU’s athletes and a behind-the-scenes video coverage of the Tigers and Lady Tigers competing this weekend can also be seen on the team’s social networking sites after each day of the competition.

“Competing at the Penn Relays is an experience that all of our student-athletes really look forward to each season. This is one of the truly great events in our sport,” said LSU head coach Dennis Shaver. “The meet has an atmosphere that we just don’t see anywhere else. It’s electric.

“This weekend also means that our teams have one final opportunity to compete before we get ready for a trip to the SEC Championships. The Penn Relays attracts championship caliber competition each year and this year will be no exception. We need to treat this event like we would any other championship meet.”

Teams competing at the Penn Relays each season line up with a goal of taking home one of the carnival’s signature Championship of America wagon wheels awarded to each university relay winner.

LSU is among the most successful programs all-time at the Penn Relays as the Tigers and Lady Tigers are winners of 60 Championship of America relay titles and 58 individual titles in meet history.

LSU is looking to continue an impressive streak as either the men’s or women’s team has won at least one Championship of America relay title in 20-straight seasons dating back to three victories by the women in the 4×100-meter relay, 4×200-meter relay and shuttle hurdle relay.

LSU enters this weekend’s competition as the defending Championship of America relay champion in the men’s and women’s 1,600-meter sprint medley relay. The Lady Tigers have actually won the relay title in four-straight seasons with consecutive wins from 2007-10. The Tigers have taken the event title in two of the last three seasons with victories in 2008 and 2010.

The Tigers and Lady Tigers are also among the favorites to compete for a Championships of America title in both the 4×100-meter relay and 4×200-meter relay during the meet this weekend.

The teams already swept 4×200-meter relay titles at the 84th Clyde Littlefield Texas Relays held April 7-9 in Austin as both the Tigers and Lady Tigers recorded the fastest times by a collegiate team this year. The team of Keyth Talley, Horatio Williams, Tristan Walker and Gabriel Mvumvure set an LSU school record with a winning time of 1:20.45 for the men, while the women’s team Rebecca Alexander, Semoy Hackett, Cassandra Tate and Kimberlyn Duncan ran 1:30.88 at the Texas Relays.

Other relays in which LSU will compete during the 117th running of the Penn Relays this weekend are the 4×400-meter relay, 4×800-meter relay and distance medley relay.

Three LSU athletes will also have the opportunity to defend individual titles won at the 116th Penn Relays last spring, led by senior NCAA champion Walter Henning as the two-time defending relays champion of the men’s hammer throw. Henning actually earned College Men’s Individual Athlete of the Meet honors a year ago after throwing 237 feet, 9 inches for the fifth-longest throw in meet history.

Other LSU athletes looking to defend their individual event titles at the Penn Relays this weekend include senior Brittani Carter in the women’s high jump and junior Barrett Nugent in the men’s 110-meter hurdles. Carter cleared a top mark of 6-0 to become the first Lady Tiger to win the Penn Relays high jump title, while Nugent ran 13.58 to become the first Tiger to win the carnival’s 110 hurdles championship.

At least one Tiger or Lady Tiger has won an individual championship at the Penn Relays in five years in a row since its appearance at the 112th running of the Penn Relays Carnival in 2006.