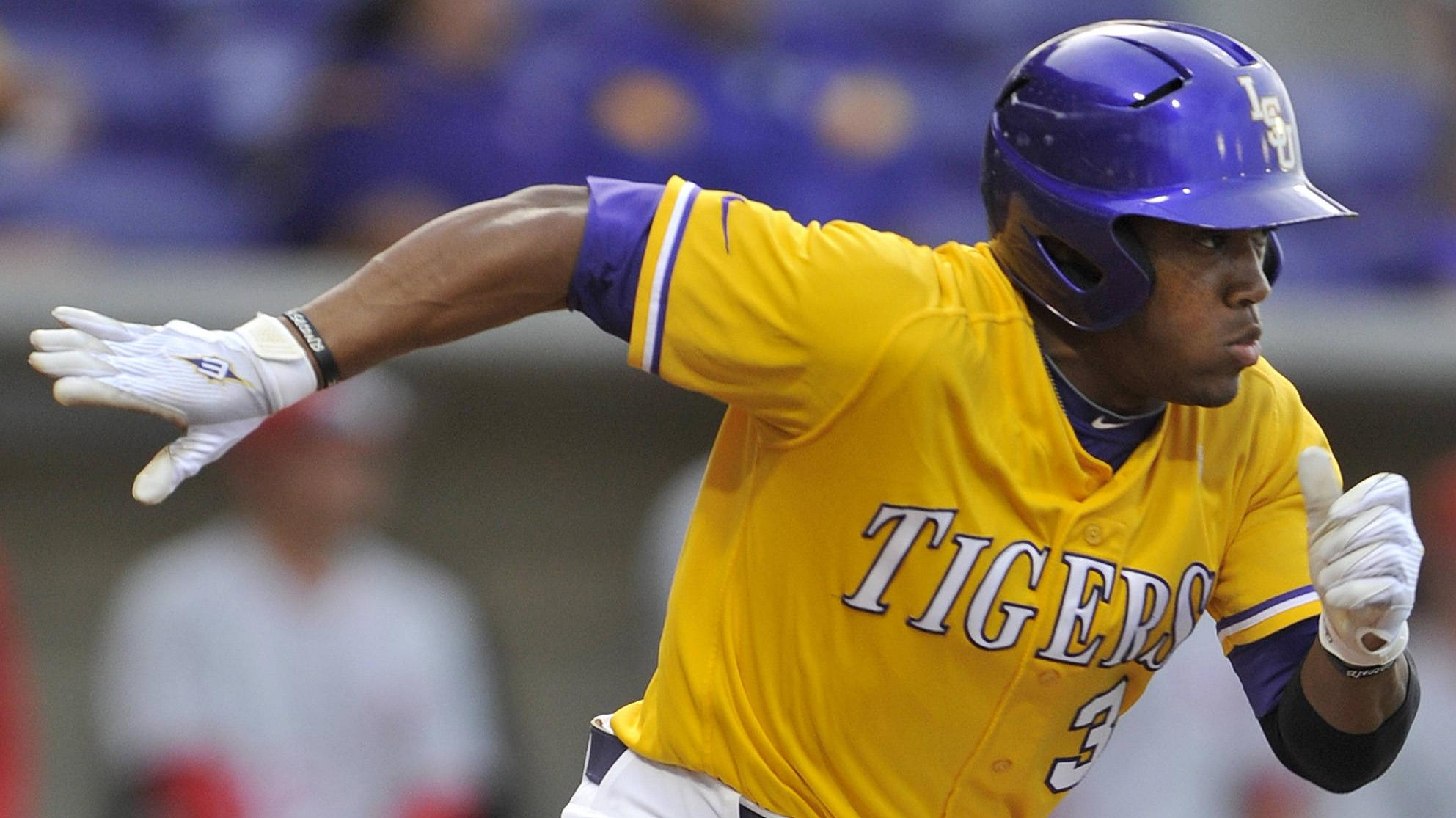 With the victory, LSU (25-17) gave Paul Mainieri his 200th victory of his LSU tenure as the Tigers’ head coach improved to 200-101-2 in five seasons at the helm. The Colonels dropped their second game to the Tigers this season and fell to 20-21 overall.

LSU will return to Southeastern Conference play Thursday at 6:30 p.m. CDT when the Tigers welcome Kentucky to Alex Box Stadium. Live video, audio and stats of the game may be accessed in the Geaux Zone at www.LSUsports.net. The game can also be heard on the affiliates of the LSU Sports Radio Network.

In addition, Thursday’s game will be televised by ESPNU.

LSU starter Ryan Eades (2-1) earned the victory after hurling a career-high 5.2 innings and allowing only two earned runs off seven hits and two walks. The freshman also struck out a career-high six batters.

Mahtook, who finished 2-for-3 with a double and two runs scored, matched his career high for stolen bases in a game with three and moved into sole possession of seventh-place on LSU’s career steals list with 55.

Hanover finished a perfect 3-for-3 with a double, two runs scored and a pair of walks, while Watkins scored twice out of the lead-off spot and contributed an RBI. First baseman Alex Edward also plated a pair of runs with a two-run homer, his second of the season.

“Ryan Eades‘ performance was a real key to the game,” said LSU coach Paul Mainieri. “I decided to extend a him a little bit tonight and give him a chance to develop. I thought he got stronger as the game moved on, and I was very encouraged by his outing.

“We had a lot of good at-bats tonight and some big hits, and it was great to see everyone in the lineup make a contribution. We talked yesterday about this now being a 15-game season, and with this win, we have 14 games left, including 12 very important SEC games. We believe we can still accomplish some very significant goals this season.”

Nicholls State emerged with an early 1-0 lead in the top of the first. Center fielder Bear Comer drew a lead-off walk, stole second base and advanced to third on a throwing error. Shortstop Chase Jaramillo then followed with an RBI grounder to short to drive in Comer from third.

LSU struck back with five runs in the bottom of the first to take a 5-1 advantage. Following an RBI base hit from Mahtook and a walk from shortstop Austin Nola, Hanover drilled a two-run double into the gap in left center. Edward then followed with a two-run dinger into the left field bleachers.

The Tigers uncorked three more runs in the second to go up, 8-1. Left fielder Spencer Ware drove in a run and showed off his speed, legging out a double on a hard grounder through the left side of the infield. Mahtook then delivered his own double to center, bringing home Ware from second.

Nicholls got a run back in the top of the third to cut the deficit to 8-2 after first baseman Blake Bergeron laced an RBI double to deep center.

Eades settled in nicely after surrendering two runs in the first three innings as the right-hander retired eight straight in the third, fourth and fifth frames.

However, the Colonels chased Eades from the game in the sixth after catcher Jason Dennis lined an RBI  single into right.

Mahtook notched his third RBI of the game on a sacrifice fly to center to put the Tigers ahead, 9-3, in the bottom of the sixth.

The Tigers pushed three more runs across in the seventh highlighted by an RBI double from catcher Ty Ross to seize a commanding 12-3 advantage.

The bullpen foursome of Daniel Bradshaw, Joe Broussard, Nick Rumbelow and Jimmy Dykstra combined for 3.1 scoreless innings in relief to shut the door on the Colonels.

Nicholls State starter Dalton Torres (2-3) was charged with the loss after giving up seven earned runs off six hits and a walk in 1.1. innings.