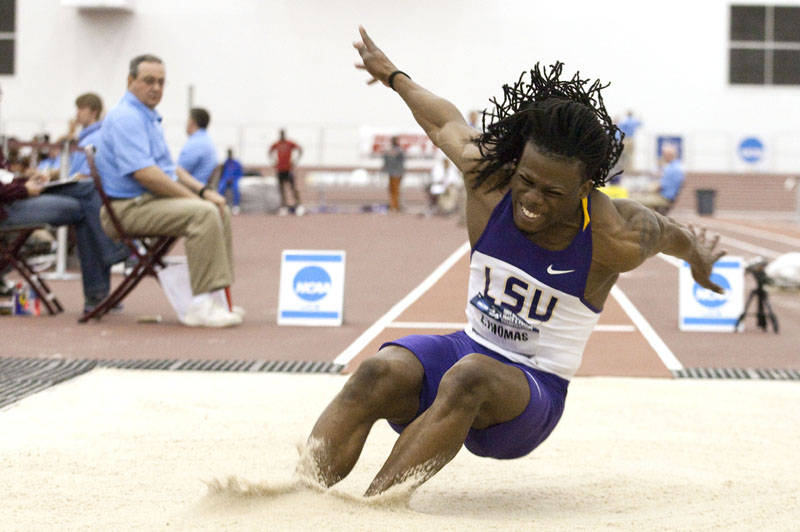 BATON ROUGE – For the second time in three weeks, LSU track and field athletes have cleaned up with exactly half of the six SEC Athlete of the Week honors announced by the league office after senior Zedric Thomas, sophomore Kimberlyn Duncan and freshman Jen Clayton were honored Tuesday afternoon.

Thomas was named the SEC Male Field Event Athlete of the Week for the second time this season, while Duncan picked up her second SEC Female Runner of the Week award and Clayton received her first ever SEC Female Freshman of the Week accolade following the LSU Alumni Gold meet on Saturday.

Thomas leaped to the top of the NCAA rankings with his victory in the men’s triple jump Saturday during the LSU Alumni Gold in Baton Rouge with a top wind-aided mark of 55 feet, 11 ¼ inches.

Thomas, who celebrated his 23rd birthday just two days prior to the LSU Alumni Gold on Thursday, had a brilliant series in which he eclipsed the 55-foot mark on three-straight jumps. He posted windy jumps of 55-7 on his second attempt and 55-0 ¼ on his third attempt before a best of 55-11 ¼ on his fourth attempt.

A senior from New Iberia, La., Thomas took over the national lead by more than one foot over his nearest competitor as Texas A&M’s Julian Reid follows in the No. 2 spot with a seasonal best of 54-8 ¾. The six-time All-American also ranks No. 13 in the NCAA this season in the long jump with a seasonal-best mark of 25-5 ½ that he set in his season opener at the LSU Tiger Relays back on March 25.

Like Thomas, Duncan has been named an SEC Athlete of the Week for the second time in 2011 following her victory in the 200-meter dash on Saturday afternoon at the Bernie Moore Track Stadium.

She became one of the fastest 200-meter sprinters all-time at the collegiate level as her wind-aided time of 22.18 seconds run with a tailwind of 3.2 meters per second ranked as the No. 3 performance under all conditions in NCAA history. She lowered her existing NCAA-leading time of 22.76 (-1.0) run on April 2.

With her performance, Duncan now owns the two fastest 200-meter performances in the NCAA this year, as Texas A&M’s Dominique Duncan trails in a distant second at 22.79w.

In addition to her victory in the 200-meter dash, Duncan also ran the anchor leg on LSU’s 4×100 relay for the first time in her collegiate career as she combined with Kenyanna Wilson, Semoy Hackett and Rebecca Alexander to win the event with a season-best time of 43.31 that ranks the team No. 2 nationally.

The reigning women’s SEC Indoor long jump champion, Clayton emerged as the favorite to add the 2011 SEC Outdoor crown to her freshman resume as she became the No. 1-ranked long jumper in the SEC with her victory on Saturday at the LSU Alumni Gold meet at the Bernie Moore Track Stadium.

She posted a top wind-aided mark of 20-6 ¼ during the competition to take the title over senior teammate Melissa Ogbourne, who finished the meet as the No. 2-ranked jumper in the SEC at 20-5 ¼w.

Not only did Clayton become the No. 1-ranked long jumper in the SEC with her performance on Saturday afternoon, but she ended the weekend as the No. 3-ranked freshman in the country in the event jumping at 20-6 ¼w for a 2011 seasonal best. Her effort is the No. 23-ranked performance under all conditions in the NCAA for the 2011 season among all collegiate competitors.