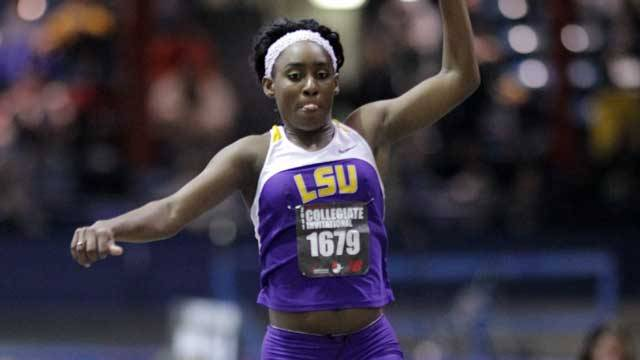 BATON ROUGE – While senior Melissa Ogbourne has enjoyed an All-American career as a member of the national power LSU women’s track and field program the past four seasons, she was recently honored for her performance in the classroom as the recipient of the Jesse Owens Athletic Award at the 26th annual Black Scholars Awards Program held on April 3.

The program, which was held at the LSU Student Union Theater, recognized minority students from each college on campus that excel both inside and outside the classroom.

Ogbourne’s selection this year marks the second time in four years that an LSU track and field athlete has received the Jesse Owens Athletic Award as former Tiger hurdler Ryan Fontenot was honored in 2008.

“I feel very blessed and very happy that my effort and hard work has been noted,” Ogbourne said. “It’s an honor for me to represent my team and university. That’s what I always try to do. I’ve been blessed with a great opportunity to compete for LSU. It’s important for me to always do the best I can for my team.”

A native of St. Catherine, Jamaica, Ogbourne credits the likes of former Lady Tigers teammate and fellow Jamaican Andrea Linton as providing a positive influence on her athletic and academic career at LSU.

“Andrea Linton used to be a roommate of mine when she competed here, and I really looked up to her for the time we were together. She really showed me what I needed to do to succeed at such a high level with my career,” Ogbourne said. “I’ve been around a lot of people who have helped me achieve at a high level. They’ve helped me believe in myself and know that I have the ability to succeed.”

Ogbourne has proven to be one of the NCAA’s elite triple jumpers during her career with the Lady Tigers as she has earned two All-America and two All-SEC honors in nearly four full seasons in Baton Rouge.

The Jesse Owens Athletic Award bears the name of perhaps the greatest track and field athlete to compete in the sport. Owens was an eight-time NCAA champion in two seasons at Ohio State from 1935-36 and is the only collegiate athlete to win four NCAA titles at two separate national championship meets.

The defining moment of Owens’ career came at the 1936 Olympic Games in Nazi-controlled Berlin, as he became an inspiration to all when he shattered Adolph Hitler’s myth of Aryan superiority by winning four gold medals in the 100-meter dash, 200-meter dash, broad jump and 4×100-meter relay. No American had won four gold medals in a single Olympics for 48 years until Carl Lewis matched the feat in 1984.

President Gerald Ford presented Owens with the United States Medal of Freedom in 1976, which remains the nation’s highest civilian honor. Owens continued to serve amateur athletics until his death in 1980.