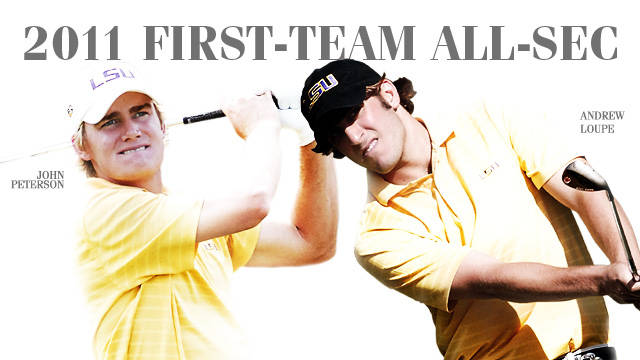 BATON ROUGE – For the first time since 1989, two members of the LSU men’s golf team have earned First-Team All-Southeastern Conference recognition for their performance during the regular season with seniors Andrew Loupe and John Peterson each receiving their second career All-SEC selection.

This also marks the third-straight season in which an LSU golfer has picked up first-team All-SEC honors as Peterson did so for the first time in 2009 followed by Loupe’s first career selection in 2010.

The duo has led the No. 8-ranked Tigers to their most successful season in more than two decades in 2010 and 2011 as the team has captured four tournament titles on the season while posting a 119-18 record with collegiate competition as it awaits a selection to the NCAA Regionals being held May 19-20.

The Tigers have won four tournament championships for the first time since the 1988-89 season when the likes of First-Team All-SEC selections Greg Lesher and David Toms wore the purple and gold. LSU is an event winner at the Gopher Invitational (Sept. 12-13), David Toms Intercollegiate (Oct. 18-19), Hootie at Bulls Bay Intercollegiate (March 27-29) and LSU National Invitational (April 2-3).

The duo has matched one another with a career high seven top-10 and 10 top-20 finishes in 11 tournament starts on the season, while Loupe leads the team with four top-five finishes to three for Peterson.

Peterson recently earned his second career top-three finish at the SEC Men’s Golf Championships after he fired a 1-under par 209 to finish in second place on the leaderboard in the event held at the Seaside Course at Sea Island Golf Club in St. Simons Island, Ga. He actually fell short of becoming the first Tiger since Toms in 1987 to win the SEC individual crown after dropping a one-hole, sudden-death playoff. He finished in a tie for first place with Florida’s Andres Echavarria after 54 holes.

Loupe finished among the Top 10 of the SEC Championships leaderboard for the second year in a row, as he tied for sixth place in the event with a score of 2-over par 212. The Baton Rouge native earned a career best finish with a tie for fourth place at the SEC Championships during his junior season in 2010.

With their performance this season, Loupe is ranked No. 19 and Peterson is ranked No. 22 nationally with the Golfweek/Sagarin Performance Index that ranks the top players at the collegiate level.