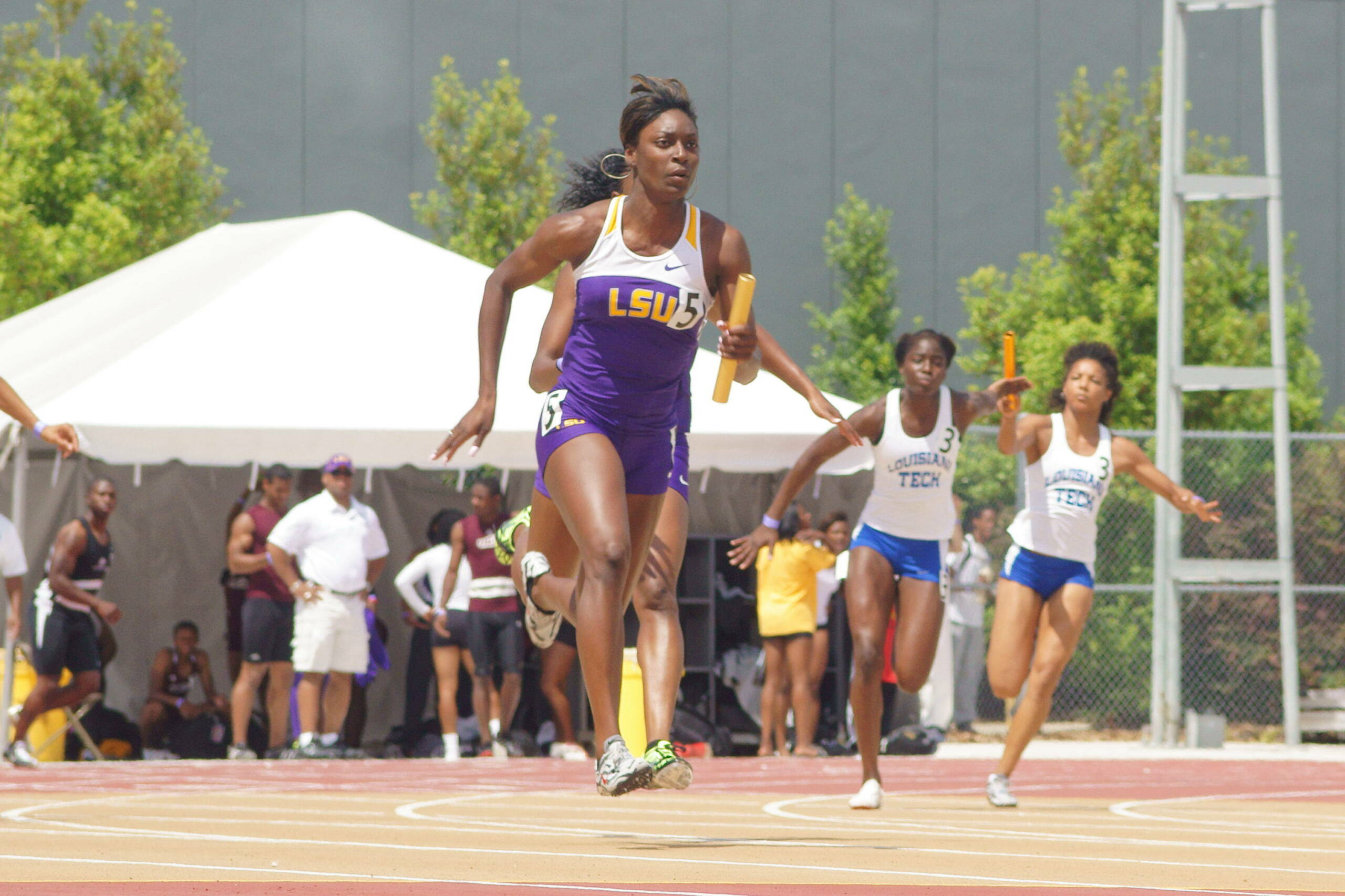 BATON ROUGE – While sophomore Kimberlyn Duncan improved upon her NCAA-leading time in the 200-meter dash during Saturday’s LSU Alumni Gold, senior Zedric Thomas catapulted himself to the top of the charts for the first time this season with a leading performance of his own in the triple jump as they set the pace on a blustery afternoon at Bernie Moore Stadium.

In addition, junior Cassandra Tate emerged as a true NCAA title contender in the 400-meter hurdles when she became the nation’s No. 2-ranked performer with her victory in the event.

The trio helped lead the Tigers and Lady Tigers to a total of six top-six performances in the NCAA during a weekend celebrating the NCAA’s most decorated combined track and field program.

“Our athletes battled through some tough conditions today with the wind, but that doesn’t really affect too much at this time of the year,” said LSU head coach Dennis Shaver. “We saw a great effort today by most all of our athletes. I was very pleased with what we were able to get accomplished here today.”

Following the festivities of the opening ceremony, LSU’s athletes kicked it into high gear on an afternoon that saw some of the strongest tailwinds in recent memory at Bernie Moore Stadium.

Duncan, who lined up Saturday as the NCAA leader in the 200-meter dash with her time of 22.76 seconds set at the LSU Invitational on April 2, might have put the No. 1 ranking out of reach for the rest of the country after clocking a wind-aided time of 22.18 (+3.2) to win her fifth-straight 200-meter championship of the season. It’s a streak that dates back to a win indoors at the Tyson Invitational on Feb. 12.

That performance ranks the NCAA Indoor champion No. 3 in NCAA history under all conditions with the 200 meters as she trails only LSU’s collegiate record holder Dawn Sowell (22.04) in 1989 and Nebraska’s Merlene Ottey (22.11w) in 1983 on the all-time collegiate list.

Duncan was certainly challenged for the 200-meter title by Murielle Ahoure, as the former Miami star ran 22.31 to finish runner-up in arguably the most exciting race of the afternoon.

If her performance in the 200 meters weren’t enough, Duncan ran anchor for the first time in her career on LSU’s 4×100-meter relay as she teamed with a new-look group of senior Kenyanna Wilson, junior Semoy Hackett and junior Rebecca Alexander for seasonal-best time of 43.31 in the first final on the track during the afternoon session. The Lady Tigers rank No. 2 in the NCAA in the sprint relay.

“That was all about rhythm,” Duncan said. “I know it was windy, but that was a much better 200 than my race a few weeks ago. She (Murielle Ahoure) really pushed me on the turn. I couldn’t let up. I’m proud of the way I ran my race today. It’s important to just keep making progress each time I get a chance to run.

“I’m also proud of what we did in the relay. There were no butterflies, even running anchor. We were just ready to go. I’m happy with the way we performed. We’re all proud of it.”

At about the same time Duncan was crossing the finish line just 22.18 seconds after the firing of the pistol for the start of the race, Thomas was leaping to the top of the national rankings in the men’s triple jump as his top wind-aided mark of 55 feet, 11 ¼ inches won the LeJuan Simon Triple Jump Invitational.

Thomas, who celebrated his 23rd birthday on Thursday, entered the meet with a previous season’s best 54-1 ¼ wind-aided in a runner-up finish at the Texas Relays on April 9.

“Everybody’s always asking what you want for your birthday. All I said was 56 feet,” Thomas said. “This isn’t quite 56 feet, but it’s close. I’ll take it. To do something like this in my last home meet as a senior on Senior Day is a dream come true. I felt really good jumping at Texas a couple of weeks ago, an I’m trying to get better each time I go out and compete. I need to build the consistency I need.”

Tate enjoyed a short-lived appearance at the top of the NCAA rankings in the women’s 400-meter hurdles after shattering her own personal record in the event with a winning time of 56.31 on Saturday. She won a fourth-straight 400-meter hurdles title by nearly three second over Minnesota’s Sharyn Dahl (59.25).

Just when it appeared Tate would take over the NCAA lead in the event, North Carolina Tar Heel LaToya James ran 55.83 to win the 400-meter hurdles crown at the ACC Championships in Durham, N.C.

Tate’s previous personal best of 56.87 was set in qualifying for the national semifinal a season ago for the NCAA East Preliminary Rounds in Greensboro, N.C., while her previous 2011 seasonal best of 57.02 was set in winning the event championship at the Hurricane Alumni Invitational in Miami just last weekend.

“I had a great practice with Coach Debbie (Parris-Thymes) on Wednesday, and she kept saying that I was ready to run a really fast time,” Tate said. “I was actually scared to look at the board because it was really windy running the homestretch, but I was very happy when I saw the time. I was just trying to really push it the last 150 meters. That’s where the race really starts.”

Two other LSU jumpers moved into the Top 5 of the national rankings with their performance Saturday at the LSU Alumni Gold as senior Marcus McGehee set a new lifetime personal best in the men’s pole vault and sophomore Damar Forbes set a new season best in the men’s long jump in two runner-up finishes.

The duo finished the competition tied for the No. 5 spot on the NCAA list in the outdoor season. Peterson was the NCAA Indoor runner-up in the pole vault earlier this year.

Saturday proved to be a big day for LSU pole vaulters as sophomore Joseph Caraway tied for fifth overall with a seasonal best clearance of 16-8, while senior Kyle Rose cleared a new PR of 16-8 to take ninth and freshman Chris Watson cleared a PR of his own at 16-2 to tie for 11th place.

Forbes enjoyed an NCAA top-five performance of his own in a second-place finish in the long jump as he soared 26-1 ½ on his second jump of the competition. But Forbes’ best jump was recorded with a tailwind reading 5.9 meters per second, well over the allowable +4.0 tailwind for NCAA qualifying purposes. That happened yet again when he posted a wind-aided mark of 26-1 (+4.1) on his fifth attempt of the final.

But Forbes would not be denied on his sixth and final jump of the afternoon as he jumped 26-0 ¼ with the help of a slightly aided tailwind of 2.6 meters per second for the No. 5-ranked jump in the NCAA.

Just one week after moving into the Top 10 of the NCAA rankings with a victory at the Hurricane Alumni Invitational, junior Michael Lauro won the men’s hammer throw at the LSU Alumni Gold on Saturday, as he unleashed a new personal record of 218-10 on his third attempt that help up through the final.

One of the most impressive wins of the afternoon was earned by NCAA title contender Barrett Nugent, as he ran 13.35w (+2.5) to win his fourth-straight 110-meter hurdles championship of 2011. Among the stars taken down by Nugent on Saturday was Ryan Brathwaite, the reigning World champion from Barbados.

The two were running stride for stride through the first nine hurdles before Brathwaite crashed going over the 10th and final hurdle of the race. LSU alum Ryan Fontenot finished runner-up to Nugent in 13.51w.

Saturday’s competition also allowed for experimentation on both of LSU’s 4×100-meter relay teams. LSU followed its win in the women’s sprint relay with a victory in the men’s final as the new-look foursome of junior Keyth Talley, junior Horatio Williams, senior Tristan Walker and senior Gabriel Mvumvure posted a time of 39.12 while running through some challenging conditions on the track.

“We need to have people prepared for anything that can happen. We feel like we’ve got some depth in our relays, and we were able to work with different groups here today,” Shaver said. “With some getting their first chance to run on the relay today in some tough conditions, I thought they did a tremendous job. It’s a problem we like to have. We need to have a strong lineup to make a run at an NCAA title.”

LSU athletes also set a number of 2011 seasonal bests that are sure to qualify for the NCAA East Prelims, led by a No. 10-ranked performance this season by senior Tenaya Jones in the 100-meter hurdles.

While running with a tailwind of 3.3 meters per second, Jones finished fourth in the championship final in 13.05 to tie for the No. 10 spot on the national list this season. Freshman Jasmin Stowers was second only to Lolo Jones (12.74) with her second-fastest performance of the season at 12.93.

With junior Semoy Hackett winning the women’s 100-meter dash title with a windy 11.08 (+2.5), she was followed by senior Kenyanna Wilson (11.26w) and Toshika Sylvester (11.39w), who each set new season bests allowed for NCAA qualifying. Wilson’s time actually ranks No. 16 in the NCAA this spring.

Other notable personal bests that were set during this year’s LSU Alumni Gold included a run of 54.03 by Siedda Herbert in the 400 meters and a time of 4:30.91 by Laura Carleton in the 1,500 meters.

The Tigers and Lady Tigers wrap up the regular season next weekend with the annual trip to Philadelphia, Pa., where they will compete in one of the world’s foremost attractions in track and field with the running of the 117th Penn Relays Carnival at historic Franklin Field at the University of Pennsylvania. The meet is set to run four days beginning Wednesday in one of the truly historic venues in all of track and field.