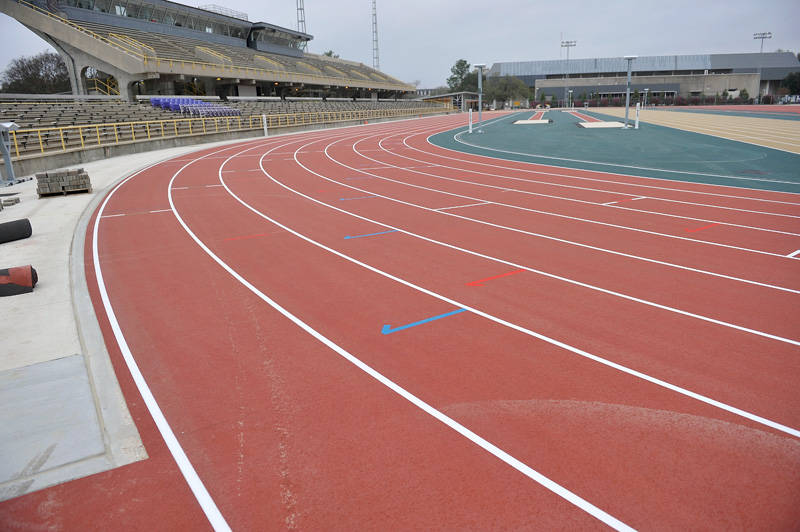 BATON ROUGE – As part of Saturday’s opening ceremony at the LSU Alumni Gold meet, a dedication of the newly renovated Bernie Moore Track Stadium will be held near the finish line at 2 p.m. CDT, with members of the construction team being recognized for their work on the nine-month project.

Speaking on behalf of the LSU administration will be Senior Associate Athletic Director Verge Ausberry. R. Ryan Faulk of Holly & Smith Architects and Dwayne Honore of D. Honore Construction, Inc. will also attend the dedication ceremony and be honored for their construction of the new track surface.

As part of the dedication, a time-lapse video will be shown on the high definition video screen illustrating the track’s construction followed by a ribbon-cutting ceremony at the finish line.

After breaking ground in July 2010, the renovation of the Bernie Moore Track Stadium was completed in March prior to LSU’s outdoor home opener at the LSU Tiger Relays.

As part of the $4.5 million renovation, the track was replaced with a brand new Mondo FTX surface with an increase in the radius of the 400-meter oval and widening of the nine 48-inch lanes. Mondo FTX is the same surface used at the “Bird’s Nest” in Beijing, China, during the 2008 Olympic Games, and is also set to be used again for the 2012 Olympic Games being held in London.

In addition, the newly-sodded throws field is located at the South end of the Bernie Moore Track Stadium with two intersecting javelin runways and two hammer and discus cages.

The dedication ceremony is only part of what is sure to be a celebratory weekend for members of the LSU track and field program as the team is set to host its second-annual LSU Track & Field Team Awards and Alumni Recognition Banquet on Friday night at the Pete Maravich Assembly Center. The Alumni Gold is set to run Saturday, and will also feature alumni and senior recognitions during the event.