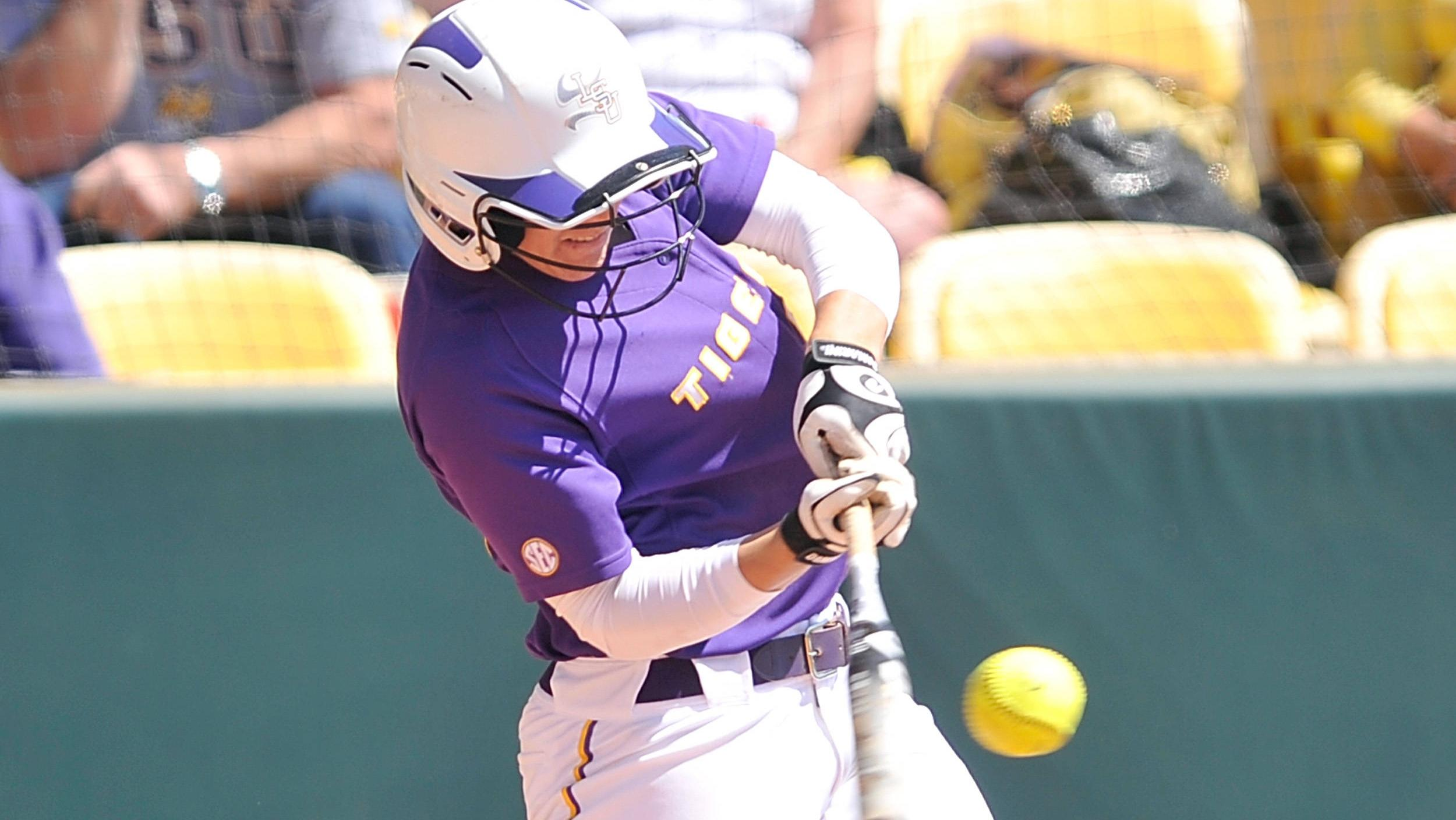 AUBURN, Ala. – Ashley Langoni and Juliana Santos teamed up for a 7-for-14 performance and six RBIs as the No. 23 LSU softball team got back on the winning track with 7-3 and 1-0 triumphs over No. 25 Auburn Wednesday at Jane B. Moore Field.

With the victories, LSU (28-15, 10-9 SEC) jumped Auburn (32-14, 11-11 SEC) to move into sole possession of second place in the SEC Western Division race. Rachele Fico and Brittany Mack also put together solid pitching performances to earn their 11th wins for the Tigers in the circle.

“Our kids were extremely focused at the plate and our pitchers threw well,” head coach Yvette Girouard said. “The players were very confident, loose and mature at the plate. It was great to see Ashley Langoni, Juliana Santos and Tammy Wray swinging the bat aggressively. I was very wary of Auburn. They made a lot of nice plays, but we made a few more to get the wins.”

LSU continues a stretch of nine of 10 games away from Tiger Park with a weekend series at Ole Miss. Friday’s series opener is set for 5 p.m. and is televised by ESPNU. Cara Capuano and Cheri Kempf will serve as the broadcasting team.

Live audio and live stats for all three games of the series will be available in the Geaux Zone on LSUsports.net in addition to being carried live on ESPN 104.5 FM with Patrick Wright and Matt Dunaway calling the action.

Langoni and Wray provided multi-hit performances to spark the LSU offense as the Tigers took control of the contest behind a five-run third inning.

Tiffany Shaw opened the frame and reached on a fielding error by Auburn pitcher Lauren Schmalz. Santos smacked a RBI double down the right field line to vault LSU to a 1-0 edge. After Anissa Young was hit-by-a-pitch, Langoni cleared the bases with a three-run bomb to centerfield to extend the lead to 4-0. Two batters later, Wray added a solo shot of her own to cap the five-run inning.

LSU pushed it to a 6-0 advantage as Langoni picked up her fourth RBI of the game on a squeeze bunt with two outs.

Auburn drew back to 6-3 after scoring runs during the fifth and sixth innings. Kyndall White connected for a two-run homer followed by a RBI single. With the bases loaded and two outs, Mack dug deep to escape a jam with a ground ball back to the circle.

“Mack was completely in control, but ran into a little trouble towards the end,” Girouard said. “She made some great pitches to get herself out of that trouble, and I thought did a phenomenal job of fielding her own position.”

LSU tacked on an insurance run in the seventh inning. With runners on the corners and one out, Morgan Russell stole second base. On an errant throw, pitch runner Katie Guillory scampered home for the final margin of 7-3.

Mack went the distance to secure her 11th win of the season to match her total for her freshman campaign. She garnered four strikeouts and was touched up for three runs, two earned, on six hits.

Fico tossed a three-hitter and mixed in seven strikeouts to claim her 11th win of the season. She sat down 12 of the first 14 batters she faced and carried a no-hitter into the fourth inning.

With one out in the first inning, Santos cranked a double down the left field line. Two batters later, Langoni ripped a RBI single into the right centerfield gap for the game’s only run.

Fico made the run stand up and stranded runners in scoring position during the third, fourth and fifth innings.

Lauren Guzman knocked a leadoff single for Auburn in the seventh inning. On the first pitch of the sequence, Elizabeth Eisterhold’s bunt attempt went foul towards the backstop. LSU catcher Lauren Houston made a diving catch and alertly threw down to Santos covering second base. She tossed the ball back first to Jacee Blades for the double play.

“Rachele threw very hard and did a magnificent job of keeping Auburn off balanced,” Girouard said. “The double play was huge in that game. Not only did Lauren make a fantastic catch, she made the right decision to throw down because she had the runner caught off the bag.”

Santos, Langoni and Simone Heyward provided two hits apiece to fuel LSU’s offense.
“We came in with a plan on offense to have focused at-bats and not over swing,” Santos said. “I felt we executed that well and swung at our pitches during both games. We came together as a team, and our goal is to keep this momentum through the weekend ahead at Ole Miss.”