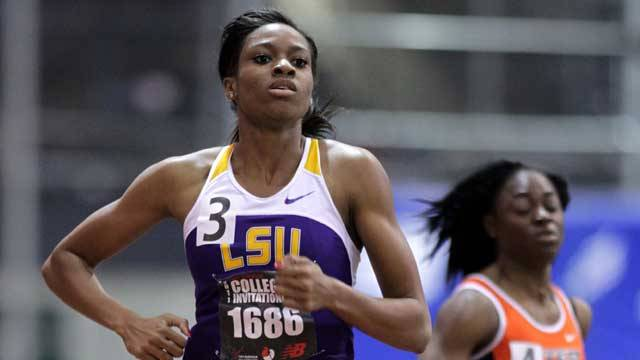 CORAL GABLES, Fla. – Not even a two-hour rain delay could slow down the LSU track and field teams during Saturday’s Hurricane Alumni Invitational, as the Tigers and Lady Tigers combined for five Top 10 performances in the NCAA this season while winning 13 event titles at Miami’s Cobb Stadium.

Lady Tiger All-Americans Semoy Hackett and Cassandra Tate each enjoyed performances that rank them among the top five of the NCAA this season in the 200-meter dash and 400-meter hurdles.

The Tigers featured three of the NCAA’s Top 10 performances in 2011 as senior Gabriel Mvumvure took home the 200-meter title, junior Riker Hylton won the 400-meter title and junior Michael Lauro claimed a hammer throw championship to lead the way for the Tigers during the meet.

With just three meets remaining before the start of the NCAA East Preliminary Rounds, LSU athletes will compete with the goal of qualifying for the first and second rounds of the 2011 NCAA Division I Outdoor Track & Field Championships to be held at E.C. Billy Hayes Track in Bloomington, Ind., on May 26-28.

The top 48 performers in each individual event and the top 24 relay teams that declare for the postseason in both the East and West regions will compete in the NCAA Preliminary Rounds. E.C. Billy Hayes Track on the campus of Indiana University will serve as the East site, while Hayward Field on the campus of the University of Oregon in Eugene will serve as the West site.

In all, 96 individuals and 48 relays teams nationwide will compete at the preliminary rounds at the NCAA Outdoor Championships scheduled to run on the last weekend of May.

Drake Stadium at Drake University in Des Moines, Iowa, will play host to the semifinal and final round at the 2011 NCAA Division I Outdoor Track & Field Championships from June 8-11.

“I’m very pleased with what I saw from both of our teams today,” said LSU head coach Dennis Shaver. “I don’t know that I really expected this today. You just never really know what to expect when you come to a place like Miami for a meet over Spring Break and what the mindset is going to be. We had a number of athletes who came here to get something done today, and they certainly did that.

“And it wasn’t easy by any means. It was very challenging for us today having to come back from a delay of more than two hours and get ready to compete. We saw some tremendous performances.”

Hackett certainly made her outdoor debut count in the 200-meter dash as she blazed to a season-opener of 22.92 to catapult herself all the way into the No. 4 position on the national list this spring.

In a wind-legal race that was run with a tailwind of 1.7 meters per second, Hackett finished runner-up just to former Miami Hurricane star and U.S. Olympian Lauryn Williams of Saucony (22.65). An Olympian in her own right from Trinidad & Tobago, Hackett is sure to contend for a national title this season for the 200-meter dash after picking up her first career All-America honor in the event indoors in March.

Mvumvure followed Hackett with an NCAA Top 10 performance of his own in his 2011 outdoor debut in the 200-meter dash as he captured the men’s championship late Saturday night by running a wind-legal PR of 20.67 to move into a tie for the No. 8 position among collegians this season.

A senior from Harare, Zimbabwe, Mvumvure clocked in at 20.67 to defeat Lalonde Gordon (20.70) in the first section. LSU senior Tristan Walker won the second section with a wind-legal PR of 20.81 to finish in third place overall in the competition. Walker entered the meet with a previous PR of 21.00.

Tate, who made her debut in the 400-meter hurdles as a sophomore at the Hurricane Alumni Invitational a year ago, won her third title in three appearances this spring as she cruised to an easy victory in 57.02 seconds, finishing well ahead of the 58.26 run by Miami freshman Thandi Stewart. With her performance, Tate moved up two spots from No. 7 to No. 5 on the NCAA performance list for the 2011 season.

The reigning SEC Outdoor 400-meter hurdles champion boasts a lifetime personal record of 56.87 set in a qualifying performance at the NCAA East Preliminary Rounds in Greensboro, N.C., in 2010.

Lauro opened the competition in the meet’s first event by soaring into the Top 10 of the NCAA standings, throwing a 2011 seasonal best of 216 feet, 2 inches to capture the men’s hammer throw title.

Lauro, a 2010 NCAA Championships finalist who owns a personal record of 217-8 in the event, moved to No. 9 on the collegiate performance list this spring with his victory after entering the Hurricane Alumni Invitational with a 2011 seasonal best of 210-6 set last weekend at the 84th Clyde Littlefield Texas Relays.

Hylton followed by taking the 400-meter championship with an outdoor seasonal best of his own, running the NCAA’s No. 10-ranked time this season at 45.93 seconds to finish well ahead of the runner-up time at 46.74 by 2008 NCAA Indoor 400-meter champion Andretti Bain of Pure Athletic Group. Hylton owns his personal record of 45.92 that was set while competing for Essex County College as a freshman in 2009 on the final at the National Junior College Athletic Association Outdoor Championships.

“I don’t think there’s any doubt that we’re a better team as I talk to you tonight than we were when we got here this morning,” Shaver said. “I’m very proud with the mental toughness we showed today. Our goal is to get a little better each time we go out and compete. That’s the expectation we have for our athletes.”

Just one week after becoming the new NCAA leader in the 110-meter hurdles, junior Barrett Nugent ran a Cobb Stadium facility record on Saturday evening by taking the title with a wind-legal 13.61.

Nugent, the reigning SEC Male Runner of the Week, became the second-fastest hurdler in NCAA history under all conditions with his victory at the Texas Relays last weekend as he clocked a wind-aided 13.19 at Mike A. Myers Stadium to grab the No. 1 ranking in the NCAA for the 2011 outdoor campaign.

Adding event wins for LSU’s final total were juniors Rachel Laurent in the pole vault (13-3 ½) and Samia Stokes in the discus (164-3), and freshman Karen Henning in the hammer throw (177-8).

Hinton actually shattered her previous PR of 158-4 by nearly 16 feet early in the afternoon as her throw is the No. 8-ranked performance in the history of the LSU women’s track and field program.

After spending a few days on South Beach for Spring Break, the Tigers and Lady Tigers will return home to Baton Rouge on Tuesday night before playing host to the LSU Alumni Gold meet on April 23 at the Bernie Moore Track Stadium. As part of the festivities, the Tigers and Lady Tigers will also host a second annual LSU Track & Field Team Awards and Alumni Recognition Banquet on Friday night.