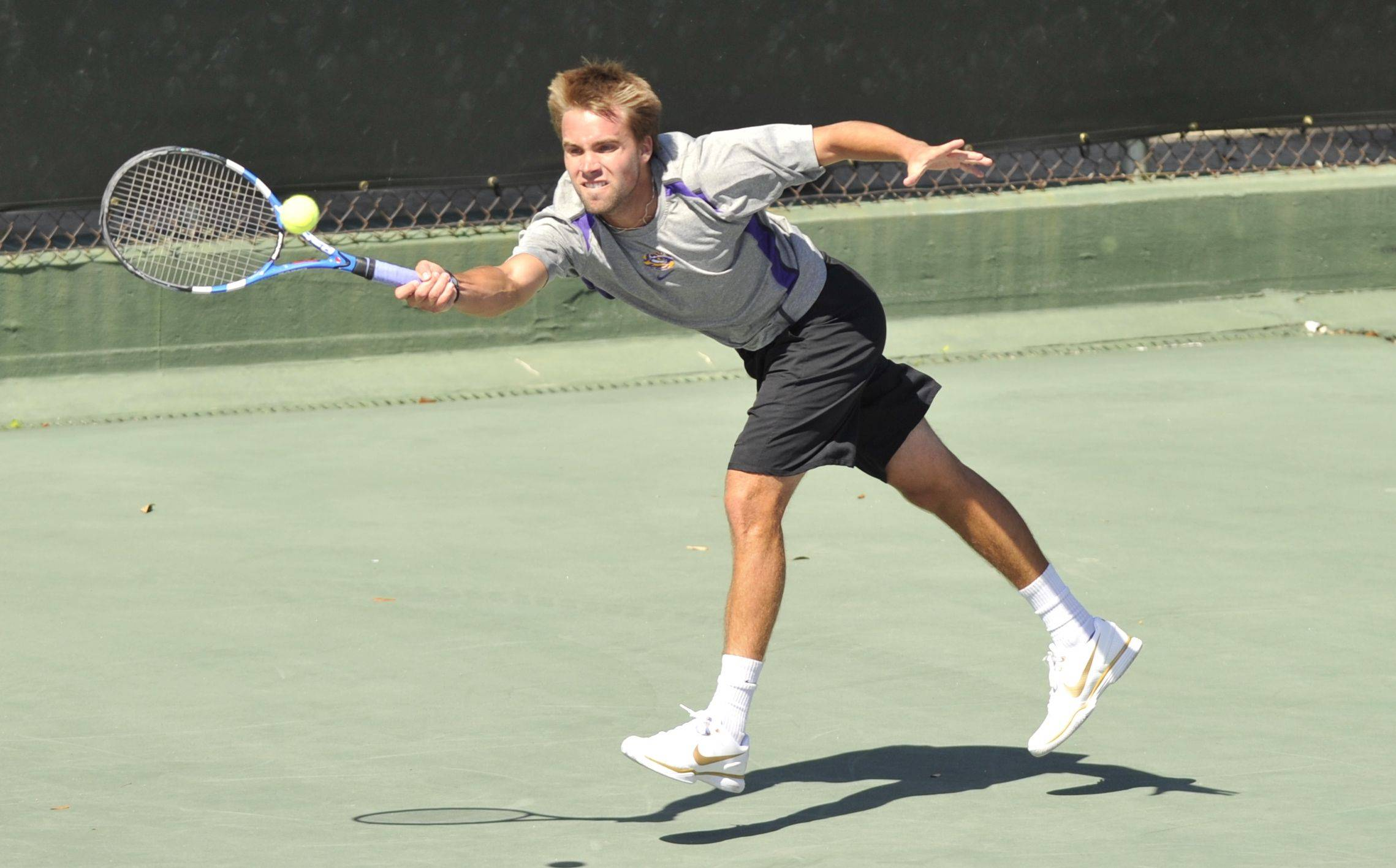 BATON ROUGE – The LSU men’s tennis team returned to its winning ways Saturday as the 33rd-ranked Tigers closed out the regular season with a 6-1 victory over Arkansas on senior day at W.T. “Dub” Robinson Stadium.

With the win the Tigers finish the regular season with a 10-12 overall record and a 5-6 mark in Southeastern Conference play, while Arkansas drops to 6-16 overall and 0-11 in conference competition with the loss.

LSU came out strong in doubles as both senior-led duos won on their respective courts. The Tiger pair of senior Julien Gauthier and sophomore Olivier Borsos were first off the courts with an 8-4 win Arkansas’ Manfred Jeske and Hall Fess on Court 3, and the 10th-ranked LSU tandem of senior Sebastian Carlsson and junior Neal Skupski sealed the early doubles point on by knocking off the Razorback duo of Chris Nott and Matt Hogan on Court 1 by an identical 8-4 score.

The match on Court 2 between LSU’s sophomore pair of Roger Anderson and Stefan Szacinski and the Hogs’ Mike Ward and Nikolas Zagaz was left unfinished with LSU leading up 6-5.

In between singles and doubles a special senior day ceremony was held for four members of the 2011 squad. Senior co-captians Carlsson and Gauthier, along with volunteer assistant Cody Loup and long-time manager Stevie Bacala, joined their families on the courts where they were presented with a framed picture and honored for their time and accomplishments with the team.

After the ceremony, the Tigers came out strong as Szacinski made quick work of Zogaj 6-2, 6-1 on Court 3 to give LSU a 2-0 advantage before both seniors ended their home careers at the “Dub” in winning fashion.

Carlsson clinched his final home victory 6-4, 6-4 on Court 5 over Ward to increase LSU’s lead to 3-0, and Gauthier captured the fourth and deciding point with a 7-5, 6-4 win over Jeske on Court 6 in his final match at the “Dub.”

With the match decided, the final three matches were played to their completion. No. 93 Skupski notched a three-set win over Hogan 6-2, 3-6, 6-3 on Court 2, and Borsos rallied from down 3-0 in the second set  and then rolled that momentum into the deciding set to capture a come-from-behind victory over 121st-ranked Nott 4-6, 7-5, 6-2 on Court 1 to make the match 6-0. The Razorbacks lone point came as Gregoire Lehmann outlasted LSU junior Mark Bowtell 7-6, 6-4 in a nearly four-hour match on Court 4 to make the final score 6-1.

“It was good to see the guys come out and play with such great energy,” LSU head coach Jeff Brown said. “They were playing hard for their senior leaders, and it gives us momentum heading into post-season play. It was also sweet justice with Sebastian clinching the doubles point and Julien clinching the final point in singles here on senior day.”

The Tigers have now beaten the Razorbacks the last five meetings between the two teams, and hold a 23-4 edge in the all-time series record.

Next up for the Tigers is the SEC Championships in Gainesville, Fla., which runs April 21-24.