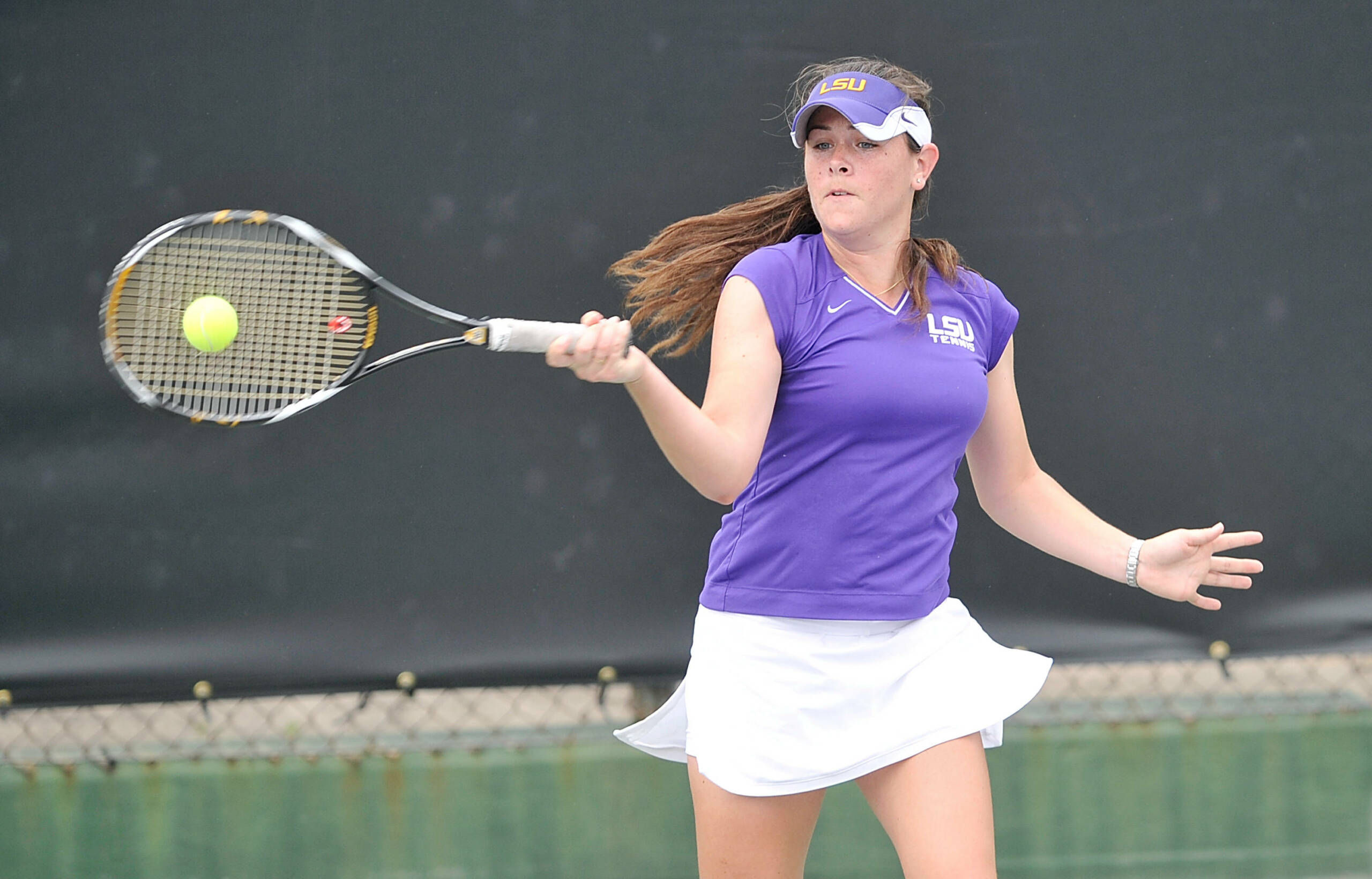 Arkansas (16-8, 6-5 SEC) captured the sixth seed and will face Auburn in the first round.

“I was proud of our effort today,” said LSU women’s tennis coach Tony Minnis. “We played extremely hard but unfortunately came up a little short. We will have to regroup and get ready for the SEC Tournament.”

The Lady Tigers were without sophomore Ebie Wilson who missed the match due to injury. Despite being shorthanded, the Lady Tigers got off to a hot start in doubles play as Keri Frankenberger and Yvette Vlaar defeated the Arkansas duo of Stephanie Roy and Kate Lukomskaya by an 8-0 margin on Court 2.

With the doubles point on the line, the Razorback tandem of Jade Frampton and Valentina Starkova built an early lead and never let LSU’s Olivia Howlett and Ariel Morton threaten, taking the match 8-4 to give the doubles point to Arkansas.

LSU’s Burns claimed the first set 6-2 in her match against Paulson. The Razorback sophomore responded, however, as she came back to take the next two sets by identical 6-1 scores to win the match 2-6, 6-1, 6-1 and give the Hogs a commanding 3-0 lead.

Morton dropped the first set 6-3 to open up her match against Carbone of Arkansas on Court 5. The LSU freshman then came back to take a 3-0 advantage in the second set. At this point in the overall match, the Lady Tigers led in the third sets of two matches and led in the second set after claiming the first set on Court 2. Unfortunately, Morton was unable to force a third set as Carbone took the final six games of the second set to pick up a 6-3, 6-3 victory and clinch the overall match for Arkansas.

The LSU freshman Vlaar split her first two sets with Frampton on Court 6. The deciding set belonged to Vlaar, as she collected a 6-4, 2-6, 6-3 win for her 10th singles victory of the spring season.

After falling to Lukomskaya 6-2 in the first set, LSU’s Frankenberger fought back to corral the second set 6-4. The Lady Tiger sophomore then built a 4-0 lead in the final set and seemed to be on her way to the win. However, Lukomskaya proceeded to capture the next four games to tie the match and eventually send it into a tiebreaker. Unfazed, Frankenberger dominated the tiebreaker 7-1 to seize the 2-6, 6-4, 7-6 (7-1) victory.

Howlett began her match against Arkansas’ Roy by winning the first set 6-4 and getting out to a 5-2 lead in the second set. The Razorback junior rebounded to eventually push the set into a tiebreaker which she won 7-4 to send the match to a deciding first-to-10-point tiebreaking set. Howlett refused to give in, though, as she won the final three points of the tiebreaker to garner a 1-0 (10-7) third-set victory and a 6-4, 6-7 (4-7), 1-0 (10-7) win and make the final overall match score 4-3.

Once the start time of the Kentucky match is announced, it will be posted on LSUsports.net as well as on the team’s Twitter and Facebook pages. Be sure to follow the team on Twitter @LSUwten and on Facebook at www.Facebook.com/LSUwten for the latest news and information.