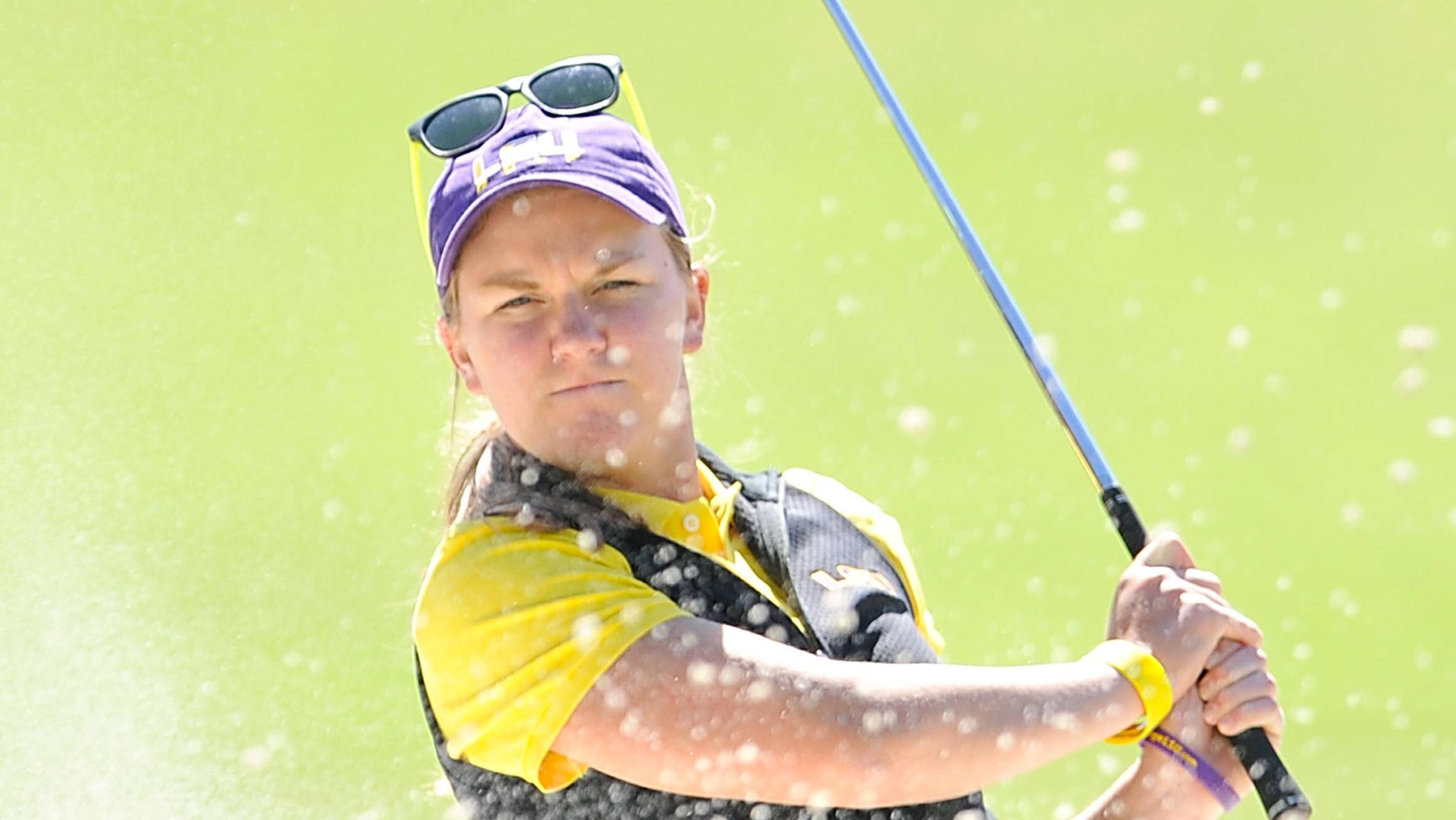 AUBURN, Ala. – Freshman Austin Ernst put together a birdie on the 15th hole and an eagle on the long par-5 16th to shoot a 1-under par round of 71 to help the eighth-ranked LSU Lady Tigers remain third after 36 holes of the 2011 Southeastern Conference Women’s Golf Championships here Saturday at the Auburn University Club at Yarbrough Farms.

That means LSU will play in the final wave of the tournament on Sunday beginning at 8:50 a.m. with leaders Auburn and Alabama.

Following the overnight storms, which delayed the start of the round by some 15 minutes to allow the maintenance crew a chance to get some of the casual water off the fairways and the bunkers, conditions were much cooler and windier. The two-club wind caused scores to soar as no team broke par and only two teams were over par in single digits. At time it seems the swirling wind was in the players face for at least one shot on every hole. The tournament scoring average was two strokes higher in the second round than Friday’s opening round.

Compounding LSU’s round was the fact that other than Ernst’s three birdies and an eagle, the Lady Tigers had just two other birdies on the round. But LSU seemingly had someone leave birdie putts hanging on the lip of just about every hole failing to drop.

LSU finished with a 12-over 300 on the par-72 layout in the play five, count four format to stand at 11-over par 587 after the second round. First-round leader Auburn, ranked 17th, shot a two-over 290 and stands at three-under par 573. Auburn is nine shots better than second place Alabama (ranked third), which moved into the top three with a three-over round of 291. The Crimson Tide is at six-over 582, five shots ahead of LSU.

After the Lady Tigers, it is another five shots back to Tennessee at 17-over 593 with Arkansas in fifth at 594.

Ernst’s 71, to go with Friday’s 73, puts her at even par 144 and moved her from 19th to a tie for fifth in the individual competition. The winner of the Central District Invitational earlier this year is four shots out of the lead held for the second straight day by Erica Popson of Tennessee. Popson, who fired a six-under 66 on Friday, posted a two-over 74 in the second round to stand at four-under 140.

“I thought it was really tough out there (Saturday) with the wind,” said LSU Coach Karen Bahnsen. “Some of the girls were fighting with the wind and second-guessing themselves during the round. It was tough. If we can see some putts drop, we can see some good things. Really, we are not playing bad golf; we just need to get some putts to drop. It’s not that they are putting badly, it’s that they are not going in.

“If we can get a couple of putts to drop (Sunday), then I think that will be good for them mentally,” she said. “We are going to go out there (Sunday) and put up a really, really good score and that’s our whole goal. We can’t care about what anyone else does; I just want for us to go out and post a good number. That’s what our goal is.”