In Focus: Carlsson Cool Under Pressure 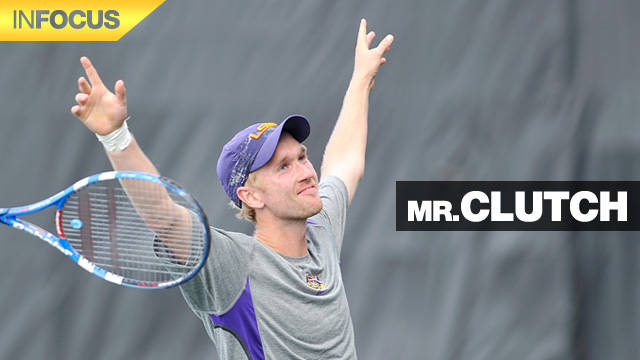 The term “clutch” is used in sports to describe an athlete who excels under pressure and executes in pivotal situations. In collegiate tennis, the opportunity to win the fourth and deciding point to clinch the match for your team is the most crucial situation of them all, and for the LSU men’s tennis team senior Sebastian Carlsson has come through in the clutch time and time again.

The Uppsala, Sweden, native has sealed the victory for the Tigers three times this season alone, and all were at home against highly-ranked opponents. But this season is nothing new, as Carlsson’s amassed 82 singles wins in his four-year career to place himself into the LSU record book and cement himself as one of the all-time Tiger greats.

His journey started more than 5,000 miles away at his home in Uppsala, where after competing in team-oriented sports he decided he wanted to try his hand at some individual sports.

“I tried a couple different ones, and my dad bought a few tennis racquets so we started playing on a court close to our house,” Carlsson said. “Then I joined a club in Sweden and I was pretty good in the beginning, so I kept going.”

Carlsson continued to improve, winning an Under 21 Swedish Junior Indoor Championship in addition to being a two-time Swedish Junior Doubles Champion. Ranked among Sweden’s Top 5 from 13 to 18 years old, he decided to attend college in the United States instead of jumping straight into the pro circuit.

“I wanted to try and get better and prolong my career, and get educated at the same time,” he said.

It was the positive recommendation from former Tigers Tom Furukrantz (1989-90) and Dan Kiernan (1999-2002) that led Carlsson to Baton Rouge, where he committed after taking an official visit.

“I thought the coaches were really nice and it seemed like a really good team atmosphere,” he said. “I like how big sports are here at the college level, it’s a fun thing that we don’t have in Sweden.”

It didn’t take long for Carlsson to make an impact as he won a team-best 27 singles matches and added18 doubles victories as a freshman in 2008, earning him numerous accolades. He nabbed First-Team All-Louisiana honors and was named Louisiana Freshman of the Year by the Louisiana Sports Writer’s Association, and he was a four-time SEC Freshman of the Week.

It was in the biggest match of the season, a senior day showdown with No. 8 Florida at home in W.T. “Dub” Robinson Stadium, that he claimed his first clinch. With the overall match tied at 3-3, Carlsson used a dominant third set to take down Florida’s Erik Corace 6-4, 2-6, 6-1 to capture the 4-3 win for his senior teammates.

Carlsson added 15 singles and 16 doubles wins his sophomore season, and had a solid post season presence by notching a pair of singles and doubles victories at the SEC Tournament and NCAA Championships, earning him Second-Team All-Louisiana honors by the LSWA.

As a junior in 2010, Carlsson stepped into a new role when he and fellow junior Cody Loup were voted co-captains of a senior-less Tiger squad. He led by example on the courts, posting a team-best 20 overall wins, and off the courts, by earning the ITA/Arthur Ashe, Jr. Sportsmanship Award for the Southern Region.

“It feels good to be a captain,” Carlsson said.  “When I was a freshman I really listened to Kevin Dessauer and what he had to say, and then James Cluskey the next year. They were people I really looked up to so I hope the younger guys feel the same way about me.”

“(Sebastian) is a great teammate to have on the team,” said LSU junior Neal Skupski. “He is the person to go to if you’re having trouble and he will give you good advice.”

Now in his senior season, Carlsson’s emerged as an unquestioned leader as he was named a team captain for the second year in a row and stepped up his game to an even higher level. In doubles, he and Skupski are one of the top duos in the nation. The tandem are currently ranked 10th in the nation, and have 25 wins under their belt so far this season. In dual competition, Carlsson and Skupski are 15-5 on Court 1, with wins over the former No. 1 and No. 5 doubles pairs in the nation.

“I’m lucky to have him as a partner,” Skupski said. “We gel really well because he’s the cool one on the team who’s always solid and I am the one taking more chances. Hopefully we can finish the season as All-Americans.”

In singles, Carlsson’s come through in the clutch in three of the Tigers biggest wins of the season. In LSU’s home-opener against No. 29 Rice, Carlsson knocked off Sam Garford-Bles 6-4, 4-6, 6-0 to pick up the fourth and deciding point and seal LSU’s first win of the season. A few weeks later in the first SEC home-match of the season he downed Ole Miss’ Chris Thiemann 6-4, 7-5 to once again seal the fourth and deciding point of the match as the Tigers upset the 22nd-ranked Rebels, 4-2, for the first win over Ole Miss since 2006.

“I have a lot of friends there and they kept bugging me for not beating them, so that was great to finally beat them,” he said.

It was in the Tigers’ non-conference match against No. 16 Michigan that Carlsson’s toughness showed more than ever. Carlsson was injured toward the end of his doubles match, and it was unclear if he was even going to be able to compete in singles. But he gutted it out and took the courts, where he not only played but he once again proved to be clutch as he won a second-set tiebreak over the Wolverines’ Barrett Franks to take the match 6-4, 7-6 (5) and clinch the victory for the Tigers. It was the second-highest ranked win for LSU since the 2008 victory over No. 8 Florida, which Carlsson also clinched.

“He’s been extremely clutch over his career,” LSU head coach Jeff Brown said. “That’s a word that gets thrown around a lot, but his style of play puts him in some long matches so he is often one of the last matches on. He handles that pressure really well and uses his confidence and ability to overcome his nerves, so it’s a good combination.”

“It’s important to try and not look at the other courts and just focus on every point and not what the overall score is,” Carlsson said. “It’s pretty hard, but I try to just be calm and make smart decisions.”

A singles win against Auburn’s Daniel Cochrane was the 82nd career win for Carlsson, which put him in sole possession of 19th place on LSU’s all-times wins list.

“It’s great to be a part of the Top 20 winners,” he said. “It’s great for the team to win a lot of matches and I’m just happy to contribute to LSU and the team.”

Off the courts, Carlsson uses the same discipline, determination and drive in the classroom. He’s been named an ITA Scholar-Athlete every year at LSU and to the SEC Academic Honor Roll in 2009 and 2010. Carlsson is set to graduate in December with a degree in Biology.

“He’s a great example of a student-athlete,” Brown said. “Majoring in a high degree and to continue to perform at such a high level for his team is a rare combination. Usually if someone is that good at one or the other one is compromised, but he’s been able to maintain his academics and tennis at a very high level.”

Carlsson will take the courts in front of a home crowd at the “Dub” for the final time on Saturday when the Tigers face Arkansas at 1 p.m., and it wouldn’t be a surprise to anyone in the stands if he were to get the opportunity to clinch a victory one last time.

“I’m going to be excited to play,” he said. “My parents and sister will be here so I will be excited, but it will also be sad at the same time. When I think back to my freshman season it feels like forever ago, but at the same time it’s gone by so fast.”