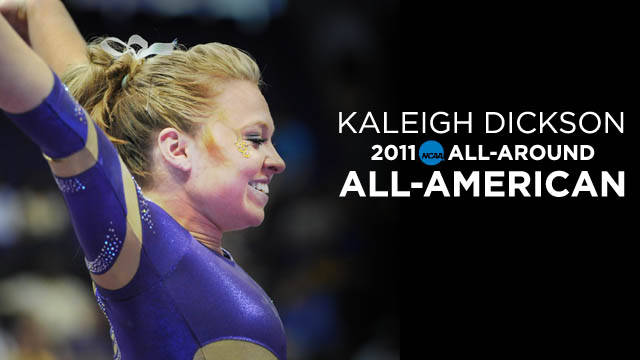 Exactly one year ago Dickson had a cast on her right leg as she recovered from a knee fracture, and a year later she earned LSU’s 106th All-America honor to push the streak to 19 consecutive years with at least one All-American for the Tigers.

Dickson also became LSU’s 10th All-American in the all-around dating back to 1986.

“I am as proud of her for the accomplishment and type of competition she put together as I have been for any athlete we have had,” LSU head coach D-D Breaux said. “The fact she came back from a serious injury, stayed in the process the whole time and never wavered is amazing. She was a leader for us all season long, and I couldn’t be more proud.”

Dickson followed 11th-seeded Illinois throughout the semifinal, performing each routine after all six Fighting Illini finished.

The Oldsmar, Fla., native opened the meet with a 9.775 on bars, and Dickson kept the momentum going through the entire meet.

She scored a 9.75 on beam with a solid routine, and she ended the meet with a bang by earning a 9.80 on floor and a career-high tying 9.85 on vault. She missed All-America honors on vault by the slimmest of margins as she was only .025 out of a tie for seventh place.

“I just wanted to go in and have fun because I had nothing to lose,” Dickson said. “I was calm and confident, and I have been working really hard the past two weeks.

“Becoming an All-American is the cherry on top of everything. I am so excited. It couldn’t have ended in a better way.”

With the completion of the 2011 season that saw seven new faces compete at the collegiate level for the first time, Breaux and the Tigers can turn their focus and attention to the 2012 season.

“We are excited as a team to get back in the gym and fuel the fire for next year,” Breaux said. “We have a great group coming back and an outstanding crop of freshmen coming in, so our future is bright.”