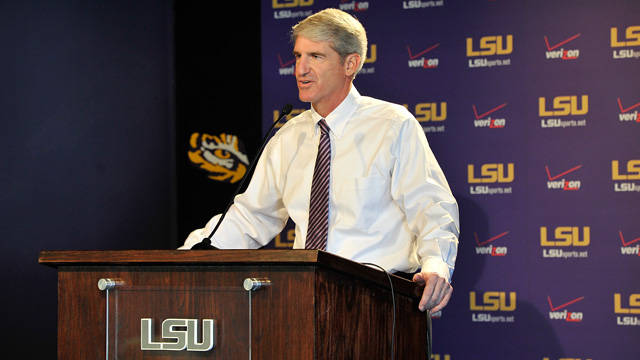 BATON ROUGE – The LSU Board of Supervisors voted on Friday to extend the contract of Vice Chancellor and Director of Athletics Joe Alleva for three more years to June 30, 2016.

“Joe Alleva has performed effectively in his role over the last two and a half years and extending his agreement will ensure continued, stable and engaged leadership in the Athletic Department,” said LSU Chancellor Michael Martin who recommended the extension to the Board.  “Under his leadership LSU continues to enjoy one of the most prolific and high-achieving athletics programs in America.”

Alleva became Director of Athletics in July of 2008 and he added the title of Vice Chancellor in August of 2009.  His contract was originally set to expire in June of 2013.

“I want to thank Chancellor Martin, President Lombardi and the LSU Board of Supervisors for having the confidence in me to lead the LSU Athletics program,” Alleva said.  “LSU is a special place and I thank our great fans for their support and passion.  Our goals continue to be to win championships, prepare our student-athletes for the rest of their lives and provide a formula for the future of LSU Athletics.  I truly look forward to the years ahead.”

Under Alleva’s leadership LSU continues to have one of the few athletics programs in the country that uses no state tax dollars and no student fees, and in fact transfers money back to the University each year.

During the 2009-10 athletic year, 17 of LSU’s 20 sports programs participated in NCAA post-season competition and seven of the 10 sports that have concluded their schedules in 2010-11 have reached NCAA post-season play.  Six LSU teams posted Top 10 national finishes last season and 12 were ranked in the Top 25.

Alleva was recently named to the prestigious NCAA Division I Men’s Basketball Committee for a five-year term that begins this fall.