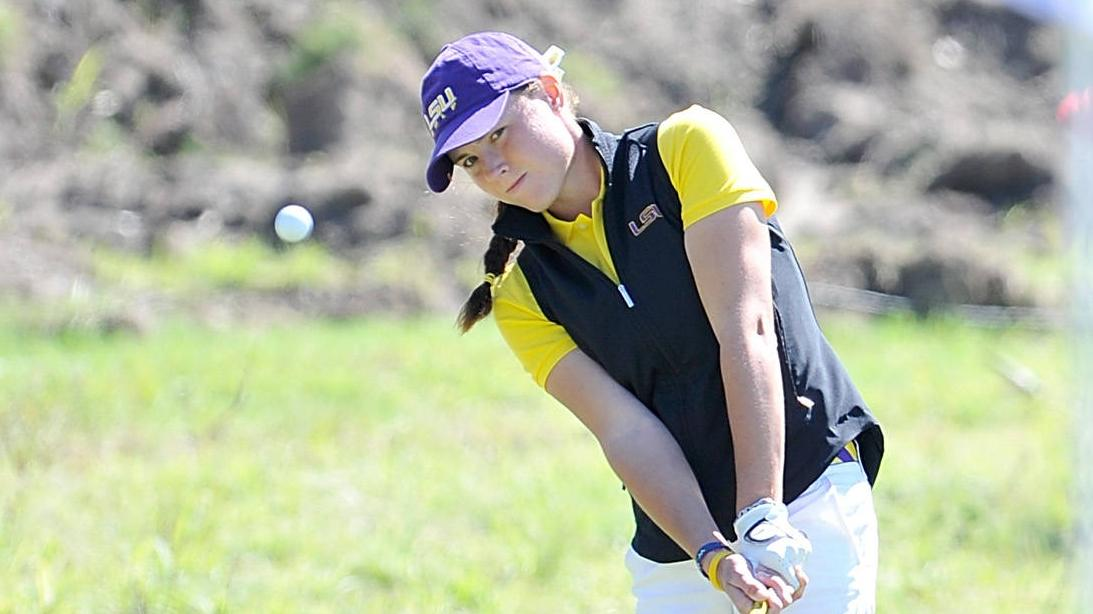 AUBURN, Ala. – A strong “team” day for the eighth-ranked LSU Lady Tigers put them in third place after the first round of the 2011 Southeastern Conference Women’s Golf Championships Friday at the Auburn University Club at Yarbrough Farms.

The Lady Tigers posted a one-under par round of 287, its best opening round in the SECs since shooting an identical round in the first round of the 2001 SEC Championship in Athens, Ga.

Auburn, on its home course, is the first round leader as the 17th-ranked Auburn Tiger team shot five-under par 283, while 14th-ranked Tennessee is second at three-under 285. The Tennessee round was propelled primarily by the six-under 66 round of 22nd-ranked Ericka Popson.

LSU is alone in third, two shots clear of No. 12 Arkansas with No. 3 Alabama at three-over 291 and No. 11 Georgia at four-over 292. LSU played with Georgia and Alabama in the first round on Friday.

The Lady Tigers were led by junior Tessa Teachman who responded strongly with a two-under par round of 70, while Megan McChrystal and Jacqueline Hedwall finished at even par 70. Austin Ernst rounded out the counting scores at one-over 73 and Amalie Valle posted 75.

It was the solid contributions from all part of the LSU lineup that had LSU Coach Karen Bahnsen happy.

“They fought for everything,” said Bahnsen. “They stayed strong mentally and that’s what they need to keep doing. I think they are in a good place mentally and we are just going to keep trying to move forward. We need to stay relaxed, not get result oriented and just keep playing. We want to keep it fun. But we were very solid from top to bottom and that means a lot.

The focus was something Bahnsen saw in the Thursday practice round.

“I did. I just think they are in the right place mentally,” Bahnsen said. “We’re not going to get ahead of ourselves, but they are getting their confidence back.”

LSU started on the more difficult front side of the course and turned at five over par before the Lady Tigers kicked things into gear. The Lady Tigers were three-under par on the par-5 12th hole, including an equal from Hedwall and two-under on the par-5 16th hole. Teachman had a three-birdie nine of 33 and McChrystal was two-under par 34 over the last nine holes.

“I think the front starts off really hard,” said Bahnsen. “So I think they held it. They didn’t get frustrated which is very important not to do. They got hot and made a few birdies where they could.”

Teachman, ranked 97th in the Golfstat Cup, stands in a group tied for fourth, four shots out of the lead of Popson, who had six birdies and no bogeys for the Lady Vols to grab a three-shot lead over two golfers – Cydney Clanton (Auburn) and Emily Tubert (Arkansas) – at 69.

Hedwall, ranked 79th, and McChrystal, ranked fourth in the nation, are in a group tied for 14th after the first round. Ernst, ranked 60th, is tied for 19th in the individual competition, seven shots from the lead.

The round was played in windy conditions, but the storms expected for late in the afternoon held off and were expected to clear out prior to the start of Saturday’s round.

The Lady Tigers will be paired with Auburn and Tennessee in the final wave of the second day beginning off hole No. 1 at 9:20 a.m. Live scoring will be available through LSUsport.net and Golfstat.com. Follow LSU women’s golf on Facebook at www.Facebook.com/LSUwomensgolf and on Twitter @LSUwomensgolf.