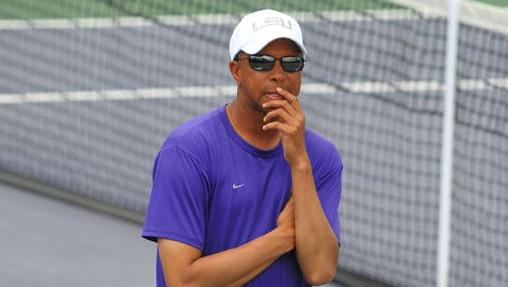 BATON ROUGE – The LSU women’s tennis team will wrap up regular-season play when it heads to Fayetteville to meet No. 19 Arkansas on Saturday at noon CDT.

The Lady Tigers (11-11, 5-5 SEC) and Razorbacks (15-8, 5-5 SEC) are currently tied for second place in the SEC Western Division. The winner of Saturday’s match will earn the No. 6 seed and meet Auburn in the first round of the 2011 SEC Women’s Tennis Tournament which begins on Thursday in Knoxville. The loser will be the No. 7 seed and face Kentucky in the first round.

The two squads meet after splitting their respective homestands with No. 18 Vanderbilt and Kentucky last weekend. LSU fell to Vanderbilt 7-0 before beating Kentucky 5-2 while Arkansas knocked off Kentucky 6-1 and then lost to Vanderbilt 4-3.

“We need to come out relaxed, loose and ready to play,” said LSU women’s tennis coach Tony Minnis. “We have lots to play for and Arkansas is a very good team, so we need to be ready for a challenge.”

The Razorbacks are fueled at the No. 1 post by Anouk Tigu. The senior is 12-6 on the spring season in singles competition after posting a 10-3 record during the fall. Ranked No. 24 nationally, she is coming off a 7-5, 6-3 defeat of Vanderbilt’s Alex Leatu last Sunday.

Stephanie Roy leads Arkansas with 16 spring singles victories and is tied for the team lead with six conference wins. Playing at the No. 2-5 slots, the Montreal, Quebec, native has collected two victories against nationally-ranked opponents and has won three of four matches entering Saturday’s contest.

Tigu pairs with sophomore Claudine Paulson to lead the Razorbacks in doubles play. The tandem has notched a 16-6 spring record including a 7-3 conference clip and currently holds six victories over ranked competitors.

Sophomore Ebie Wilson guides LSU’s play on the singles courts. Despite retiring in the second set of her match against Kentucky’s Caitlin McGraw on Sunday, the former St. Paul’s Episcopal (Ala.) star has tallied a team-best 12 victories this spring.

Fellow sophomore Kaitlin Burns is tied for second on the squad with nine wins during the spring season. She is coming off a thrilling three-set victory over Wildcat freshman Khristina Blajkevitch in her last outing.

LSU’s new Court 2 combo of junior Olivia Howlett and freshman Ariel Morton help direct the Lady Tigers in doubles action. The twosome is 2-0 since being paired together prior to last weekend, compiling wins over Keilly Ulery and Chelsea Preeg of Vanderbilt and the Wildcat duo of Jessica Stiles and CeCe Witten.

Live stats will be provided for Saturday’s contest and can be followed at www.LSUsports.net/livestats.

Following play in Fayetteville, the Lady Tigers will travel to Knoxville for the 2011 SEC Women’s Tennis Tournament which begins Thursday, April 21.