In Focus: A Leader On and Off the Court 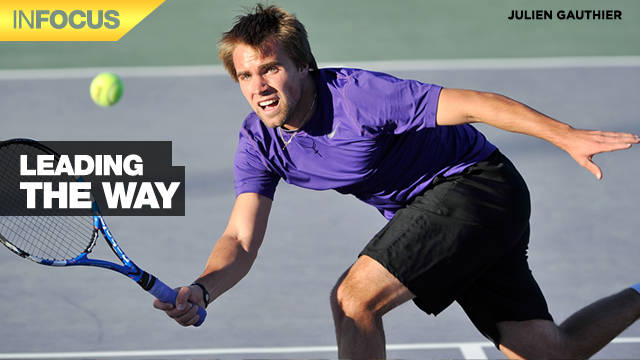 When student-athletes arrive on campus their freshman year, the transition to college life both academically and athletically can be a big adjustment. As a freshman in 2008, LSU men’s tennis player Julien Gauthier didn’t have the luxury of easing his way into the tennis lineup. He was needed by his team to compete at a high level for a Top-20 LSU team with NCAA tournament aspirations.

But the Repentigny, Canada, native didn’t shy away from the challenge, earning 17 singles victories to go along with12 doubles wins, playing primarily on Court 3 in dual competition. Gauthier also proved vital in post season play, notching singles wins against No. 8 Tennessee in the second round of the Southeastern Conference Championships and against Drake in the first round of the NCAA tournament.

“I started playing really high in the lineup, so I had to step up my game right away,” Gauthier said. “It was a very high level and I was surprised at how competitive and intense it was every single match.”

Gauthier first picked up a racket when he was seven years old, and he quickly excelled at the game. He won a remarkable 13 national and provincial titles in Canada, and was named the 2005 Junior Tennis Player of the Year in Quebec. After high school, Gauthier’s former club tennis coach advised him that college tennis in the United States was a good option to continue to play and hone his skills.

“I sent a few resumes to schools that I thought would be a good fit for me, and LSU was one of the first to reply,” Gauthier said. “It was the first place I came on a recruiting trip and right away I loved the coaches, the campus and the weather.”

So Gauthier made the nearly 1,700 mile trek to Baton Rouge. When he arrived on campus he roomed with former Tigers Michael Venus and James Cluskey, along with fellow incoming freshman Sebastian Carlsson. Gauthier said Venus and Cluskey provided valuable knowledge to help make the transition to college tennis easier.

“They had a big influence and helped me and Sebastian understand the college life and what practice and the season would be like,” he said.

As a sophomore Gauthier added 30 more wins, 17 in doubles and 13 in singles, and made his first appearance in the Intercollegiate Tennis Association rankings when he and Cluskey checked in at No. 53 in the doubles poll. The Tiger tandem pulled down their highest ranked win as they took down Arkansas’ 14th-ranked duo of Blake Strode and Matt Hogan, 8-6. In singles, Gauthier notched a ranked victory when he upset 90th-ranked John Peers of Middle Tennessee State 6-4, 4-6, 6-3.

With the departure of Cluskey and Venus in 2009, Gauthier moved into a leadership role of his own as he and fellow juniors Carlsson and Cody Loup were the oldest members of senior-less Tiger squad. Gauthier continued to lead by example on the courts as he notched 13 more singles wins and added 11 in doubles, and was tied for the highest conference winning percentage on the team.

One of the best examples of his fight was in the second-to-last match of the season against South Florida, a match LSU had to win to keep its NCAA hopes alive. With the overall score tied at 3-3, Gauthier clinched the match for the Tigers in come-from-behind fashion by grinding out a 6-7 (2), 7-5, 7-5 win on Court 4.

“He’s had some really clutch matches, and he came up so big for us in that one,” Brown said. “He came back from a big deficit to clinch it with so much pressure involved. He’s had so many big wins, and he’s just solid all-around and you never have to worry about him.”

Now a senior, he and Carlsson were voted co-captains by their teammates before the start of the season, an honor Gauthier said he was happy to take on.

“When the younger guys on the team need something they know they can count on us to be there for them if they have questions or anything,” Gauthier said. “It’s great to be a leader that your teammates can count on.”

“Julien is a great guy off the courts and he continually leads by example on the courts,” LSU sophomore Stefan Szacinski said. “He’s a good guy to be around and he is always supportive of everyone on the team.”

So far this season Gauthier has stepped up his game even more by winning a team-best 12 dual victories, including a team-leading seven SEC wins.

“If you look at all of our big wins this season, Julien has had a win in all of them,” Brown said. “He’s been more of a vocal leader this year and understands what we needed out of him.”

One of the biggest wins this season was a 4-2 victory over then-22nd-ranked Ole Miss at home in W.T. “Dub” Robinson Stadium, a win Gauthier said is one of the highlights of his career.

“We hadn’t won against them my first three years here, so it felt really good to finally beat them,” he said.

Gauthier also leads by example off the courts, being named to the SEC Academic Honor Roll in 2009 and 2010 for his dedication to his academic studies, and e’s set to graduate in December with a degree in Business Management.

“I’ll be here next fall and then I’m going to start looking for potential work that will interest me, but I think I want to stay in the sports industry,” Gauthier said.

Gauthier will play his final home match at the “Dub” on Saturday at 1 p.m. against Arkansas, and he and Carlsson will be honored during the match as part of the senior day ceremonies. Gauthier’s parents will be in town for the match, a moment he said is going to be a bitter-sweet.

“I’m going to be very happy of what I’ve accomplished over the last four years, but it will definitely be mixed emotions,” Gauthier said.

As his stellar 60-plus win career comes to a close, Gauthier said he will miss competing and the camaraderie of the team after he takes the courts for the final time.

“I will actually miss practicing and everything, even though it’s been hard at times,” he said. “It’s been very demanding but very fun at the same time, and overall it’s definitely been a great experience.”