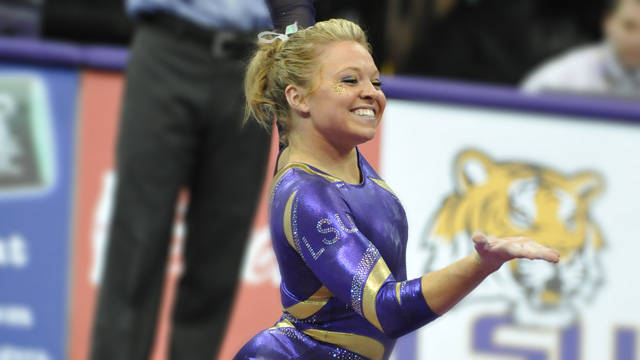 CLEVELAND – LSU gymnast Kaleigh Dickson will represent the Tigers by competing in the all-around during Semifinal 1 at the NCAA Championships in the Wolstein Center Friday.

The meet begins at 11 a.m. CT, and live video and stats links can be found at www.LSUsports.net. Live score updates will be available at www.Facebook.com/lsugym and www.Twitter.com/lsugym.

Dickson will rotate with 11th-seeded Illinois and will open the meet on the bye before bars. Dickson’s rotation will be bye, bars, beam, bye, floor and vault.

“I expect the same thing I have expected of Kaleigh all season long and that’s consistency,” head coach D-D Breaux said. “In these last two weeks of preparation for the NCAA Championships she has been a pleasure to coach because she has worked hard and her teammates have been supportive.”

A redshirt freshman, Dickson advanced to the NCAA Championships by finishing as the top all-arounder not on an advancing team at the NCAA Athens Regional on April 2. She posted a 39.075 all-around mark in the regional, including a 9.825 on floor.

LSU has a streak of 18 straight years with at least one All-American dating back to 1993, and Dickson will try to push that streak to 19 Friday. If she finishes in first through fourth place on any of the four events in the semifinal, she will earn First-Team All-America honors and compete in the NCAA Individual Event Finals on Sunday. If she finishes in fifth through eighth place, she will earn Second-Team All-America recognition, but she will not advance to the event finals.

Dickson competed in the all-around in all but the first meet of the season, and she was one of LSU’s most consistent performers this season with only six falls in 47 total routines.

Dickson led the team in the all-around on four occasions this season, including the last three meets of the year at Alabama, at the SEC Championship and the NCAA regional.