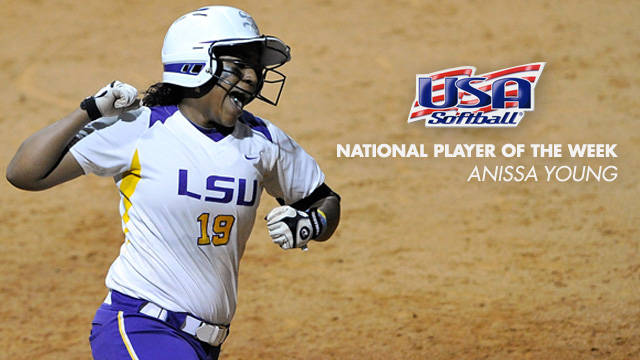 OKLAHOMA CITY, Okla. – The awards continue to pour in for LSU first baseman Anissa Young, who added USA Softball Collegiate Player of the Week to her list of accolades Tuesday as announced by the Amateur Softball Association [ASA] of America.

Young’s performance lifted the Tigers from unranked to the No. 19 position in the ESPN.com/USA Softball Collegiate Top 25 poll, also released today by ASA. She is the fourth player in program history to earn this prestigious honor and joins the elite company of former All-Americans Kristin Schmidt [March 4, 2004], Emily Turner [April 18, 2006 & May 1, 2007] and Kirsten Shortridge [March 26, 2010].

LSU recorded a three-game sweep of Alabama over the weekend, a team that had been ranked No. 1 since March 22. The sweep for the Tigers also was their first of the Crimson Tide dating back to the 2004 season.

Young had a weekend to remember ignited by a solo home run during the 14th inning to end the longest game in program history. Not only did the walkoff shot claim the series opener 2-1, but it made Young the 29th player in program history to collect 100 career hits.

“This is certainly a fabulous and well-deserved honor for Anissa and our program,” head coach Yvette Girouard said. “Our games with Alabama are always a battle to the end, and I give her all the credit for making the necessary adjustments during both at-bats to win those games. What she was able to do provided memories for a lifetime not only for herself, but her teammates as well.”

Her encore performance during the second game of the series was just as dramatic. Young belted a two-run shot in the 10th inning off three-time All-American and reigning SEC Pitcher of the Year Kelsi Dunne to extend her hitting streak to a career-long eight games.

“I’m extremely happy, humbled and honored to win an award like this. I couldn’t have done it without the support of my teammates, and the atmosphere provided by the Tiger fans,” Young said. “The Alabama series is something I’ll never forget for those reasons. Both times at the plate I was just trying to get on-base because our team needed base runners. It was an unbelievable feeling to run around the bases and was very emotional to meet my teammates at home plate.”

LSU steps out of SEC action Wednesday at McNeese State. First pitch is slated for 6 p.m. in Lake Charles. Live stats are available in the Geaux Zone on LSUsports.net along with in-game updates provided via the program’s social media pages at www.Facebook.com/lsusoftball and www.Twitter.com/LSU_Softball.