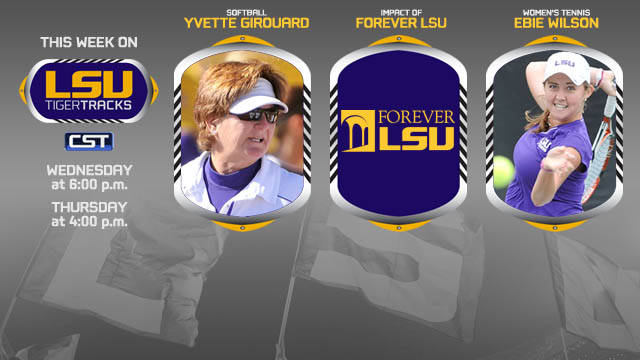 BATON ROUGE – This week’s installment of LSU Tiger Tracks, a program highlighting various aspects of the university and its athletic department, can be seen at 6 p.m. Wednesday and 4 p.m. Thursday on Cox Sports Television.

LSU Tiger Tracks opens this week with a visit from softball coach Yvette Girouard, who talks about the Tigers’ amazing sweep of top-ranked Alabama and previews this weekend’s home series versus Tennessee.

The show continues with a profile by correspondent Garrett Walvoord on LSU women’s tennis player Ebie Wilson, who has developed into one of the top performers on the young and talented Lady Tiger squad.

The show concludes with a look at the impact the Forever LSU fundraising campaign has made upon the university, including its effect on the athletic department.