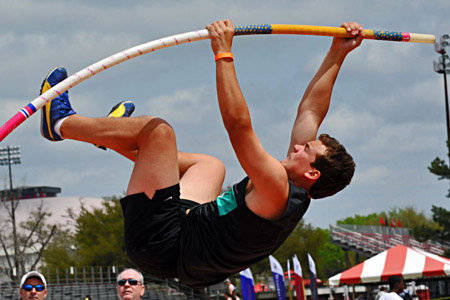 BATON ROUGE – After signing with the LSU men’s track and field program in February as one of the premier pole vault recruits in the country, Lafayette High School senior Andreas Duplantis cleared the 17-foot mark for the first time (watch the video) en route to a runner-up finish at the Texas Relays this past weekend.

Duplantis sailed over the bar at 17-2 on Friday afternoon to finish in second place overall in the boys pole vault “A” section at the 84th Clyde Littlefield Texas Relays held at Mike A. Myers Stadium in Austin.

Despite matching event champion Reese Watson of Texas’ Spring High School with an equal clearance at 17-2, Duplantis finished in second place due to total misses in the competition.

After entering the meet as the nation’s No. 4-ranked performer in the boys high school pole vault with his previous personal best of 16-10 set at the Lafayette Oil City Relays on March 18, Duplantis vaulted into a tie for the No. 2 national ranking for the 2011 outdoor campaign along with Watson and Nikita Kirillov of St. Pius X High School in Atlanta, Ga. The nation’s leading mark in the boy’s high school pole vault is on 17-6 ½ by Andrew Irwin of Mount Ida High School in Mount Ida, Ark.

Duplantis comes from an impressive pedigree of pole vaulters as his father, Greg Duplantis, competed for the Tigers during his collegiate career while posting a best of 18-5 ¼ during his senior season in 1986. He went on to a successful professional career in which he set a lifetime best of 19-0 ¼ in 1993.

Duplantis was not the only LSU men’s track and field recruit to shine over the weekend as sprint prospect Aaron Ernest of Homewood High School in Homewood, Ala., enjoyed another successful weekend with a trip to Birmingham, Ala., to compete in the Spain Park Classic.

Ernest set three meet records on Saturday with wins in the 100-meter dash, 200-meter dash and long jump as he currently ranks among the national leaders in each event for the 2011 outdoor season.

In winning the Spain Park Classic 100-meter dash championship, Ernest set a new wind-legal PR with his run of 10.41 seconds to finish nearly one second ahead of his nearest competitor. Saturday’s time dropped his wind-legal best from 10.48 set in the Alabama Class 6A, Section 3 Championships a season ago.

Just one week prior to Saturday’s performance, Ernest emerged as arguably the top sprint prospect for this season at the high school level by running a wind-aided time of 10.17 (+2.4) and a wind-legal best time of 20.86 (+0.2) to sweep sprint titles at the Mobile Challenge of Champions on April 2. He currently ranks at No. 1 in the 100 meters and No. 2 in the 200 meters under all conditions nationwide this season.

The future of the LSU women’s track and field program was also on display at the Arcadia Invitational on Friday and Saturday as St. Louis native Samantha Levin claimed her bronze medal in the girls invitational 800-meter run in the meet held at Arcadia High School in Arcadia, Calif.

While competing in just her second meet of the 2011 outdoor season for St. Louis’ Ladue Horton Watkins High School, Levin nearly set a new personal best with a time of 2 minutes, 9.48 seconds to finish third in the 800-meter run with the No. 3-ranked performance in the country this season.

Levin competed in a race that featured the three fastest times in the country this season as she took third at the meet, behind No. 1-ranked Savannah Camacho (2:08.30) of Templeton High School and No. 2-ranked Dynasty Gammage (2:08.72) of Long Beach Poly High School in California.

Levin set her lifetime PR of 2:09.27 in the 800-meter run in winning a gold medal in the event at the 2010 USATF Youth Outdoor Championships during the summer of her junior season.