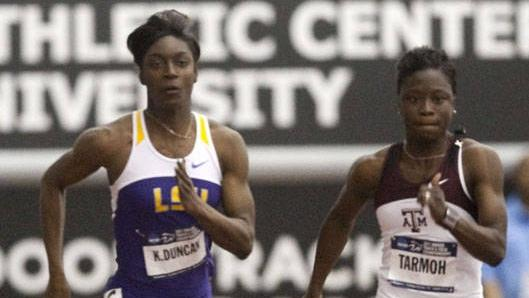 The Bowerman Award is collegiate track and field’s equivalent to the Heisman Trophy, and is awarded to the top male and female athlete in the country each season.

This marks the fourth time this season that the committee has published this watch list, which includes the 10 men and 10 women under consideration for the award to be presented following the outdoor season.

Henning, who was a semifinalist for the Bowerman Award a year ago, has proven to be the NCAA’s most dominant thrower over the past two seasons as he recently defended his NCAA crown in the weight throw to cap an undefeated 2011 indoor season. Henning wrapped up the campaign as the NCAA leader again in the event after posting a seasonal best of 76 feet, 6 ¼ inches during the regular season.

Henning recently saw an eye-popping streak of 18-straight wins against collegiate competition come to an end at the Texas Relays this past weekend with his fifth-place finish in the hammer throw.

Before Saturday’s competition, Henning had captured 18-straight event crowns against his peers dating to the start of the 2010 indoor season, which included 11-straight wins in the weight throw indoors and seven-straight wins in the hammer throw outdoors. Henning has already defended his NCAA crown in the weight throw, and has his sights set on defending his national title in the hammer throw outdoors in 2011.

On the strength of her performance in winning her first career national title in the 200-meter dash with the NCAA Indoor Championships on March 11, Duncan has emerged as one of the dominant sprinters during her young career as she has joined the women’s watch list for The Bowerman for the first time.

After winning her first career Southeastern Conference title at the SEC Indoor Championships with a new indoor personal record of 22.78 seconds, Duncan became the first Lady Tiger since Muna Lee in 2004 for her performance to win the NCAA Indoor crown in the 200-meter dash with her winning time of 22.85.

In fact, her indoor PR of 22.78 is the world’s fastest indoor 200-meter time in three years since Texas star Bianca Knight set the American indoor record of 22.40 at the 2008 NCAA Indoor Championships.