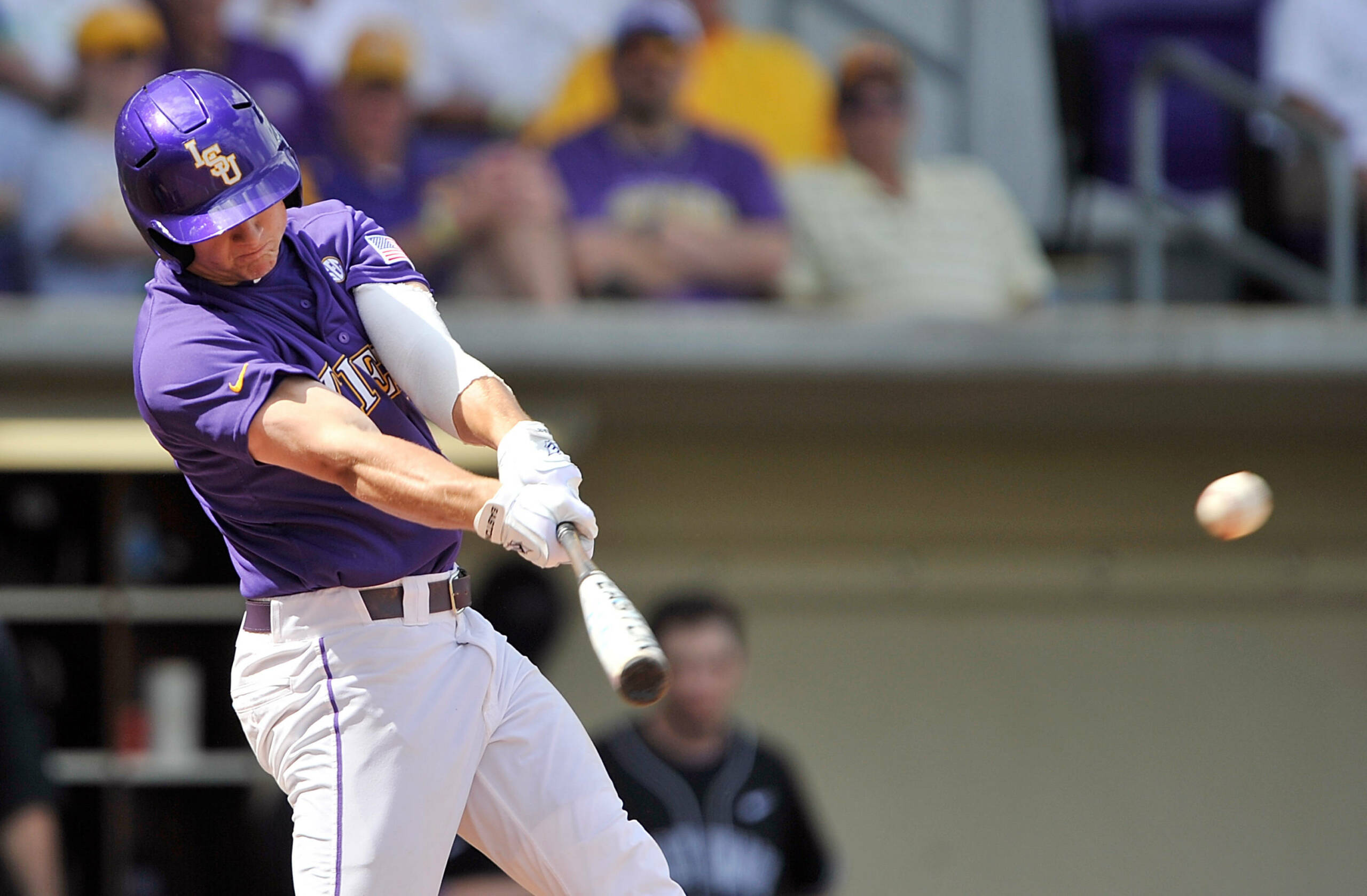 FAYETTEVILLE,  Ark. – Arkansas catcher James McCann launched a three-run, walk-off homer in the bottom of the ninth inning Saturday night to give the 18th-ranked Razorbacks a 4-3 win over No. 15 LSU at Baum Stadium.

Arkansas, which posted a 2-0 victory over the Tigers Friday night, has won the first two games of the three-game SEC series. The Hogs improved to 22-8 overall, 5-6 in conference play. LSU is 21-10 and 3-8.

The teams conclude the series at 1 p.m. CT Sunday. The game will be televised on Cox Sports Television, and it can be heard on affiliates of the LSU Sports Radio Network. Live stats and audio are available at www.LSUsports.net.

Arkansas trailed 3-0 heading into the bottom of the ninth inning, but the Razorbacks staged a rally against LSU reliever Kevin Berry (2-1). Centerfielder Collin Kuhn was hit by a pitch to lead off the inning, and after stealing second base, he scored on a single by designated hitter Sam Bates.

Berry retired rightfielder Kyle Robinson on a fly ball before pinch runner Trent Atkins stole second base and moved to third on a single by first baseman Dominic Ficociello.

McCann then unloaded a Berry pitch over the left-field bleachers to lift Arkansas to victory. The blast was McCann’s fifth homer of the season.

Berry was charged with four runs on three hits in 0.1 inning.

The loss overshadowed a brilliant pitching effort by LSU starter Kevin Gausman, who fired eight shutout innings and limited Arkansas to five hits with one walk and five strikeouts.

“This is obviously a heartbreaking loss,” said LSU coach Paul Mainieri. “Kevin Gausman was outstanding on the mound, and I was so proud of the way he pitched after a couple of rough outings in the past two weeks. Our players competed extremely hard the entire game, and it looked like we were in position to get a win. I’m confident we’ll recover from this and come back ready to play tomorrow.”

LSU broke a scoreless tie with three runs in the top of the ninth. With one out, centerfielder Mikie Mahtook reached on an error, and shortstop Austin Nola followed with a single against Arkansas reliever Trent Daniel.

Razorback closer Nolan Sanburn was inserted into the game to face LSU rightfielder Mason Katz, who ripped a two-run triple into right-center field to give the Tigers a 2-0 lead.

The lead was extended to 3-0 when second baseman JaCoby Jones laid down a sacrifice bunt, scoring Katz from third.

Sanburn (2-1) was credited with the win after being charged with one run in 0.2 inning.