by Will Stafford (@WillStaffordLSU)
Complete Results +0 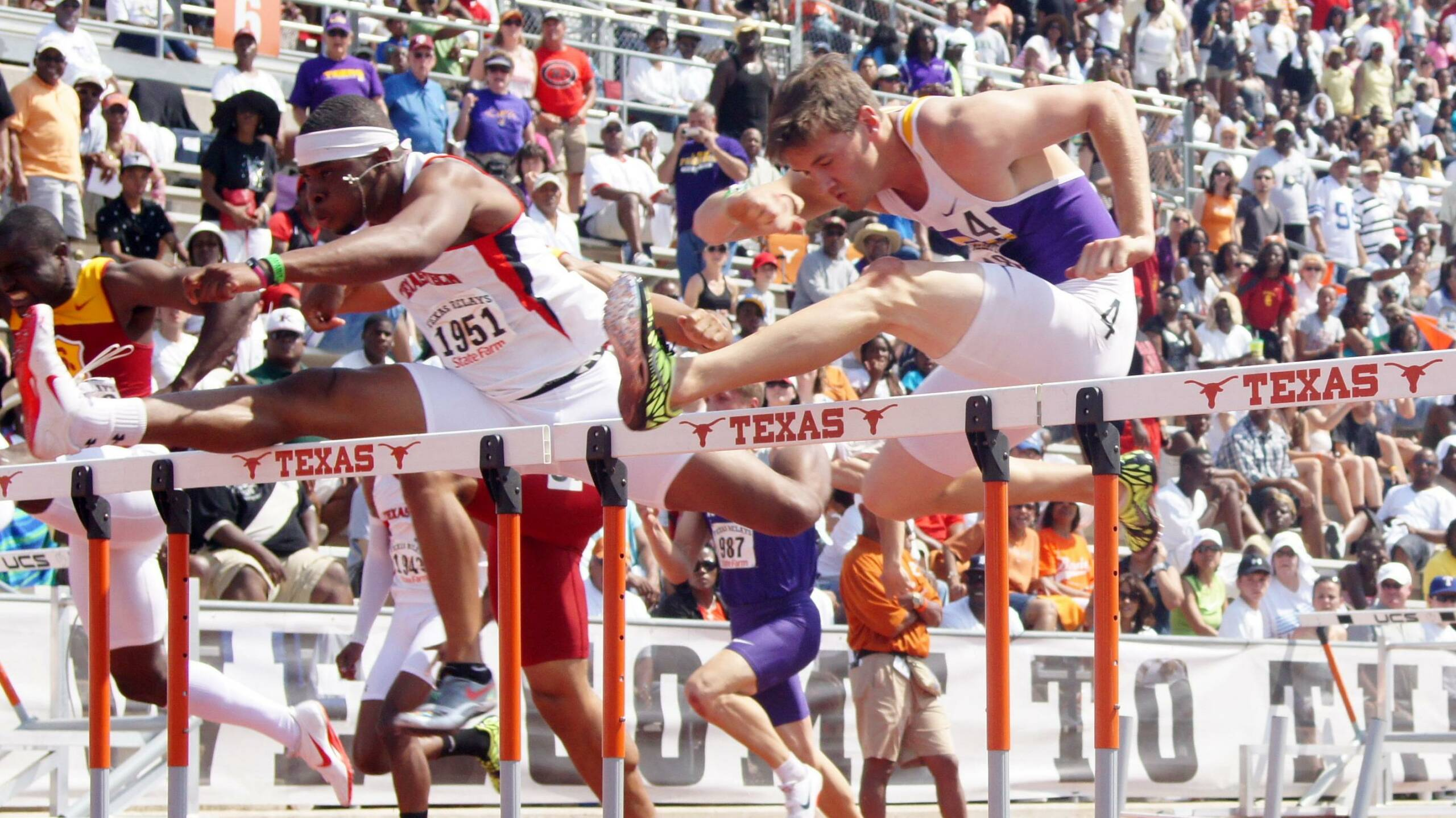 AUSTIN, Texas – LSU’s title sweep in the 4×200-meter relay and a historic victory by junior Barrett Nugent in the men’s 110-meter hurdles helped set the stage for an exciting championship Saturday for the Tigers and Lady Tigers at the 84th Clyde Littlefield Texas Relays held at Mike A. Myers Stadium.

By capturing four event championships on the weekend, LSU now ranks among the all-time leaders in the long and storied history of the Texas Relays with 69 individual and 65 relay championships all-time.

In addition to winning three event titles Saturday afternoon in front of a crowd of 18,369, the Lady Tigers opened the meet by winning their third Texas Relays 4×800-meter relay crown in the last four seasons.

“This is always an exciting day for us at the Texas Relays,” said LSU head coach Dennis Shaver. “We did a great job of competing as a team today. We’re a better team today than we were when we arrived here at the meet. That’s a credit to our athletes in the way they represented our program. Across the board, I think our athletes just committed themselves to competing in a championship environment.

Nugent, who entered the Texas Relays as the No. 3-ranked hurdler in the NCAA this season after setting a 2011 seasonal best of 13.58 seconds at the LSU Invitational just one week ago, lined up in the events final with No. 1-ranked Omo Osaghae of Texas Tech to his right and the No. 2-ranked Keiron Stewart of Texas to his left in the middle of the track in an early-season battle of NCAA championship contenders.

And after firing out the blocks and touching down over the first hurdle ahead of the rest of the field, it was Nugent who struck gold by running a wind-aided 13.19 (+3.5) to finish the race ahead of Osaghae (13.22) in second place and USC’s Oscar Spurlock (13.39) in third place. Stewart finished well back from the rest of the field in fifth place overall after running 13.43w in the final.

The junior from Maurice, La., became the first LSU Tiger in 36 years to win the 110-meter hurdles during the Texas Relays. Former national champion Larry Shipp was the last to win the event back in 1975 as the two hurdle stars are the only Tigers to capture the event crown in meet history.

Nugent’s performance is even more impressive considering that only the legendary Renaldo Nehemiah of Maryland is faster over the 10 hurdles under all conditions in NCAA track and field history.

By running a wind-aided 13.19 on a windy Saturday afternoon, Nugent put his name alongside USC great Robert Reading in 1989 as the No. 2-ranked performer in the 110-meter hurdles in collegiate history. That also gives him the No. 4-ranked performance in the NCAA all-time under all conditions.

Not only does Nugent overtake Osaghae for the No. 1 ranking in the NCAA this season, he is also rated at No. 2 worldwide in the men’s 110-meter hurdles under all conditions.

After defeating the defending NCAA Outdoor champion and reigning NCAA Indoor champion during the LSU Invitational a week ago in the form of Illinois star Andrew Riley, along with his victory over Stewart and Osaghae on Saturday afternoon, Nugent appears ready for a national title run of his own this season.

“There are only two things I focus on when I’m in the race – a good, hard step out of the blocks so I’ll get out to a fast start and hurdle clearance. If I do that, I know I’ll run fast,” Nugent said. “What happened out there today just shows what I’ve done to get here. It has been tough at times this season and Coach Shaver has had to ride me a little bit, but it’s really starting to pay off in a big way.

“This is only a start of what I want to do this season at NCAAs. My goal is to win a championship. That’s what I expect from myself and what my team needs for me to do.”

In LSU’s first championship final during Saturday’s competition, the Tigers scorched the track at Mike A. Myers Stadium to the tune of a new school record and Texas Relays meet record in taking home their first 4×200-meter relay crown since 2007 and their ninth victory all-time at the Texas Relays.

The Tigers, who already owned the fastest time in the nation this season at 1 minute, 20.99 seconds set for the win at the LSU Tiger Relays two weeks ago, ran more than a half second faster on Saturday as junior Keyth Talley, junior Horatio Williams, senior Tristan Walker and senior Gabriel Mvumvure combined for a winning time of 1:20.45 to become the fastest 4×200-meter relay team in Texas Relays history.

Walker was actually running head-to-head with Texas A&M freshman Prezel Hardy, Jr. on the third leg at the final exchange, but LSU extended its lead thanks to a fumbled handoff by the Aggies, with Mvumvure cruising to the finish line more than three seconds ahead of Arkansas (1:23.52).

The Lady Tigers would not be outdone as they followed with a dominating win of their own in the 4×200-meter relay they completed the sweep with a winning time of 1:30.88. Junior Rebecca Alexander, junior Semoy Hackett, junior Cassandra Tate and sophomore Kimberlyn Duncan teamed for the fourth-fastest in school history to finish more than one second ahead of defending champion Texas A&M (1:32.01).

With the victory, the Lady Tigers captured snapped a five-year drought with their first 4×200 relay title in the Texas Relays since 2006 and their seventh event championship in meet history.

And by completing the sweep of men’s and women’s 4×200-meter relay crowns Saturday afternoon, LSU became just the second program in meet history to win both event titles in one season as they matched the sweep by the Texas A&M men and women during the 2009 and 2010 seasons.

The Tigers and Aggies locked horns again in the finals for the Clyde Littlefield Men’s 4×100-Meter Relay championship in a race between the two fastest sprint relay teams in the NCAA this season.

This time around, it was the Aggies holding the upper hand as Texas A&M took the title in 38.71 to finish ahead of the 2011 seasonal best of 38.78 recorded by the Tigers. LSU ran with the same team that clocked the previous national-leading time of 38.87 at the LSU Relays two weeks ago as Nugent, Williams, Talley and Mvumvure carried the baton around the track with the NCAA’s No. 2-ranked time this season.

The Lady Tigers also earned a runner-up finish in the final of the women’s 4×100-meter relay, clocking at 43.44 to finish second to the 42.87 posted by the national leaders from Texas A&M.

“Our performance today was more about the confidence we have in one another than anything else. In this meet, in this atmosphere, we were really running for that record (in the 4×200 relay),” Mvumvure said. “It was something we knew we could do because we had already run 1:20 this season. We knew we would be pushed today, and that really helped us as well in the race.

“The 4×100 didn’t go the way we wanted it to go. You always want to run fast, but you really want to win it even more. We just have to step it up come championship time.”

But the Tigers would not stop with their seasonal-best performances in the 4×100 and 4×200-meter relays, as they wrapped up the meet with one of the nation’s best runs in the 4×400-meter relay.

In the meet’s finale with the running of the Cleburne Price, Jr. Men’s 4×400-Meter Relay, LSU raced to a third-place finish in 3:02.23 as junior Robert Simmons, junior Ade Alleyne-Forte, junior Riker Hylton and sophomore Caleb Williams recorded the nation’s third-fastest time this outdoor season and the No. 7-ranked mile relay performance in the history of the LSU track and field program.

The Tigers finished behind only the relay teams from Texas A&M (3:00.45) and Baylor (3:01.77), during a race which produced the three fastest times in the country this outdoor season.

The Lady Tigers earned a fifth-place finish for the women’s 4×400-meter relay finals after junior Rebecca Alexander, Tate, sophomore Latoya McDermott and junior Jonique Day crossed the finish line in 3:34.00. The Lady Tigers own a 2011 outdoor seasonal best of 3:33.63 set last weekend at the LSU Invitational.

In addition, the LSU women produced some of the NCAA’s leading times between four finalists from the 100-meter dash and 100-meter hurdles on a windy afternoon at Mike A. Myers Stadium.

After leading the Lady Tigers to the 4×200-meter relay crown, Hackett and Duncan finished 2-3 during an exciting final in the women’s 100-meter dash that was run with a strong tailwind of +2.9. Hackett raced in with a wind-aided 10.98 to take second place, while Duncan followed behind in third place after posting a time of 11.07. The Lady Tigers duo now ranks No. 2 and No. 4, respectively, in the NCAA rankings.

Freshman Jasmin Stowers added a third-place finish in the women’s university 100-meter hurdles running a wind-aided 12.86 (+3.6) in a performance that moves her into the No. 3 position for the national ranking this spring. Senior Tenaya Jones followed in seventh place with a seasonal best of 13.11w.

Saturday also proved to be a banner day for the LSU pole vaulters as junior All-American Rachel Laurent shattered her own outdoor school record to earn a third-place finish in the women’s championship.

Laurent, who had already broken her own school record this season with a clearance at 14 feet, 2 ½ inches at the LSU Tiger Relays two weeks ago, went up and over the bar at 14-3 ¼ on Saturday to finish third for the competition behind only Arkansas’ Tina Sutej (14-9) and Texas Tech’s Shade Weygandt (14-7 ¼).

Perhaps inspired by the performance of his teammate, senior Marcus McGehee set a personal best himself with a fourth-place finish in the men’s pole vault as he cleared 17-6 ½ on his first attempt.

McGehee, an NCAA Indoor Championships qualifier this year who had already set an outdoor PR of 17-4 ½ earlier this season at the LSU Tiger Relays, moved himself up two spots into the No. 8 spot on the LSU all-time outdoor performance list ahead of Mark Rose (17-5) and Daniel Trosclair (17-4 ¾).

Next up for the LSU track and field teams is a Spring Break trip to sunny Miami, Fla., as they are ready to compete at the Hurricane Alumni Invitational on April 16 at Miami’s Cobb Stadium. The squads will then return to the Bernie Moore Track Stadium in Baton Rouge on April 23 to host the LSU Alumni Gold.