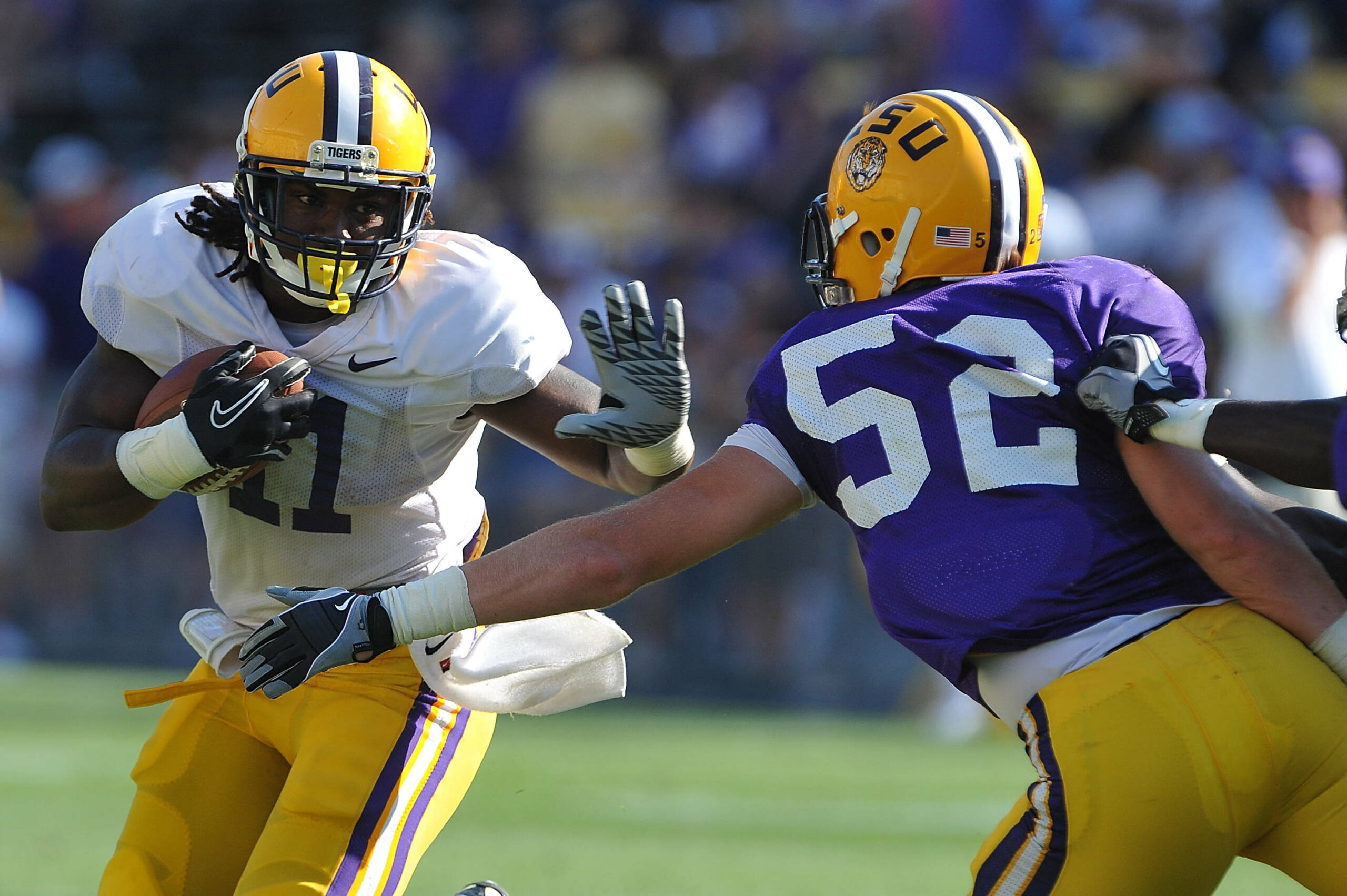 BATON ROUGE — A crowd of 25,032 joined the LSU football team for its annual Spring Game on a glorious Saturday in Tiger Stadium, as the White team used two touchdowns by running back Spencer Ware to win, 22-7.

Sophomore quarterback Zach Mettenberger rifled a 60-yard touchdown pass for the Purple team on the first play of the second half, but that was all of the points to be allowed by the Tigers stellar defense.

Ware led all backs with 94 yards on 13 carries, both game highs. His 23-yard run setup a 3-yard touchdown in the first quarter that gave the White side an advantage it wouldn’t relinquish. During the two-minute drill that ended the game, Ware scored on the final play from 18 yards. He also had two catches for 50 yards.

White quarterback Jordan Jefferson — who enters his senior season after leading LSU to an 11-2 record and a Cotton Bowl victory — passed for 102 yards and ran for 31. Starting for Purple, quarterback Jarrett Lee was 9-for-14 passing for 63 yards. Mettenberger finished 5-of-8 for 86 yards.

White placekicker Drew Alleman was 3-of-4 on field goals, connecting from 22, 36 and 28 yards.

The White team took over after a quick three-and-out by Lee to open the game.

After a 24-yard pass from Jefferson to Fobbs, Ware reeled off 23 yards along the left sideline to Purple 3 before hammering around the right end for a touchdown. White led 7-0 with 11:31 left in the first quarter.

On the ensuing possession, Purple’s Blue cut past safety Craig Loston scampered 39 yards to the White 33-yard line. On third-and-7 from the 30, Lee connected with Boone for 11 yards to keep the drive alive. Faced with third-and-7, Lee was pressed out of the pocket to his left and threw an interception to White safety Eric Reid at the 6.

White took advantage of the turnover, as Jefferson put together a 14-play, 83-yard drive before adding an Alleman 22-yard field goal. White led 10-0 with 14:49 left in the first half.

Playing for the Purple team, Mettenberger completed his first pass in an LSU uniform to wide receiver James Wright for eight yards. On third-and-2, Wright made another diving catch for 11 yards to the White 48. After a pass interference penalty on White, Mettenberger dropped back to the Eye of the Tiger at midfield and heaved a 50-yard pass that Boone couldn’t handle at the goalline.

After a Purple punt, Ware ran for eight yards to get the Tigers off the shadow of its endzone, and Jefferson earned a first down by drawing freshman defensive tackle Anthony Johnson offside with a hard count. On the next play, Jefferson fired a pass toward midfield that was out of the reach of wide receiver Rueben Randle and undercut by safety Ronnie Vinson for an interception at the Purple 48.

Mettenberger and the Purple squad gained only one first down before punting back to White’s 12-yard line. However, a three-and-out and a short punt by White put Purple back on the field at midfield.

Purple earned a first down on a 16-yard run by Lee, but the quarterback later had the ball knocked out of his hand by White defensive end Barkevious Mingo to end the drive at the White 33.

With 2:04 left in the half, Jefferson rolled out of the pocket to his left and found Ware for a 46-yard completion to the Purple 17. The quarterback ran for five yards to the 12, but was ruled to be sacked by Johnson on third down. A 36-yard field goal by Alleman was true with eight seconds to play in the half, and White led 13-0.

Mettenberger opened the second half — which included a running clock — by hurling a 60-yard touchdown pass to Boone on the first play. The transfer QB dropped back to pass at his 35 and hit the second-year receiver in stride at the 13 to cut the lead to 13-7.

Because the structure of a Spring Game second half changes like the weather, Purple took over again to give the offensive side additional work with the 6-foot-5 first-year quarterback.

A 26-yard run by Gore moved Purple into White territory at the 30, but Alleman’s 25-yard field goal attempt was missed to the left.

Just before the two-minute mark, Alleman added another 28-yard field goal that extended the advantage to 16-7.

Lee went under center for the White team during the two-minute drill and completed 4-of-7 passes for 39-yards before Ware capped the drive with an 18-yard touchdown run.

On Zach Mettenberger and Jarrett Lee’s performances in today’s game …
“They did great. They managed the game, made the right reads and that’s what we expect from this position. Jarrett (Lee) did a great job in the last two-minute drill with the final touchdown, and Zach (Mettenberger) did a great job with the one-on-one to Kadron Boone. He made great passes and great reads.”

On receiving a spring award this year …
“That just says that my efforts and my performance has been acknowledged by the coaches. I made sure that I gave my best efforts this spring. It is my last spring, and my senior year, so I told myself that I needed to practice 110 percent every practice in order for me to become better. That’s what I had to do.”

On Russell Shepard’s performance …
“Russell is a great athlete. Wherever you put him, he is going to make plays for you. We have him at the position he needs to be at out wide, and he is doing a good job for us. He is just a great athlete. He is smart and knows the game of football.”

On Jordan Jefferson’s improvement …
“Coming off a strong Cotton Bowl he is going to keep improving. He is becoming a more mature and complete player. Coach Kragthorpe coming in has really helped, and we have really learned a lot from him. Jordan is having a great spring and doing a great job right now.”

On the team’s improvement from last spring …
“This game was a little bit better for us as far as spring games go. We are growing up, maturing and Coach Kragthorpe coming in has really helped us. We have done a great job this spring and have become more mature players.

On his mentality for the spring game …
“This is a real game, and that’s how you have to look at it. The spring game is for evaluation, and I feel like I am going to do whatever I can to set myself above.”

On his breakout run in the game …
“It felt good. At first, I was a little tight, but I loosened up a little bit once I got that run. I just had to go from there.”