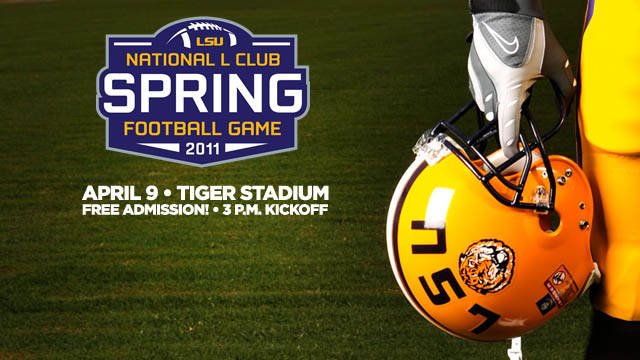 BATON ROUGE – Fans will get a glimpse of the 2011 LSU football team for the first time on Saturday as the annual National L Club Spring Game takes place starting at 3 p.m. in Tiger Stadium.

The National L Club Spring Game is just one of the many activities taking place on campus on Saturday as LSU is throwing a free concert by Louisiana’s own Amanda Shaw at 12:30 p.m. on the west side of Tiger Stadium. In addition, an autograph party featuring over 30 former LSU All-Americans and 20 Tigers who are currently in the NFL will be held starting at 1 p.m.

Fans attending the autograph party will receive a commemorative poster, featuring all 58 LSU All-Americans. In order to accommodate everyone, fans are asked to only have one item for the autograph session.

Fans are also reminded that following the spring game, they can catch the LSU softball team in action against Alabama starting at 6 p.m. at Tiger Park. Fans going to the softball game can get free seating in the general admission section of Tiger Park.

The spring football game, which is televised by ESPN, will kickoff just after 3 p.m. and will have the White facing the Purple in an unscripted game during the first half. The second half will consist of running time and will feature game-like situations at times.

“This is going to be just like a real game,” LSU coach Les Miles said. “There are obviously some things that we aren’t going to show, but we want the players to go out there, have fun and compete. I know that we have had a very productive spring up to this point and we want to make sure that we get the most out of this final day.”