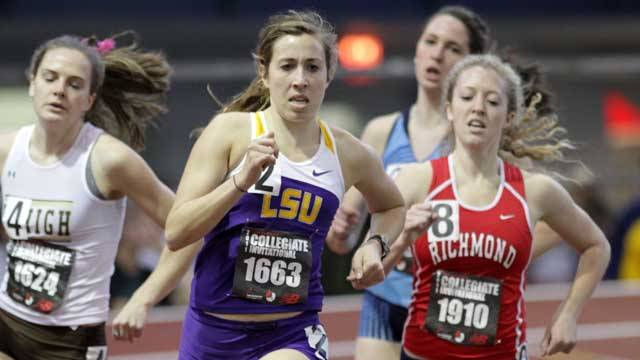 AUSTIN, Texas – For the third time in the last four seasons, the Lady Tigers captured the first relay championship of the Clyde Littlefield Texas Relays with their dominating victory in the university 4×800-meter relay final on a beautiful Thursday evening at Mike A. Myers Stadium at the University of Texas.

After receiving the baton from sophomore Laura Carleton on the second leg, senior Brittany Hall put LSU in the lead with a 2:05.5 split before handing off to sophomore Brea Goodman on the third leg of the relay order. Sophomore Charlene Lipsey then anchored the Lady Tigers to a commanding victory with a split at 2:04.8 and a winning time of 8 minutes, 39.19 seconds.

The LSU women finished nearly three seconds ahead of runner-up Texas Tech (8:41.61) for the first relay crown of this year’s Texas Relays as their time of 8:39.19 is the 10th-fastest in school history.

With Thursday’s victory, LSU has taken a total of 63 relay championships all-time at the Clyde Littlefield Texas Relays in a tradition that dates back to winning its first relay title during the 1925 season.

“That is a great start for our team this weekend,” said LSU head coach Dennis Shaver. “Our women enjoy competing in that event at the Texas Relays each year, and their performance today just goes to show how motivated they were to come out and reclaim the title they won two years ago.”

While the Lady Tigers returned to the top of the award’s podium for the first time since 2009 on Thursday evening, the competition also saw one of the more remarkable streaks in collegiate track and field come to an end with Walter Henning‘s fifth-place finish in the championship final of the men’s hammer throw.

Henning, who entered this year’s Texas Relays with 18-straight victories against collegiate competition in the weight throw indoors and hammer throw outdoors, recorded a series-best throw on his third attempt of the competition at 207 feet, 7 inches to place fifth overall. The defending Texas Relays champion finished behind this year’s event champion Chris Cralle of Sam Houston State (221-1).

Thursday’s finish marked the first time since his sophomore season for 2009 that Henning has fallen short of victory when he earned a national runner-up finish at the 2009 NCAA Outdoor Championships.

Despite his shortcoming, Henning remains a strong contender for The Bowerman this season as he owns a NCAA Indoor title in the weight throw and victories in his six previous competitions on the year.

LSU junior All-American Michael Lauro earned a bronze-medal winning third-place finish in the event as he set a 2011 outdoor seasonal best of 210-6 on his fourth throw on the competition. Senior Ross Roubion finished the event in ninth place overall with a top throw of 196-11 on his second attempt.

“What else can you say about what Walter Henning has accomplished during his career here at LSU? You rarely see an athlete dominate his event at the collegiate level like Walter has done over the past couple of years,” Shaver said. “I know he would have liked to make it 19 wins in a row today, but I am positive that this experience will serve as even more motivation the next time he steps into the circle.”

The Lady Tigers were among the top performers in the women’s hammer as junior Brieanna Kennedy and freshman Karen Henning each set new personal records in LSU’s first event of this year’s meet.

Kennedy let the hammer fly 184-4 on her very first throw of the meet to earn a fourth-place finish through the event with the No. 5-ranked performance in the history of the LSU women’s track and field program. Karen Henning followed Kennedy in fifth place overall with her personal-best throw of 183-2 that was set on her fifth attempt and ranks as the No. 6 performance all-time in school history.

The action at the 84th Clyde Littlefield Texas Relays continues Friday morning with the preliminary round of the 4×100-meter relays beginning at 9:30 a.m. CDT. Fans can receive live updates throughout the event by becoming a fan of LSU Track & Field on Facebook and by following @LSUTrackField on Twitter.