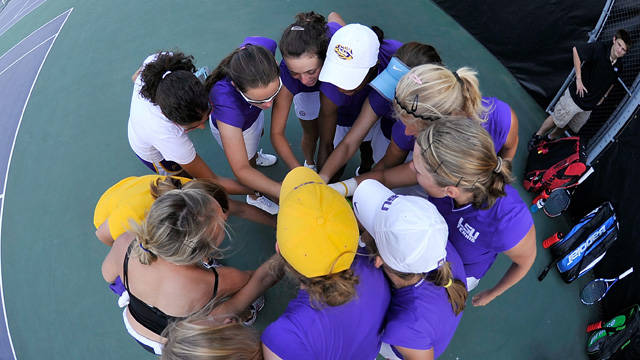 BATON ROUGE – The LSU women’s tennis team returns home to begin its final homestand of the season, facing No. 21 Vanderbilt on Friday at 3 p.m. CDT at W.T. “Dub” Robinson Stadium.

The Lady Tigers (10-10, 4-4 SEC) are coming off splitting their two matches on last weekend’s SEC road trip, defeating Auburn 5-2 on Friday before falling to No. 27 Alabama on Sunday. Vanderbilt (10-7, 4-4 SEC) also went 1-1 last weekend as the Commodores knocked off No. 37 South Carolina 4-3 to open the weekend prior to dropping Sunday’s contest to No. 2 Florida 7-0 in Nashville.

“Vanderbilt is a great team,” said LSU women’s tennis coach Tony Minnis. “This is another opportunity for us to get a win against a quality conference opponent and improve our position in the SEC West.”

The Commodores are fueled in singles play by Chelsea Preeg. The junior has amassed a team-best 11-4 spring singles record while playing out of the No. 2 and 3 posts. Currently checking in at No. 76 in the ITA singles rankings, Preeg has struggled of late, however, dropping her last three matches.

Freshman Lauren Mira helps guide Vanderbilt at the No. 4 slot. She has compiled a 10-5 record this spring following leading the team in the fall with an 11-2 record.

Rachael Dillon and Alex Leatu combine to form the Commodores ace doubles team. Ranked No. 58 nationally, the twosome has recorded an 8-8 record this spring season including a 4-4 mark in SEC matches. They have won four of their last six contests with their two losses coming to top-20 ranked doubles teams.

LSU sophomore Kaitlin Burns assists the Lady Tigers’ efforts on the singles courts. The Wilmington, N.C., native is coming off a tough three-set defeat to Alabama’s Courtney McLane on Sunday after knocking off Olivia Bennett of Auburn 6-4, 7-6 (7-2) to begin last weekend’s play.

After being apart the last four matches, Wolf and Burns will reunite on Court 1 to help turn things around for the Lady Tigers in doubles action. The 62nd-ranked duo has gone 4-3 this spring season including winning two matches against nationally-ranked opponents.

Live stats will be provided for Friday’s match and can be followed at www.LSUsports.net/livestats.

LSU will close out its 2011 home schedule on Sunday at 1 p.m. against Kentucky. Fans are encouraged to arrive early on Sunday as Lady Tiger senior Kylie Adamek will be honored prior to the match.