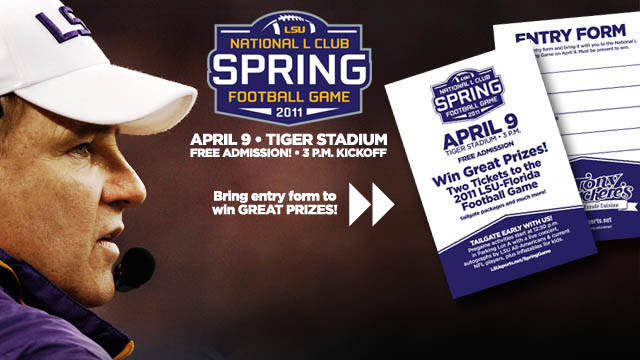 BATON ROUGE – Fans will have opportunities to win prizes, get autographs from over 25 former LSU football All-Americans and get a sneak preview of the 2011 Tigers on Saturday, April 9 as LSU hosts its annual National L Club Spring Game in Tiger Stadium.

Kickoff for the National L Club Spring Game is set for 3 p.m. CT.

Rosters for the white and purple teams (.pdf) are now available.

Pre-game activities on campus get underway at 12:30 p.m. as Louisiana native Amanda Shaw will hold a free concert in Lot A at Tiger Stadium. Shaw, who will be one of the performers at the Bayou Country Superfest in May, will be on stage until 2:30.

In what is believed to be the first autograph party of its kind at LSU, over 25 former Tiger football All-Americans will be on hand to meet fans and sign autographs beginning at 1 p.m. in Lot A at Tiger Stadium. Some of the LSU Greats who will be on hand include Bert Jones, Kevin Faulk, Kyle Williams, Jerry Stovall, Wendell Davis and many others.

A special area dedicated for kids will also be part of the pre-game activities starting at 1 p.m. that day. The kids zone, also located in Lot A at Tiger Stadium, will feature inflatables, face painting, balloon animals and much more.

Starting Wednesday, March 30, fans can pick up entry forms to register to win prizes courtesy of Tony Chachere’s at the National L Club Spring Game at 46 McDonald’s locations in the Baton Rouge area and at the five Academy Sports locations.

Fans can also print out a copy of the entry form here and bring to the game. Fans will be asked to submit their entry forms when entering Tiger Stadium next Saturday and winners will be called throughout the game. Fans must be present to win.

Among the prizes that will be given away include: a pair of tickets to the 2011 LSU-Florida football game in Tiger Stadium, a complete tailgate package from Tony Chachere’s, autographed LSU memorabilia, and other items courtesy of Tony Chachere’s.

Following the football game, LSU fans who attend the spring game can get free seating in the general admission sections of Tiger Park as the Tigers host Alabama in softball.

Below are the expected attendees for the autograph session. Subject to change.