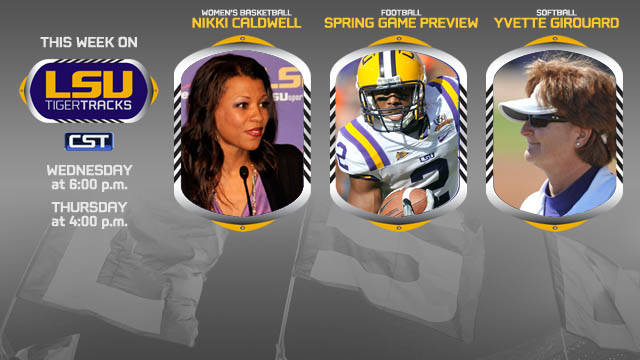 BATON ROUGE, La. – This week’s installment of LSU Tiger Tracks, a program highlighting various aspects of the university and its athletic department, can be seen at 6 p.m. Wednesday and 4 p.m. Thursday on Cox Sports Television.

LSU Tiger Tracks opens this week with a conversation between correspondent Garrett Walvoord and new women’s basketball coach Nikki Caldwell, who was appointed this week to direct the tradition-rich Lady Tiger program.

Walvoord follows the Caldwell interview with a preview of the Football Spring Game that kicks off at 3 p.m. Saturday in Tiger Stadium.

The show concludes with a visit from softball coach Yvette Girouard, who discusses the Tigers’ home series this weekend against top-ranked Alabama.