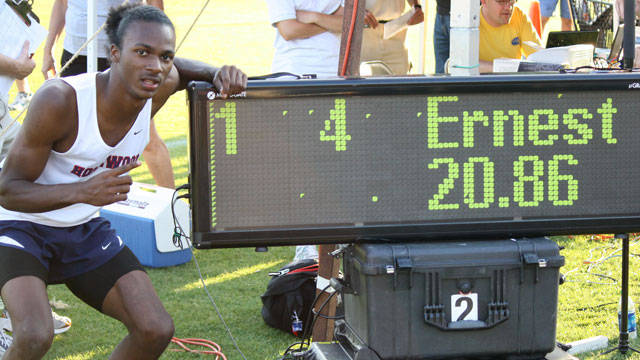 BATON ROUGE – LSU men’s track and field recruit Aaron Ernest of Homewood High School in Homewood, Ala., enjoyed a weekend to remember at the Mobile Challenge of Champions on Saturday as he won the boy’s 100-meter dash, 200-meter dash and long jump en route to earning meet MVP honors.

Ernest, who signed with the Tigers in February as one of the nation’s leading sprint prospects for the high school level, earned an impressive sweep of 100-meter and 200-meter dash titles in Saturday’s action

Ernest dominated a field featuring many of the top prep athletes from across the Southeast with his win in the 100-meter dash as he cruised to victory in a wind-aided 10.17 seconds with the help of a +2.4 tailwind at his back. That performance ranks No. 1 nationally in all conditions by a high school sprinter.

“I knew I’d be running fast this early in the year. It was just a matter of time until I broke through,” Ernest said. “My coach kept telling me that I was going to run 10.2, but I didn’t believe it would be that fast. I guess I was a little bit right. I didn’t run a 10.2, it was faster! Now, I just have to try to prove myself in the 100 again because it was wind-aided. I look forward to doing that this year.”

Ernest took down the previous Mobile Challenge of Champions meet record of 20.89 that was set in 2009 by former prep star and current Mississippi State All-American Tavaris Tate of Starkville, Miss.

“Breaking Tate’s record shows me that I can compete with the best of the best in high school,” Ernest said about the record. “In the moment, I was happy about breaking his record. It’s one of the greatest feelings in the world. I just want to continue to improve from here as we get deeper into the season.”

If his sweep of sprint titles in the 100-meter and 200-meter dashes was not enough, Ernest added the boys long jump crown to his resume on Saturday as he jumped a wind-legal 23 feet, 2 inches (+0.1) to secure a third event championship with the No. 6-ranked performance nationwide this season.

But Ernest was not the only LSU recruit to capture an event championship with a meet record on Saturday as Andreas Duplantis of Lafayette High School in Lafayette, La., took home the men’s pole vault title this weekend with a clearance of 16-7. Duplantis broke the previous 5-year-old meet record of 16-6 set during the 2006 outdoor season by former Kansas NCAA champion Jordan Scott.

Duplantis is currently the nation’s No. 4-ranked high school boy’s pole vaulter for the 2011 season with a seasonal-best and personal-best clearance of 16-10 set at the Lafayette Oil City Relays on March 18.