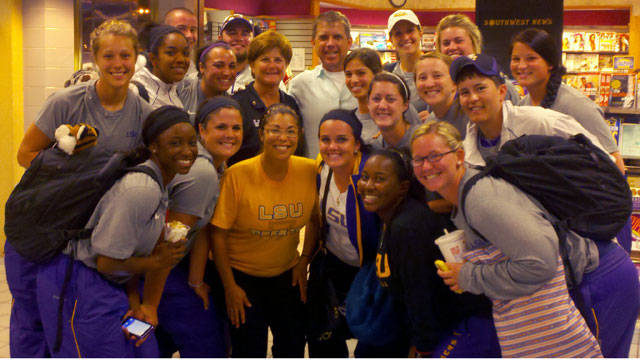 Juliana Santos, SS, Jr., Newman, Calif.
Santos put together an impressive 7-for-12 weekend with three RBIs as LSU swept Arkansas to extend its winning streak to six games. Santos recorded a hit in all three games and boosted her average by 49 points during the series. In the middle game, Santos equaled a program single game record and turned in a sparkling 5-for-5 performance at the plate. She joined Lauren Castle as the only players in LSU history to reach that impressive feat and is only the second player in the SEC this season to reach five hits in a game. The Newman, Calif., product also added three RBIs to fuel the historic performance.

Rachele Fico, P, So., Oxford, Conn.
Fico returned to her SEC Freshman of the Year form and fired back-to-back shutouts to secure a sweep of Arkansas. Entering the weekend with only one shutout, the sophomore right-hander racked up 16 strikeouts over her 14 innings of work and limited the Razorbacks to seven hits on a .146 batting average for the series. During the finale, Fico notched a strikeout in every frame and tallied 11 Ks en route to her third double-digit effort of 2011. She retired 14 consecutive batters at one point in the 1-0 triumph. The Oxford, Conn., native opened the series with a four-hitter and has pieced together 16 straight scoreless frames during LSU’s six-game winning streak.

Tammy Wray, 3B, Fr., Somers, N.Y.
Wray continued her hot streak with a .400 batting average, two home runs and six RBIs during LSU’s sweep of Arkansas. She pushed her hitting streak to five games highlighted by a pair of three-run home runs during the opening two contests of the series. The Somers, N.Y. native has lifted her average over .300 mark for the season and connected for a long ball in three of her last four outings. Wray also has added a RBI in five of her last six games to bring her tally to a team-best 25 for the season.

Notes on the Tigers
LSU came off its SEC bye weekend with a vengeance and outscored Arkansas by a 19-1 margin en route to a three-game road sweep. Playing as an unranked team for the first time since 2005, the Tigers pushed their winning streak to six games behind a balanced offensive attack. Ashley Langoni opened the series with a 3-for-4 performance and a career-best five RBIs. In the middle game of the set, Juliana Santos matched a program single-game mark with a five-hit effort. The junior shortstop joined Lauren Castle as the only players in program history to reach the impressive feat. Castle tallied her 5-for-5 outing during a 15-9 triumph over Mississippi State on March 31, 2005. Tammy Wray also posted a pair of three-run home runs during the first two games of the series to bring her total to a team-best 25 RBIs for the season. LSU’s pitching duo of Rachele Fico and Brittany Mack limited Arkansas to one run and claimed a 0.33 ERA while holding the Razorbacks to a .160 hitting clip for the weekend. Fico racked up 11 Ks during the series finale and sat down 14 consecutive batters at one point to secure the 1-0 triumph. Anissa Young platted the game’s lone run on a two-out, RBI-single in the fifth inning. LSU faces Nicholls State on Wednesday before welcoming top-ranked Alabama to Tiger Park over the weekend. Sunday’s game will be televised on ESPNU as part of the SEC on ESPN package.