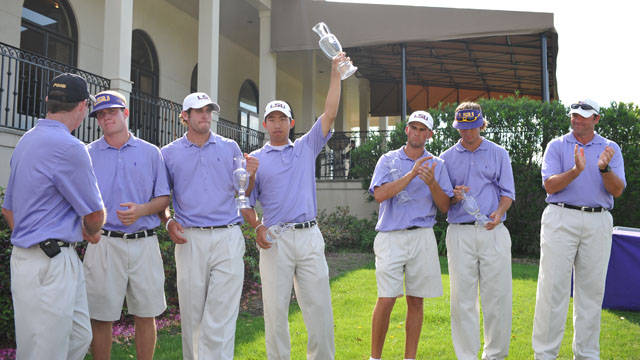 BATON ROUGE – After facing a two-stroke deficit when teeing off in Sunday’s final round at the LSU National Invitational, the No. 9-ranked LSU men’s golf team posted the second-lowest team score for the afternoon while defending its home turf at the University Club and capturing its fourth tournament crown of the 2010-11 campaign with a 54-hole score of 22-over par 886.

The Tigers posted a 9-over 297 during Sunday’s championship finale to finish just one stroke ahead of the nation’s No. 46-ranked squad from Chattanooga. The Mocs fired the lowest round of the afternoon with a 4-over 292 to finish runner-up to the Tigers with a team score of 23-over 887 for the weekend.

In a rare feat, the Tigers actually captured their second team championship of the week in defending their crown against a strong 15-team field at the Hootie at Bulls Bay Intercollegiate on Tuesday.

LSU now owns four tournament championships of the 2010-11 season as they also picked up two wins in the fall at the Gopher Invitational (Sept. 12-13) and David Toms Intercollegiate (Oct. 18-19). For the first time since the 1988-89 season, the Tigers have earned four wins during one campaign.

“The golf course played great this weekend. This is exactly what we expect when playing a championship course,” said LSU head coach Chuck Winstead. “The University Club provided the kind of challenge that we expected throughout the event. We also saw some crowds that we never see anywhere else and I know that our guys enjoyed their first experience competing here at the University Club.

“What’s even more rewarding for this program is the positive feedback we received from visiting coaches and players and how much they enjoyed the course. This is a tremendous venue for hosting championship golf at the collegiate level, and we look forward to having that opportunity again in the future.”

The Tigers, who are ranked as high as No. 9 in the country this week in the latest Golfstat Top 25, became winners for the 11th time in six seasons with Winstead leading the program.

That includes 10 victories in 34 tournament appearances over the past three seasons, which is the most for a three-year stretch for the LSU men’s golf program since winning 10 tournaments for the 1983-84 season through the 1985-86 season when Tiger great David Toms was a freshman.

Senior All-America Andrew Loupe fired the lowest score of the day for the Tigers with an even-par score of 72 as he picked up his team-leading fourth top-five finish of the season by finishing in fifth place.

Loupe, who also owns five top-10 finishes in what is sure to be another All-America campaign this spring with the Tigers, followed 3-over 75 in the first round and 1-under 71 in the second round with an even-par 72 on Sunday afternoon to finish in fifth place overall with a 54-hole score of 2-over 218.

While Loupe led the way with a 72 in the final round, fellow senior All-American and Ben Hogan Award candidate John Peterson set the pace throughout the weekend while finishing in a tie for third place on the leaderboard at 1-over 217. After finishing the first day of action at 2-under par for the championships with scores of even-par 72 and 2-under par 70, Peterson carded a 3-over 75 on Sunday to secure his second top five and team-leading sixth top-10 finish for his senior season.

Peterson actually finished in the Top 10 of the leaderboard for the fourth-straight tournament, as he builds momentum for the postseason beginning April 15-17 at the SEC Men’s Golf Championships.

Junior Sang Yi just missed earning his first top-10 finish of the campaign by tying for 12th place overall at 9-over 225 for the championship, including a 2-over 74 in the final round. While Yi has yet to crack a top 10 this season, he owns four top-15 finishes during his junior campaign with the Tigers.

“It was difficult out there today. We certainly had to overcome our share of adversity to get the victory for our program,” Winstead said. “I don’t think there are two guys you would rather have on your side coming down the stretch than John Peterson and Andrew Loupe. Those guys are so mentally tough during the round, which is something they have developed during their four years in our program.

“There are a lot of things to be learned in an event like this. You’re not going to always play your best out there, and our guys know they have so much more in them than what they showed this weekend. But they pushed through the adversity and really competed throughout the tournament.”

Five Tigers also competed as individuals this weekend at the LSU National Invitational, as senior Clayton Rotz and freshman Andrew Presley led the way with a pair of top-10 finishes on the leaderboard.

Presley fired back-to-back rounds of even-par 72 on Saturday and a 5-over 77 on Sunday to capture a first career top-10 finish during his collegiate career with an eighth-place finish at 5-over 221. Rotz finished in the Top 10 of the leaderboard for the second time this season with a 54-hole score of 6-over par 222.

Chattanooga’s Stephan Jaeger led wire-to-wire to earn his first career individual collegiate championships as the only player in the field to break par for 54 holes with a total score of 7-under 209. While the course proved to be a difficult challenge for the rest of the field, Jaeger tamed the University Club with rounds of 2-under 70, 5-under 67 and even par-72 en route to a seven-stroke victory over Vince India of Iowa.

The Tigers will return to action in two weeks as they return to St. Simons Island, Ga., to compete with the premier conference in the country at the 2011 SEC Men’s Golf Championship. The 54-hole championship will be held again this spring at the Seaside Course at Sea Island Golf Club.