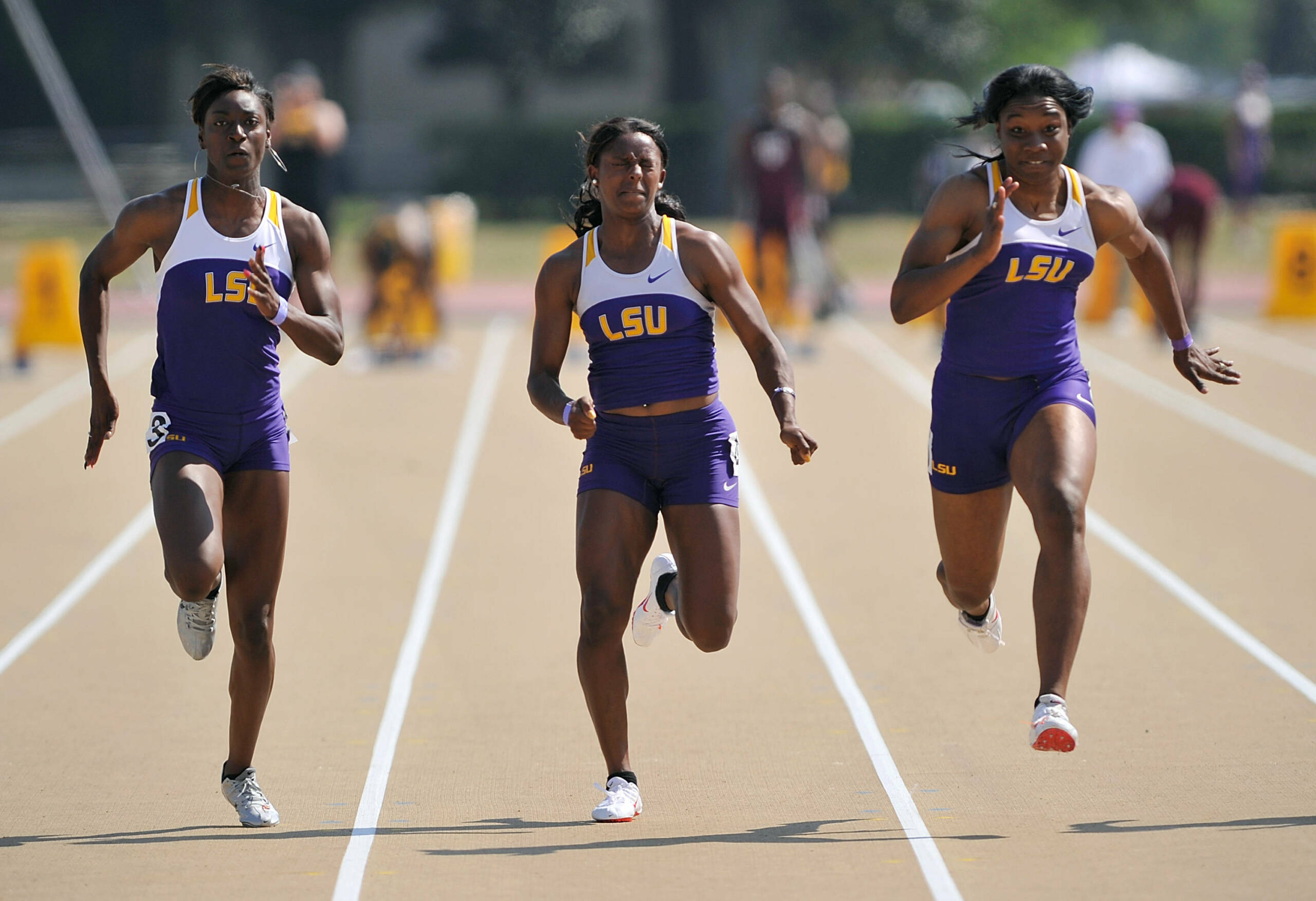 BATON ROUGE – A sweep of the men’s and women’s 200-meter dash titles and a win by junior Barrett Nugent over defending NCAA champion Andrew Riley of Illinois in the men’s 110-meter hurdles helped guide the LSU track and field teams to a pair of second-place team finishes at the LSU Invitational held at the Bernie Moore Track Stadium on Saturday afternoon.

The Tigers and Lady Tigers finished runner-up to men’s and women’s team champion Texas A&M in the LSU Invitational as the women scored 245.5 points and the men scored 172 points in the meet.

The Lady Tigers came up just 3.5 points shy of overtaking Texas A&M for the women’s team crown with the Aggies scoring 249 points in 18 events. Rounding out the women’s team scoring for the championship were Iowa (71) in third place, Illinois (43.5) in fourth place and Army (36) in fifth place.

“Scoring makes it fun,” said LSU head coach Dennis Shaver. “The athletes really take the performance to another level when they have the opportunity to compete against quality teams like this. Really, I think all of our meets ought to be scored, unless it’s a relays meet. Scored meets like this is what our sport needs at the collegiate level. This was just a beautiful day for a high-level track meet.

“We want this to be the start of a great new tradition here at LSU. We would like to get seven good teams, quality teams in here to help us create the kind of scored competition we’d like to have.”

Perhaps the most anticipated matchup of the inaugural LSU Invitational featured Nugent and Riley during the 110-meter hurdles in a battle between the nation’s premier talents in the event.

But Saturday’s showdown at the Bernie Moore Track Stadium went to Nugent as he clocked a season best of 13.58 seconds to edge Riley (13.61) at the tape. Nugent’s No. 3-ranked performance in the country this season was set while running into a very strong headwind measuring 2.5 meters per second.

“I feel really good about my race, despite hitting two hurdles,” Nugent said. “My hamstrings were kind of tight because we did a lot of hard training this week. Andrew and I have had some battles these last couple of years. The key for me is the first part of the race. If I can hang with him for the first 50 meters, I have a chance. I kept up with him the first 50 meters today and held on for the win.”

Lady Tiger sophomore Kimberlyn Duncan, the reigning women’s NCAA Indoor 200-meter champion, set a new lifetime wind-legal personal record in her 2011 outdoor debut in the event as she cruised to the title in 22.76, finishing well ahead of Texas A&M’s Dominique Duncan (23.23).

Duncan, who also set a wind-legal PR of 11.31 in a third-place finish in the 100-meter dash earlier during the meet, became the new NCAA leader, American leader and world leader outdoors for 2011.

Like Nugent, Duncan was forced to contend with some difficult conditions in her outdoor opener with her race being run into another strong -1.0 headwind on the backstretch at Bernie Moore Stadium.

Finishing ahead of Duncan in the 100-meter dash final was event champion Semoy Hackett (11.23) as the junior won her outdoor debut ahead of Texas A&M’s Jeneba Tarmoh (11.27).

“The 200 was fun today. I was really nervous before the race, but that’s a good thing,” Duncan said in the wake of her world-leading performance. “I always run well when I feel like that. I was very excited after I saw the time because I never imagined going 22 in my first outdoor meet. And for me to run 11.3 with the 100 is a huge PR, so I’m very excited about that too looking ahead.”

The Tigers actually completed the 200-meter sweep Saturday afternoon as three-time indoor All-America Horatio Williams opened his outdoor season by clocking 20.67 (-1.8) to take the men’s crown. He also set a new wind-legal PR of 10.25 in a third-place finish in the men’s 100-meter dash final.

Senior Brittany Hall and sophomore Charlene Lipsey made their presence known in their outdoor debut in the women’s 800-meter run by finishing the meet ranked No. 1 and No. 2 in the NCAA this season.

The duo scored 18 points for the Lady Tigers with a sweep of first and second place as Hall (2:04.88) beat Lipsey (2:05.05) across the finish line with the two fastest times in the country through three weeks of the outdoor season. Lipsey established a new outdoor PR with her 2:05.05 clocking in the race.

Junior NCAA title contender Cassandra Tate followed her season-opening run of 57.84 in the 400 hurdles at the LSU Relays a week ago by winning the event title on Saturday with a 2011 season best and national leader of 57.25, giving the Lady Tigers three NCAA-leading performances on the afternoon.

In just the second scored event for the afternoon on the women’s side, juniors Samia Stokes and Brieanna Kennedy gave the Lady Tigers an early lead in the team standings with a 1-2 finish in the discus throw.

Stokes, the NCAA’s No. 5-ranked performer in the event this season with a best of 177-4, won her second discus title in three meets with a top mark of 161-1 on her final throw of the competition. Kennedy posted a new eight-foot personal best with the No. 9-ranked mark in school history at 157-6 on her fifth throw.

Stokes then followed her win in the discus throw with a runner-up finish in the hammer as she helped lead another 1-2 sweep by the Lady Tigers with a personal-best toss of 176-3 on her first attempt of the day for the No. 7-ranked performance in school history. Freshman Karen Henning won the hammer with a best of 181-9 that ranks No. 5 on the school’s all-time performance list in the event.

Henning never looked back after taking an early lead with a mark of 204 feet, 4 inches on his first attempt of the competition, while improving with marks of 215-6 on his second throw and 216-9 on his last throw to clinch the victory. The Bowerman Award candidate now owns 18-straight victories against competition at the collegiate level, including seven-straight wins in the hammer since the start of the 2010 season.

The Tigers actually scored 24 points in the men’s hammer as junior Michael Lauro earned a second-place finish in his season debut with a mark of 202-3 and senior Ross Roubion followed in third place, throwing 197-10 on his fourth throw of the afternoon to complete the 1-2-3 sweep by the Tigers in the event.

In the first event on the track during the inaugural LSU Invitational, the Lady Tigers finished runner-up to Texas A&M (43.16) as the squad of freshman Toshika Sylvester, Hackett, Duncan and senior Kenyanna Wilson combined to run 43.48 for the NCAA’s No. 2-ranked performance in the early part of the year.

The Lady Tigers then wrapped up the meet by running the nation’s No. 2-ranked time in the 4×400-meter relay as sophomore Latoya McDermott, sophomore Siedda Herbert, Hall and Tate carried the stick around the track in 3:33.63 to finish in second place to NCAA Indoor champion Texas A&M (3:32.48).

The Tigers then followed by running the nation’s second-fastest time this season in the men’s 4×400 relay as junior Robert Simmons, junior Ade Alleyne-Forte, junior Riker Hylton and sophomore Caleb Williams teamed for a seasonal best of 3:03.33 to finish behind only Texas A&M (3:02.21) in the final event of this year’s LSU Invitational. LSU ran the same team that opened at 3:03.77 at the LSU Relays last weekend.

In all, the Tigers and Lady Tigers combined to win 14 event titles on the afternoon, while also recording a total of 17 personal-best performances during the inaugural LSU Invitational.

Mvumvure earned a second-place finish in the 100-meter final with the NCAA’s No. 3-ranked wind-legal performance of the season. Williams was just as impressive as his fourth-place clocking of 45.61 wrapped up the meet ranked No. 5 in the NCAA this season and No. 8 all-time in school history.

Several Lady Tigers also enjoyed personal-best performances during the event, including Kennedy for the outdoor shot put at 46-0, junior Jonique Day in the 400-meter dash at 53.91, redshirt freshman Abbey Karin in the javelin at 145-2 and freshman Denise Hinton in the hammer throw at 158-4.

The Tigers and Lady Tigers return to action next weekend with their annual trip to Austin, Texas, as they compete in the 84th Clyde Littlefield Texas Relays set for April 7-9 at Mike A. Myers Stadium.