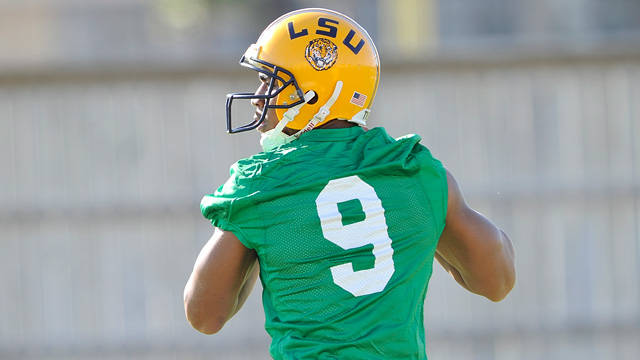 The 120-play workout saw the first and second teams split repetitions evenly, and it was the LSU defense who shined early before the offense got going through the air. The Tigers also got extensive work in on kickoffs, punting and field goals.

“All in all, we got a lot accomplished,” said LSU head coach Les Miles. “The defense started very sharp, and we had a difficult time moving the ball early. The offense made some mistakes on short yardage and motion penalties that allowed the defense to throttle them early. The offense gathered their momentum and fought back to play really well throughout the rest of the scrimmage.”

Jordan Jefferson continued his exceptional spring with four touchdown passes and Jarrett Lee added another. Rueben Randle hauled in three touchdown catches, including two acrobatic grabs over defenders in the corner of the endzone. Deangelo Peterson caught two touchdown passes from Jefferson. All of the scores came on situations that saw the Tigers working inside the 35-yard line.

“He (Jefferson) continues to get better,” said Miles. “The offense is becoming much more describable and he is making much better decisions. He has clearly improved. He can describe what he sees, how he sees the play and his description. (Offensive coordinator) Steve (Kragthorpe) has done a great job.”

Jakhari Gore added a touchdown on the ground when he raced 30 yards for a score. Gore, Spencer Ware and Michael Ford each made tough runs in redzone situations.

Defensively, LSU forced two takeaways and mounted a goalline stand when Michael Brockers joined a host of Tigers on a fourth-and-one situation.

“I thought they (defensive line) played pretty well,” said Miles. “I enjoyed seeing Anthony Johnson in there a lot. I felt the line had a nice fourth down and less than a foot stop on the goal line that was a big play. Michael Brockers made some significant contributions on that play.”

LSU will practice on Tuesday, Wednesday and Thursday before concluding spring workouts with the National L Club Spring Game next Saturday, April 9 at 3 p.m. CT in Tiger Stadium. Admission to the game is free. There will be a chance for fans to win prizes and get autographs from over 25 former LSU football All-Americans.