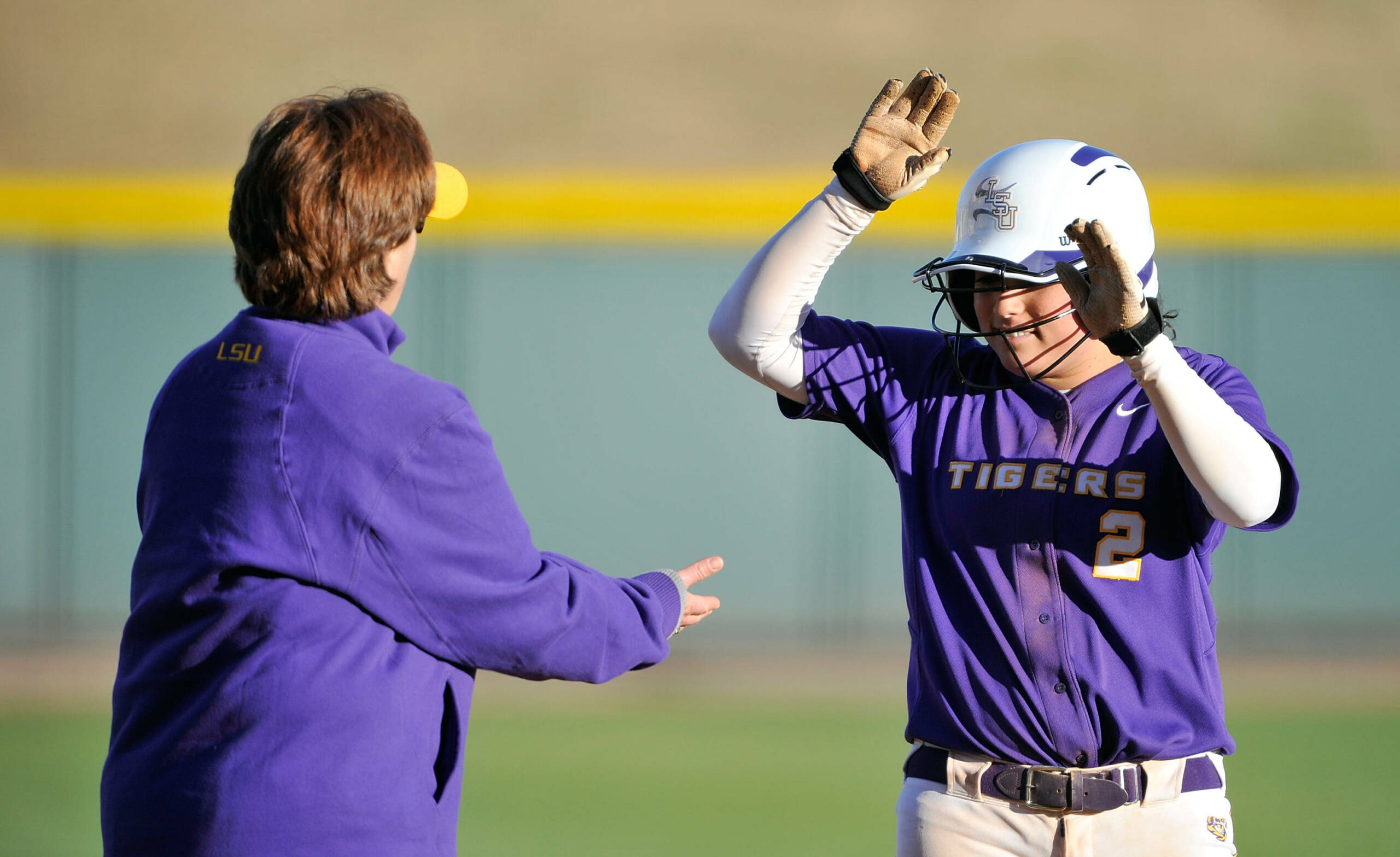 FAYETTEVILLE, Ark. – Juliana Santos equaled a program single-game record and provided a memorable 5-for-5 performance with three RBIs to lift the LSU softball team to a dominant 10-1 victory over Arkansas during the middle game of the series Saturday at Bogle Park.

Santos joined Lauren Castle as the only players in program history to reach the impressive feat. Castle tallied her 5-for-5 effort during a 15-9 triumph over Mississippi State on March 31, 2005.

“It’s awfully good to see Juliana swing the bat with a lot of confidence,” head coach Yvette Girouard said. “We always talk with the players about being a positive during an inning and doing anything you can to help your team be successful. She was the epitome of that today and got on-base a variety of different ways.”

“It was important for us as a team to stay focused, come out here and get the job done,” Santos said. “We’ve been working hard on offense and put our struggles from March behind us. The key for me has been swinging at my pitch.”

The Tigers (20-12, 4-6 SEC) also received a gem from Brittany Mack in the circle. The junior right-hander matched her season-high with 11 strikeouts and moved to 8-3 on the season. She fired in a magnificent 26-of-31 in the first-pitch strikes department and was touched up for one run on five hits.

“Brittany did a phenomenal job of locating her pitches and staying in control,” Girouard said. “Any pitcher that can work ahead like she did today controls the power in the circle. We never want to give that power to the hitter by falling behind.”

LSU platted single runs during the first, second and fourth innings on a trio of two-out RBI singles to grab a 3-0 advantage.

In the first inning, Simone Heyward coaxed a leadoff walk. She advanced to second base on a Santos infield single and crossed the plate an Anissa Young bloop single to left field to give LSU a 1-0 edge.

Santos garnered consecutive RBI singles during the second and fourth innings before the Tigers broke the game open with a five-run sixth inning.

Alex Boulet ripped a leadoff single through the middle to start the barrage. Two batters later, Santos dropped a perfect bunt back to the circle. A throwing error by Arkansas pitcher Kim Jones allowed both Boulet and Santos to motor around the bases to extend the LSU lead to 5-0.

The Tigers reset the table on back-to-back Ashley Langoni and Young walks. On a 3-1 offering, Tammy Wray belted a three-run blast over the left field fence to make it 8-0. It marked the third straight game that Wray has connected for a long ball.

Arkansas (10-27, 1-14 SEC) capitalized on a Jayme Gee leadoff double and scored its lone run on a Macy Burr infield single in the home half of the frame.

LSU fired back with two more runs in the seventh as Santos completed the historic day with another RBI single to centerfield. Even though her career-long seven-game hitting streak came to a close, Langoni added a RBI on a fielder’s choice for the final margin of 10-1.

Sunday’s series finale between LSU and Arkansas is on-tap for a 1 p.m. first pitch. The contest will be carried live on ESPN 104.5 FM in the Baton Rouge area with Patrick Wright and Matt Dunaway on the call.

Live audio and live stats also are available in the Geaux Zone on LSUsports.net along with in-game updates via the program’s social media pages at www.Facebook.com/lsusoftball and www.Twitter.com/LSU_Softball.

“We have to continue to hit the ball hard like we have been during the first two games of the series,” Girouard said. “We’ve been very efficient and very effective at the plate. It’s critical that we win tomorrow and complete the sweep.”