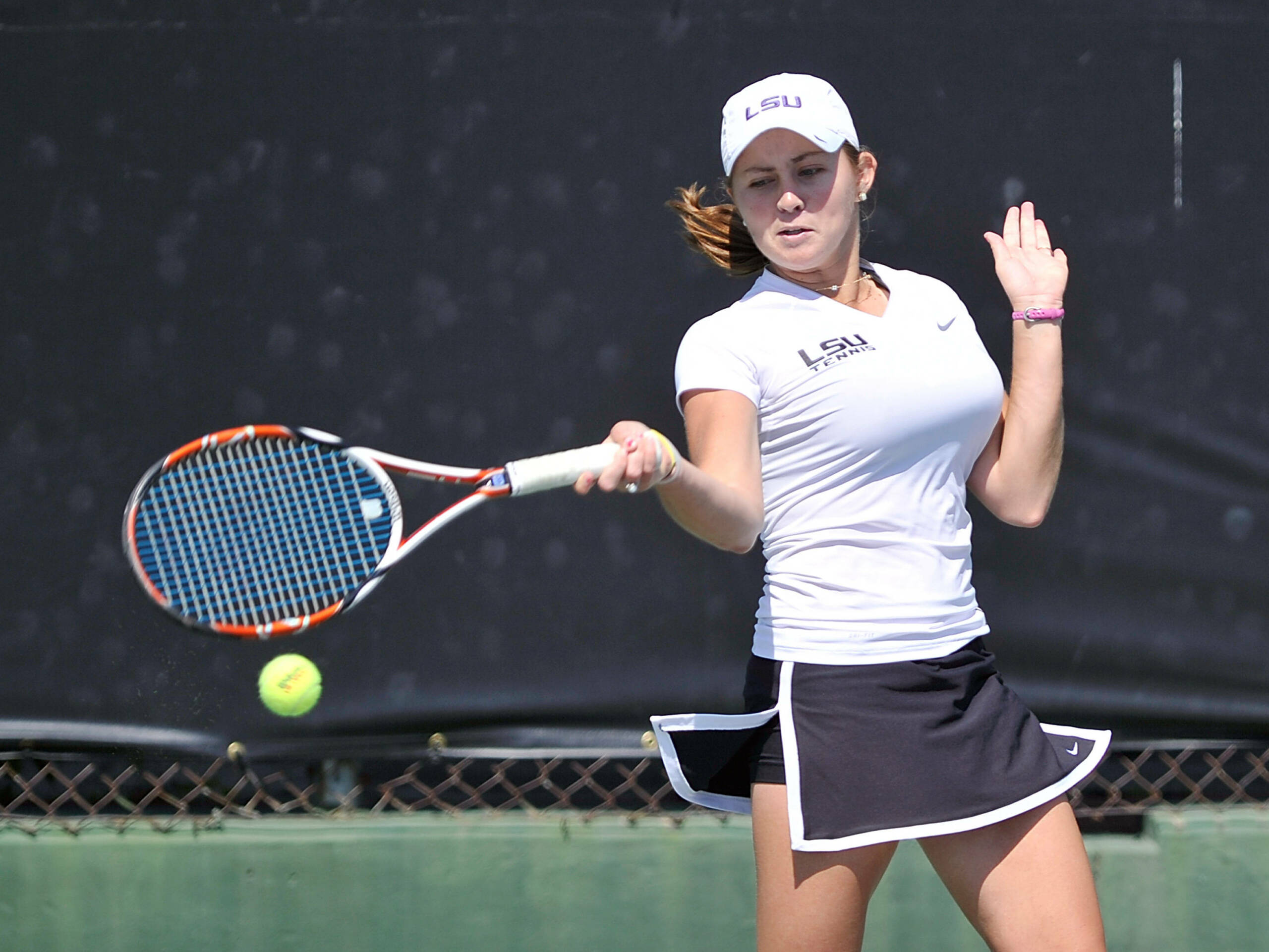 AUBURN, Ala. – The LSU women’s tennis team came from behind to knock off Auburn 5-2 on Friday afternoon at Yarbrough Tennis Center.

With the victory, the Lady Tigers snapped their two-match SEC losing streak and pushed their record to 10-9 overall, 4-3 in the SEC. Auburn fell to 4-14 overall and 0-7 in conference play.

“I am very disappointed in how we competed in doubles play,” said LSU women’s tennis coach Tony Minnis. “However, I am equally proud of the way that fought back in singles. Auburn came out and fought us from the start, so I am certainly happy that we came out with the win.”

For the first time this season, LSU won a match after failing to win the doubles point as Auburn won two of the three doubles matches.

LSU’s Kaitlin Burns and Ariel Morton faced off against Auburn’s Caroline Thornton and Taylor Cohen on Court 3. After falling behind early, the LSU duo pulled to within 4-3, but Thornton and Cohen won the next two games to stretch their lead to 6-3 and went on to win 8-5.

The Lady Tigers’ new ace doubles team of Whitney Wolf and Olivia Howlett collected their first doubles win with an 8-6 victory over Paulina Schippers and Olivia Bennett of Auburn on Court 1. After letting a 6-4 slip away, the LSU duo managed to pick up the last two games to win 8-6 and momentarily even things up.

Keri Frankenberger and Yvette Vlaar fought back from down 6-3 to tie the match 7-7 with Plamena Kurteva and Jacqueline Kasler on Court 2. With the other two matches final, the doubles point came down to the final two games. Unfortunately for LSU, Kurteva and Kasler managed to claim the last two games to take a 9-7 victory and corral the doubles point for Auburn.

The Lady Tigers quickly turned the tables on Auburn in singles play. Vlaar built a 3-1 lead in the first set and held off Auburn’s Maria Arechavaleta 6-3. The LSU freshman carried her momentum into the second set as she built another early lead and went on to the 6-3, 6-2 victory.

Back in the lineup after missing the Tennessee match due to injury, Wilson picked up where she left off prior to being forced to retire last Friday against Georgia. The Mobile, Ala., product picked up her team-leading 12th spring season win, defeating Kurteva 6-4, 6-4 on Court 4.

LSU’s Howlett notched her first victory as a Lady Tiger as she knocked off Thornton on Court 2. After dropping the first set 6-2, Howlett seized control of the match in the second set with a 6-1 set victory and claimed the match by taking the final set 6-4 for the 2-6, 6-1, 6-4 win.

Burns took the first set 6-4 from Bennett on Court 4. The LSU sophomore went up 4-0 in the second set and seemed to be on her way to a comfortable win. However, the Auburn freshman battled back and eventually forced a second-set tiebreaker. With the overall match victory within grasp, Burns came through for the Lady Tigers and won the tiebreaker to take the match 6-4, 7-6 and clinch the match for LSU.

After Wolf dropped a hard-fought three-setter with Schippers on Court 1 by a 6-4, 3-6, 6-3 score, Frankenberger and Auburn’s Kasler provided the day’s final drama. After splitting the first two sets, the two engaged in a first-to-10-point third set in which the LSU sophomore dominated with a 10-2 victory to claim a 7-5, 6-7, 1-0 (10-2) win to close out the day.

The Lady Tigers will conclude their weekend road trip when they travel to Tuscaloosa to face Alabama on Sunday at 1 p.m. CDT. Live stats will be provided and can be followed at LSUsports.net/livestats.